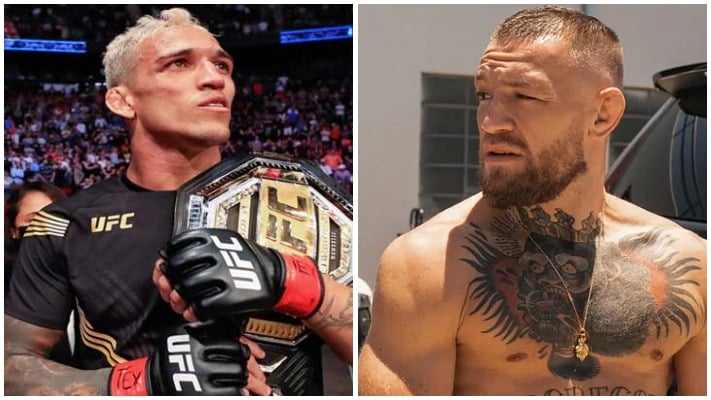 Conor McGregor already has one eye on what’s next ahead of his eagerly anticipated trilogy fight with Dustin Poirier which will take place at UFC 264 on July 10.

The Irishman has exchanged wins with Poirier in their two-fight series.

In 2014, McGregor quickly knocked out ‘The Diamond’ during his famous featherweight run that ended in the spectacular one-punch KO of the long-time titleholder, Jose Aldo.

Earlier this year, Poirier avenged that loss in emphatic fashion at UFC 257. The former interim lightweight champion wrestled early before utilizing leg kicks and elite-level boxing to close the show inside two rounds.

Despite coming into UFC 264 off the back of a devastating defeat, McGregor is confident he’ll breeze by Poirier and move on to a lightweight title fight with Charles Oliveira.

“It’s (Dustin Poirier’s) a dead body to me,” McGregor told The Mac Life. “I’m already thinking that Allegiant Stadium is where we’re heading. I feel maybe Christmas time, I don’t know, we’ll talk afterward. But that world title will be contested in the Allegiant Stadium here in Las Vegas, I would imagine so. I like the look of it. It’s called the Death Star as well, that’s what I’m feeling like right now a Death Star.

“I’ll be the twelfth lightweight titleholder, and this is my twelfth UFC main event this Saturday,” McGregor added. “And I’m aiming for my twentieth mixed martial arts knockout.

‘Do Bronx’ will be in attendance at UFC 264 to see who he’ll make his first title defence against. Oliveira survived the early onslaught of former Bellator champion, Michael Chandler, to claim the title vacated by Khabib Nurmagomedov who cemented his retirement from the sport earlier this year.

Do you want to see Conor McGregor take on Charles Oliveira for the title at the Allegiant Stadium later this year?