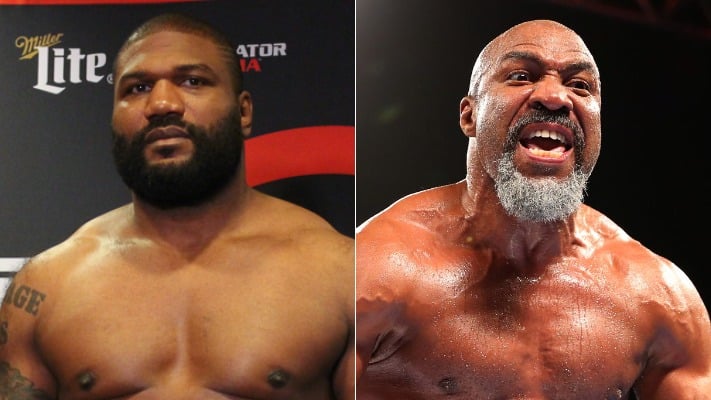 Former UFC light heavyweight champion Quinton “Rampage” Jackson and former heavyweight boxing champion Shannon Briggs got into a bit of an Instagram squabble just before the weekend and could be the opening chapter to a potential fight between the two.

Jackson and Briggs have both been away from the public eye, with Jackson still technically a free agent after his time in Bellator, while Briggs has talked about a potential boxing comeback over the past few years. The trend of old combat sports legends making a return to the sport they used to own has opened up opportunities for competitors like Jackson and Briggs to return.

Jackson and Briggs went back-and-forth in a pair of Instagram posts, and things got testy.

“I’m not sure if [Shannon Briggs] thinks im a easy fight because I’ve never boxed before or if he just misses getting his ass kicked,” Jackson said in one post. “Either way I’m bout it. Just letting ya know champ i ain’t scared, tell yo peoples to make it happen.”

Briggs sounded open to the idea of the two violent fighters going to battle in the ring.

“[Rampge] we can mix it up champ,” Briggs posted. “No problemo senorita. The first round boxing second round MMA. Third round boxing until one of [us is] in the hospice.”

Jackson was released from Bellator back in late 2019 following his heavyweight fight with Fedor Emelianenko. He ended up losing three of his last four fights in the promotion including his knockout loss to Emelianenko.

The 49-year-old Briggs was a mainstay among the best heavyweights in boxing during his illustrious career. He has big wins over George Foreman and John Sargent among many others.

Jackson has been in the fight game for a long time as well, after a successful run in the UFC’s light heavyweight division which included getting the belt at UFC 71 with a highlight knockout over Hall of Famer Chuck Liddell. Before that, he had successful runs in Pride and King of the Cage during the beginning of the rise in popularity of MMA.

What do you think about a potential boxing match between Rampage Jackson and Shannon Briggs?