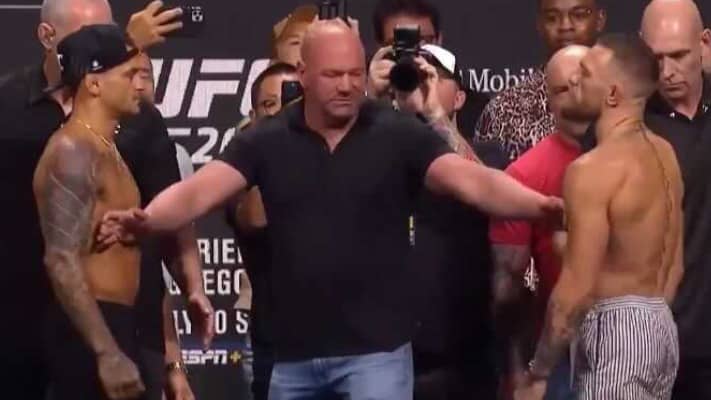 We are less than 24 hours away from the end of the trilogy between UFC lightweights Conor McGregor and Dustin Poirier after the two stars starred each other down at the UFC 264 ceremonial weigh-in.

As many times there is when it comes to a McGregor fight, there is a lot on the line for both men as well as for the UFC lightweight division as a whole. The winner will realize superstardom once again, and will more than likely get the next shot at the UFC lightweight title against Charles Oliveira later this year.

The final faceoff before the UFC 264 main event didn’t feature as many theatrics as their last faceoff at the pre-fight press conference on Thursday when McGregor attempted to kick Poirier after the two had some verbal back-and-forth in the middle of T-Mobile Arena.

But it sure lived up to the hype in terms of the intensity. Both men hit the scales this morning and appeared to be completely stoic and focused ahead of their trilogy finale. It was also the first full-capacity ceremonial weigh-in held in Las Vegas since the beginning of the COVID-19 pandemic in early 2020.

The event itself will be the first full-capacity UFC event held in Las Vegas in general in a little over a year, and the fourth full-capacity pay-per-view since the UFC resumed full-business earlier this year. While there isn’t an official International Fight Week held by the promotion this year, this event is an unofficial stand-in after a challenging 2020 around the world.

McGregor has lost back-to-back lightweight fights since his win over Eddie Alvarez at UFC 205. Earlier this year, Poirier knocked him out in brutal fashion to even the rivalry at one win apiece. It is most certainly the end to one of the most legendary trilogies in UFC history.

What is your final prediction for UFC 264: Dustin Poirier vs. Conor McGregor 3?