In the England corner, Mason Mount, Reece James and Ben Chilwell. In the Italy corner, Jorginho and Emerson Palmieri. Chelsea are good. And at least two of those five men will become the latest to win the Champions League and a major international tournament in the same summer, following…

Christian Karembeu (1998): Real Madrid and France
“I had never seen anyone with a greater work capacity,” Sven-Goran Erikssen once said of Karembeu. The all-action midfielder struggled on the whole having arrived at Madrid in the summer of 1997, saving his best displays for the Champions League.

He scored in both quarter-final legs against Bayer Leverkusen and in the semi against Borussia Dortmund. He played the full 90 minutes in the final as Predrag Mijatovic scored the winner against Juventus, who had Karembeu’s compatriots Didier Deschamps and Zinedine Zidane – the World Cup hero of that year – in their ranks.

Having been dropped at the last minute ahead of the 1998 World Cup, Anelka headed into Euro 2000 as Les Bleus’ first-choice marksman. But he failed to score in the tournament, notching assists in the opening group game and the semi-final win over Portugal, before being left on the bench for the final as Roger Lemerre turned to David Trezegeut, who came on to score the memorable winner.

Roberto Carlos (2002): Real Madrid and Brazil
He threw the ball very hard indeed to assist Raul for the opener against Bayer Leverkusen, then picked out Zidane on the edge of the box for that goal.

Peak Carlos then played every minute of Brazil’s World Cup-winning campaign, save for the dead rubber group win over Costa Rica.

Juan Mata (2012): Chelsea and Spain
Juan Mata would surely have been a pivotal player for any international side other than Spain in 2012 – he had some pretty tough competition in midfield. As it was he featured for just three minutes in the entire tournament, in the final, and scored. Lovely stuff.

He was pivotal to Chelsea throughout their crazy Champions League campaign. His penalty was saved in the final shootout but they wouldn’t have made it that far had it not been for his 88th minute corner which Didier Drogba powered in at the near post.

Fernando Torres (2012): Chelsea and Spain
One of Torres’ most difficult seasons was also his best. His struggles at Stamford Bridge were punctuated by the extreme highs of that Nevgasm-inducing goal at the Nou Camp and a goal and an assist against Italy in a 15-minute cameo in the Euros final.

Sami Khedira (2014): Real Madrid and Germany
Khedira tore both his cruciate and medial knee ligaments in November 2013, but made a remarkable recovery to return just in time to start Real Madrid’s 4-1 win over city rivals Atletico in the Champions League final.

He was then a vital cog in Germany’s run to the World Cup final, before another injury in the warm-up cost the poor guy his place in the final.

Cristiano Ronaldo (2016): Real Madrid and Portugal
He must have thought his chances of the club and international double were over as he limped off the pitch after 25 minutes of the final against France. Most of us did. But he didn’t account for Eder. None of us did.

He nearly broke his own 17-goal Champions League record that season, scoring 16 on the way to the final in which his shootout penalty sealed another win over Atletico. 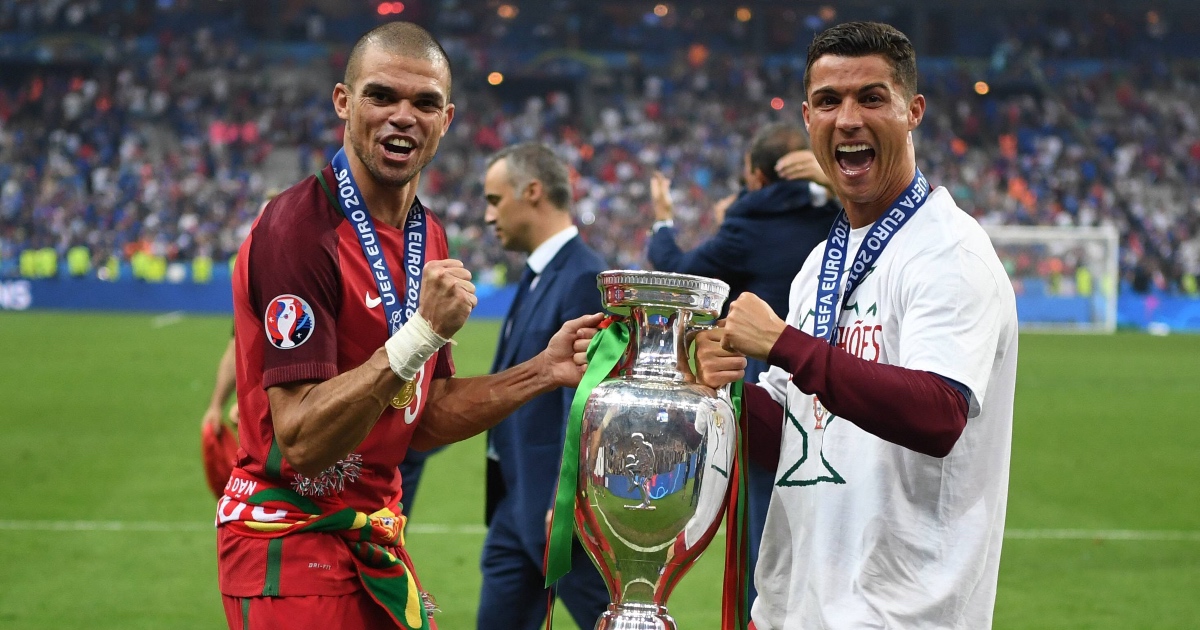 Pepe (2016): Real Madrid and Portugal
While Ronaldo banged in the goals, Pepe was tweaking nipples and shouting in faces.

Raphael Varane (2018): Real Madrid and France
Varane played every minute of France’s World Cup-winning campaign in 2018 to end an outstanding season at the culmination of an incredible run of Champions League glory for Real Madrid.