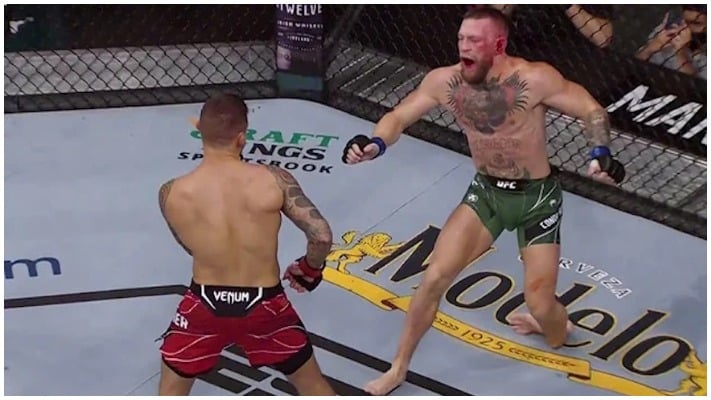 The UFC 264 trilogy fight between Dustin Poirier and Conor McGregor had an inconclusive and unfortunate ending.

‘Notorious’ looked good early, rattling off leg kicks and put hands on Poirier. ‘The Diamond’ quickly grew into the fight and began to find some success of his own. Poirier began to dominate round one after McGregor decided to jump guard for a choke attempt. When the submission failed the former interim lightweight champion began to hammer away with ground strikes until the final seconds of the opening frame.

As the final few seconds ticked away both men popped back to their feet. They both threw punches simultaneously and missed. McGregor dropped to the floor and immediately pointed to his ankle. Poirier swarmed for the final few seconds, but the Irishman was able to finish the round before the fight was waved off by the doctor at ringside.

It quickly became clear that McGregor had suffered a nasty break to his ankle or leg. And now, we have conclusive slow-motion footage that shows in graphic detail how McGregor’s shot at redemption came to a disastrous end.

Do you think Conor McGregor will be able to come back from this injury? Will we see a fourth fight with Dustin Poirier?