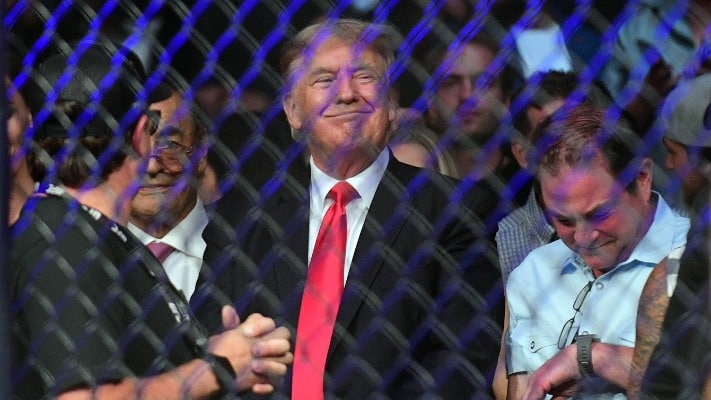 Whether you support him, hate him, or are indifferent, the crowd at UFC 264 had a little bit of everything when it came to their reaction to former U.S. President Donald Trump entering T-Mobile Arena to watch the fights.

Trump became the first U.S. President to attend a UFC event back at UFC 244 when welterweight stars Nate Diaz and Jorge Masvidal fought in the main event for the BMF belt. At the Conor McGregor-Dustin Poirier trilogy, Trump and his secret service detail sat directly behind UFC president Dana White to watch the last two fights of the card.

As per usual with a Trump public appearance, the fan reception was ranged from “USA” chants to audible boos for the 45th President of the United States.

Politics aside, it’s certainly a milestone that the UFC is able to garner the attention of politicians and high-level celebrities for their events. It seems like yesterday that former Arizona senator John McCain (R. AZ) referred to mixed martial arts as “human cockfighting”.

Nowadays, as the sport of MMA increases sharply in popularity, so does the notoriety of people in the seats.

Trump and a full-capacity crowd were treated to quite an eventful night at UFC 264. In the main event, Poirier earned a wild doctor’s stoppage victory after McGregor fractured his left ankle towards the end of the opening round. Just hours after the event, McGregor would undergo surgery on a fractured tibia at a nearby hospital.

Trump is apparently a massive fan of combat sports, and more specifically the UFC and White. He has a true fan in the form of UFC welterweight contender Colby Covington, who visited the White House on numerous occasions during Trump’s time in DC.

After losing the 2020 Presidential Election to Joe Biden, Trump is still receiving mixed reviews from the general public. But one thing is for certain, he’ll more than likely continue to be a presence at UFC pay-per-views in the future.

Were you surprised by Donald Trump’s reception at UFC 264?