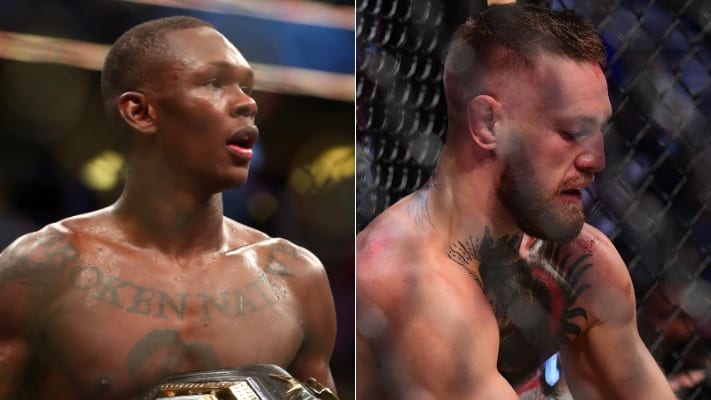 UFC middleweight champion Israel Adesanya and Conor McGregor used to be under the same management, and have become friends over the years. After McGregor’s brutal leg break at UFC 264, Adesanya provided his live reaction while watching the fight to McGregor’s injury suffered against Dustin Poirier.

Adesanya is fresh off his dominant performance against Marvin Vettori at UFC 263 earlier this summer, and will more than likely face former champion Robert Whittaker in a title rematch later this year. He has taken the UFC by storm since earning the belt and is also a prominent presence on social media and YouTube.

Adesanya posted a recent video to his YouTube channel in which he is seen live reacting to the graphic injury McGregor suffered in the UFC 264 main event.

“Yeah, it was a good fight,” Adesanya said in the video. “I like the way Conor opened up. This is one of the reasons I don’t jump for guillotines because Eugene says if you fail a guillotine, you’re on bottom. That’s the problem. And it was tight. It was tight, but the cage was in the way, so Dustin was able to stop and defend by not letting him get his leg wrapped and put him in guard.”

“That was just a freak accident. Dustin reckons it was a check, Conor reckons it wasn’t. Yeah, crazy fight. They’re definitely gonna do it again. They’re gonna run it back and then we’re all gonna watch.”

Adesanya can be seen audibly unnerved at the sight of McGregor’s left leg collapsing from underneath him towards the end of the opening round against Poirier. Before that, McGregor had thrown a series of vicious leg kicks but ended up fracturing his lower tibia after getting hit by an elbow off of a kick.

With the win by doctor’s stoppage, Poirier will challenge UFC lightweight champion Charles Oliveira for the belt later this year. McGregor underwent successful surgery this weekend on his fractured tibia and is estimated to be out 6-7 weeks at the very least.

What was your reaction to Conor McGregor’s freak injury at UFC 264?