Conor McGregor Proves He Was Injured Before UFC 264 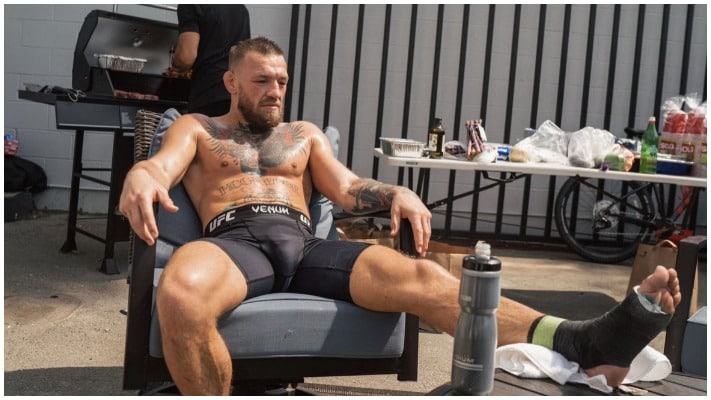 Conor McGregor has released a series of photos on social media that prove he was suffering with an ankle injury prior to UFC 264.

‘Notorious’ suffered a horrific leg break at the end of the first round of his third fight with Dustin Poirier this past weekend.

Since the fight ended fans and pundits have been speculating about the exact moment McGregor suffered the injury.

On Thursday, the Irishman looked to end that debate by confirming he entered UFC 264 with stress fractures in his leg, he said.

“Everyone keeps asking me at what point did the leg break? Ask [UFC president] Dana White, ask the UFC, ask Dr [Jeffrey] Davidson, the head doctor of the UFC. They knew… I had stress fractures on my leg going into that cage. There was debate about pulling out because I was sparring with no shin pads and I kicked the knee a few times, so I had multiple stress fractures in the shin bone above the ankle.”

Some people aren’t buying into this narrative, finding it hard to believe McGregor would use such a kick heavy game against Poirier despite the fact his leg was compromised.

The former dual-weight champion has clearly heard to doubters and looked to silence them with a series of photos of him nursing the ankle injury throughout the UFC 264 fight camp.

“All you pull out merchants wouldn’t last 13 seconds in my world,” McGregor wrote alongside the images. “My 4 part Netflix docuseries coming soon has the entire bts. I’m gonna title it “Mad Mac’s: Fury Road. Wouldn’t change my journey for no ones! The greatest of all time!”

Do you believe Conor McGregor entered UFC 264 with a seriously comprised leg?