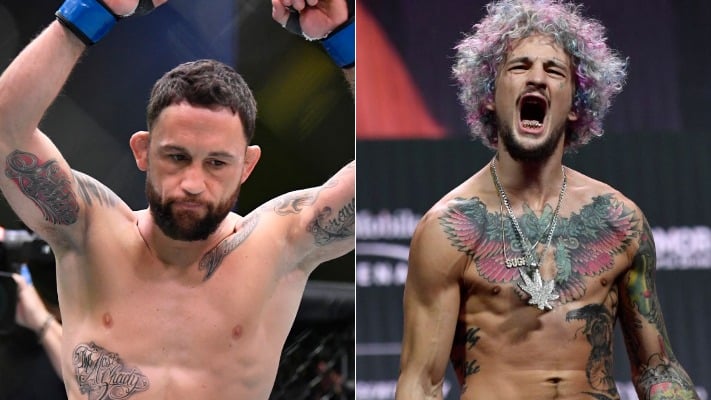 Frankie Edgar is looking to stay in the bantamweight division, and he has an idea who he would like to face next.

The former UFC lightweight champion moved to his new division last August, after spending the previous four years as a featherweight. He’s had mixed results since then, picking up a win over longtime contender Pedro Munhoz in his debut, only to lose to Cory Sandhagen in his next bout by highlight reel knockout in February.

In an interview with MMA Island, Edgar said that he’s looking to get things back on track by the end of the year, and he believes a matchup against Sean O’Malley would do just that (H/T MMA Mania).

“I know a lot of people are tied up right now,” Edgar said. “O’Malley just fought, won, pretty dominant fight. He can definitely be a matchup I see happening, maybe before this year ends. A lot of people have fights coming up so if he’s free, I’m free, makes sense to me.”

‘Sugar’ O’Malley is coming of a three-round destruction of late notice replacement Kris Moutinho. He was originally scheduled to face Louis Smolka, who was forced to withdraw due to injury. A number of notable fighters in the division offered to step in to take the fight, but the UFC opted to go with Moutinho, disappointing them and the fans. Many feel that O’Malley has been given favorable matchups, and the pairing didn’t do anything to quell those beliefs.

In Edgar, O’Malley would face easily the biggest name and toughest opposition he has in his career. Though ‘The Answer’ is only 2-4 in his last 6 over multiple divisions, he’s exclusively faced some of the best fights on the planet for over a decade. He’s appeared in 9 UFC title fights, and at just under 8 hours, he hold the record for most time in the UFC octagon. Edgar is also currently ranked #7 in the official UFC standings.

A fight between the two would be a classic veteran vs prospect bout that would headline any Fight Night or be featured highly on a pay-per-view. We know that Edgar is willing to put the fight together. Now it’s just a matter of seeing if it interests O’Malley or the UFC.

Would you like to see Frankie Edgar face Sean O’Malley next? Who else should he fight?