Michael Bisping ‘Respects’ TJ Dillashaw For Owning Up To Cheating 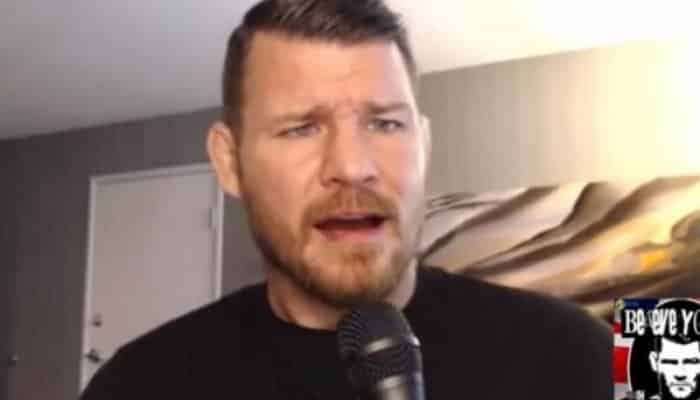 T.J. Dillashaw is making his long-awaited return to the octagon after a two-year USADA suspension.

Dillashaw waited for his opportunity to seek out a top-five bantamweight and his wait was granted by virtue of by #2 ranked Cory Sandhagen.

The two will have the cage locked behind them this Saturday at UFC Vegas 32. Amid fight week and even prior, Dillashaw has been very open with his EPO use, the same performance-enhancing drug that landed him a two-year suspension.

Through this openness, he gained an unlikely fan; UFC Hall of Famer and infamous steroid naysayer Michael Bisping.

Bisping remains extremely outspoken in his post-fight career against the use of performance-enhancing drugs in the sport of mixed martial arts. This stems back to Bisping’s fighting days when he faced steroid-using Vitor Belfort. He posted an 8-minute YouTube video about Dillshaw’s return and his overall thoughts about his steroid use.

Bisping said about Dillashaw, “T.J. Dillashaw has served a two-year suspension and he came out and he owned up to it, and I’ve got to say, I respect that. I do. Everybody knows my stance on steroids but the fact that he came out and he owned up to it, he put his hand up and said, ‘Yeah, I cheated, the pressure got to me,’ it’s refreshing. It’s refreshing to see. Most people make up some nonsense. They say it was some cream or a supplement of whatever. They come out with outlandish things to try and make up for it rather than just saying, ‘Hey, I did it. You got me.’ So I respect that.”

He goes on to say, “He served his two-year suspension. You may have different thoughts on that. Maybe you think he shouldn’t be here, he should be banned for life, whatever that is, but that doesn’t matter because the punishment was dealt, it was a two-year suspension, and he served that.” (Transcribed by MMA Fighting)

With Michael Bisping‘s vote of confidence, will T.J. Dillashaw prove at 35 years old that his title reign was not a result of prior substance use?