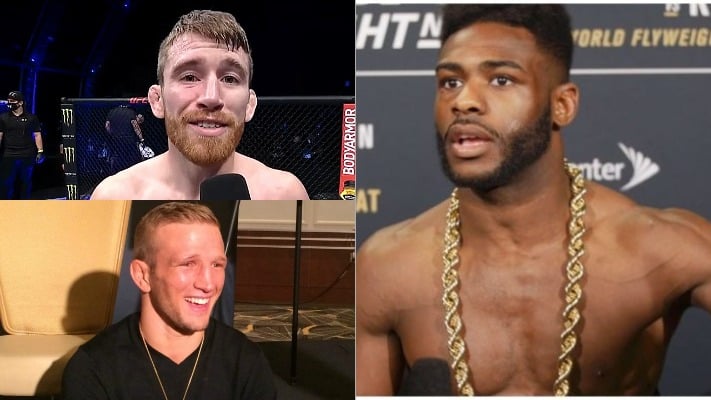 UFC Bantamweight champion Aljamain Sterling has had some interesting things to say in the buildup to the T.J. Dillashaw and Cory Sandhagen main event this weekend. It will be former bantamweight king Dillashaw’s first fight coming off of his 2-year suspension while the #2 ranked Sandhagen is coming off a KO of the year candidate of Frankie Edgar in his last fight.

Speaking on his Weekly Scraps podcast earlier this week, Sterling talked about the weekend’s main event saying that a win on Saturday would get Dillashaw a title shot but that Sandhagen might still have to win one more in order for him to get a shot.

“I’m very excited to see what this one brings,” Sterling said. “I’m very excited to see what T.J. Dillashaw shows up because, you beat T.J. Dillashaw, does that give you a title shot? I don’t know. But if T.J. beats him, does that give T.J. a title shot? Absolutely. It should absolutely give T.J. a title shot. But in the sense of the other way that I’m looking at it, I don’t know what this win really does for Sandhagen other than getting another marquee name added to his resume.”

Sterling would go on to talk about how he stopped Sandhagen quickly when they fought at UFC 250 in June 2020. Sterling said that beating Dillashaw may not actually mean all that much, given that he’s been inactive for 2.5 years and according to Sterling, was cheating long before he got caught.

“T.J.’s been suspended, he’s been out of competition for two years,” Sterling said. “He cheated, he’s been cheating for a very long time, ask his teammates. This is something that has been disclosed to me years ago and of course, you don’t want to be the whistleblower and not have any evidence but the evidence has been his teammates talking about it, his former teammates talking about it, and of course, now being caught, it’s pretty safe to say that where there’s smoke there’s fire.”

While Sterling clearly doesn’t believe Dillashaw about his PED use, should he beat Sandhagen on Saturday, the champion is willing to give Dillashaw a crack at the title after rematching with Petr Yan later this year. Sterling, however, ultimately believes Sandhagen will be the one getting his hand raised.

“I think it’s gonna be a good stylistic matchup,” Sterling said. “A guy who’s so much taller, rangier, fights with so much calmness and now fighting with a little bit more stank in terms of brutality, trying to really hurt guys in there. I think this is gonna be a very, very fun fight to watch. If I had to put my money on it, I gotta say Sandhagen gets the job done. These guys used to train together and I do believe them formally training together gives him some type of confidence that he understands what he’s dealing with going in there. If T.J.’s truly off the stuff, I like Sandhagen’s chances even better in this one.” (Transcribed by MMA Fighting)

It’s clear there is animosity amongst the top contenders of the bantamweight division and we’ll have a clearer idea about who will have a title shot in their future after Saturday night’s main event. UFC Vegas 32 takes place at the UFC Apex on Saturday.

Do you agree with Aljamain Sterling? Does TJ Dillashaw have more to gain at UFC Vegas 32?