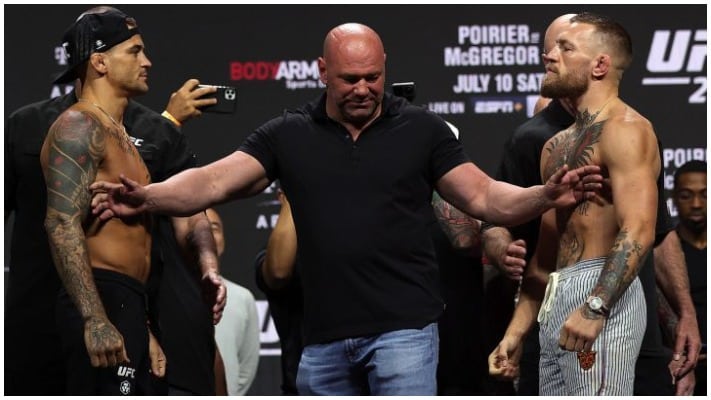 Dustin Poirier has finally reacted to Conor McGregor’s claim he was injured heading into their trilogy fight.

The former dual-weight champion suffered a nasty leg break at the end of round one in the UFC 264 main event.

Post-fight, McGregor said that his leg was already compromised heading into the fight although this claim is yet to be corroborated by anyone.

“Right off the bat, mentally, I just feel like it’s weak,” Poirier said on “THE FIGHT with Teddy Atlas.” “It’s weak, it’s excuses, but I’m trying not to read too far into it or go down these days of reading what videos are out and what people are saying, because I’m back home with my family. It’s a win on my record. I know I did what I needed to do in the fight, pre-fight, in my training camp.

“I crossed and checked all the boxes I needed to check, gave it my all and then went out there and – like we’re saying, it’s noise. Whatever people are gonna say or he’s gonna say, it is what it is. I’m healthy, I’m safe, I’m back home, have another win on my record, and I’m still the No. 1 contender, so those are facts.”

“If you’re training for a fight, you’re going to go into fight week with something going on. Whether it’s an elbow, a wrist, a hand, an ankle, something’s gonna be busted up.”

McGregor enjoyed early success at UFC 264 by utilizing a heavy kicking game which seems a strange tactic to employ if you are suffering from stress fractures in your leg.

“He was throwing kicks by themselves, single kicks by themselves directly on my knee. Maybe it was in his head that he needed to come out and show me that he can do it too, because I tore hiss leg up in the second fight. I have no clue what him and his coaches were thinking.” (Transcribed by MMA Junkie)

Do you agree with Dustin Poirier? Is Conor McGregor making excuses for losing at UFC 264?