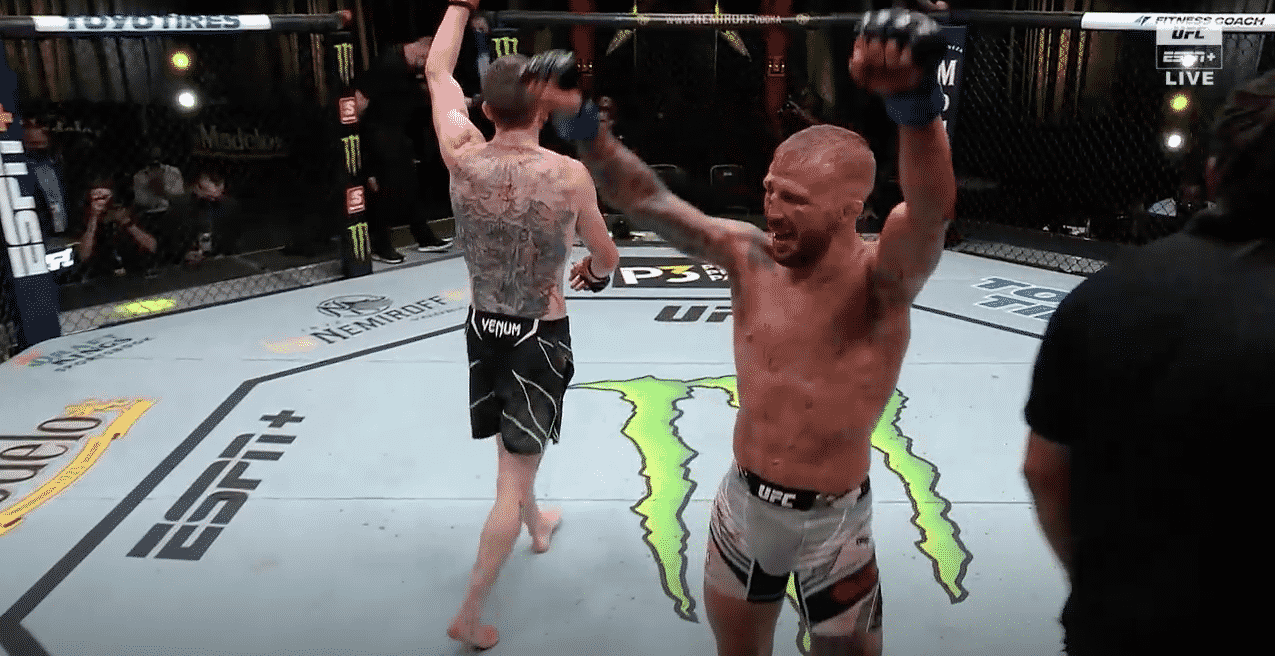 Former two-time UFC bantamweight champion, T.J. Dillashaw is back from his two-year USADA suspension — and back in the winner’s enclosure, via a close, back-and-forth split decision victory over the #2 ranked contender, Cory Sandhagen to headline UFC Vegas 32 at the UFC Apex facility.

Some early pressure from former champion, Dillashaw sees him run right into a flying-knee from Sandhagen, who then attempted to set up a reverse triangle to which the former champion defended. Cut on the bridge of the nose of Dillashaw.

Some real interesting scrambles in the opening round as Sandhagen Granby rolls through Dillashaw’s takedown attempts and looks to lock up an armbar or heel hook. Multiple stern warnings from Herb Dean for fence grabs from Dillashaw before the end of the round.

Dillashaw dealing with some issues with his left knee off the back of a heel hook attempt from Sandhagen in the first as he enters the second frame. Patient circling approach from the #2 ranked contender as he drops the former champion with a short left hook.

Dillashaw suffered a rather large laceration to his right eye as a result of a right hook from Sandhagen, resulting in a brief stoppage as the Octagon-side doctor checks the cut. Second round in the books, most likely for Sandhagen to boot.

Some whipping right-hand counters from Sandhagen get the attention of Dillashaw in the third, who is noticeably wiping away the blood leaking into his right eye. A good end to the round for Dillashaw sees him pressure Sandhagen, forcing a miscued takedown attempt from the Aurora native — prior to a late shot after the buzzer from Sandhagen.

More pressure from the former champion in the fourth round, although Sandhagen most certainly having a better going in this frame as he sticks on the outside and looks to pick Dillashaw apart. Massive spin at the end of the round clips Dillashaw as Sandhagen launches a back-fist.

Some more control for Dillashaw in the fifth as the former champion takes Sandhagen’s back and forces him back to the fence as he managed to do so often tonight. Another hugely close round as Dillashaw pressures and pressures Sandhagen who continues to stick on the outside and attempt to land counters.

Take a look below as Dillashaw scores a comeback win over Sandhagen.