Holly Holm Returns To Featherweight To Take On Norma Dumont 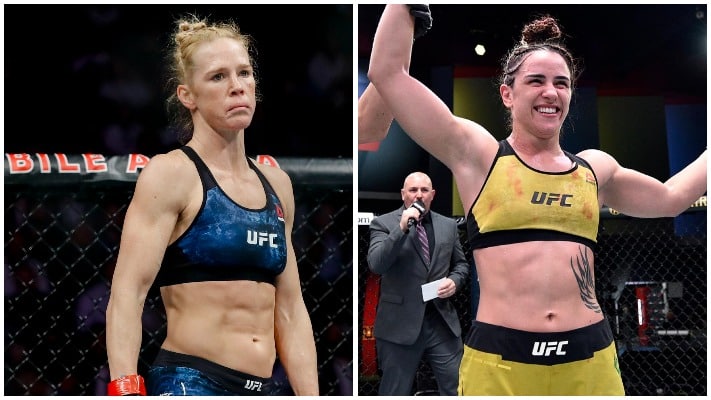 Holly Holm will step back up to featherweight for her next fight which will come against Norma Dumont on October 16 according to a report from MMA Fighting.

The former UFC bantamweight champion hasn’t fought since picking up a lopsided decision win over Irene Aldana in October 2020. Holm was supposed to face off against Julianna Pena earlier this year but was forced out of the bout after being diagnosed with hydronephrosis. Pena has since been booked in a 135lb title fight against Amanda Nunes. The two women will square off over five rounds at UFC 265 on August 7.

Holm has twice fought for UFC gold at featherweight. ‘The Preacher’s Daughter’ fell short in her bid to become the inaugural 145lb UFC champion when she squared off against Germaine de Randamie in 2017. Later that year, Holm again fell short in another featherweight title fight, losing to Cris Cyborg via unanimous decision at UFC 219.

The 39-year-old will now return to the division for the first time since 2018 when she picked up a relatively easy win over the former Invicta FC champion Megan Anderson.

Dumont will look to cement herself as the top 145lb contender by stretching her current UFC win streak to three. After being dominated by Anderson in her promotional debut Dumont has bounced back to pick up wins over Ashlee Evans-Smith and Felicia Spencer.

How do you think Holly Holm vs. Norma Dumont will play out?