Khabib Nurmagomedov Weighs In On Boxings Pound For Pound Debate 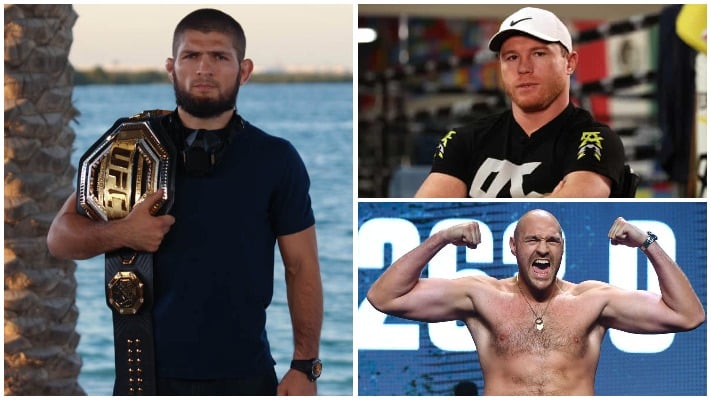 Khabib Nurmagomedov has revealed who he believes is currently the best pound-for-pound fighter in boxing.

Saul ‘Canelo’ Alvarez currently tops every reputable boxing pound-for-pound list after moving through several divisions seamlessly and becoming the biggest star in the sport. The 31-year-old is currently aiming to be the first Mexican ever to become an undisputed champion. Canelo currently holds three of the four super-middleweight belts and is hoping to take on IBF titleholder, Caleb Plant, for his chance at history later this year.

In a recent interview with ES News, Nurmagomedov went against the general consensus and named Tyson Fury as the best pound-for-pound boxer.

‘The Gypsy King’ is set to take on Deontay Wilder for the third time on October 9. Fury had been targeting an undisputed fight with his compatriot, Anthony Joshua before an arbitrator ruled that he owes ‘The Bronze Bomber’ a trilogy bout.

Before that, Joshua will take on his WBO mandatory challenger Oleksandr Usyk on September 25. If both men come through their respective fights unscathed, we may finally get the eagerly anticipated British blockbuster – something Khabib is looking forward to.

“I know, I know. Like winner, they have to fight versus Tyson Fury-Wilder winner,” Nurmagomedov said. “Like a semifinal. But right now, I believe Tyson Fury is the best.”

The former UFC lightweight champion was recently linked to a boxing match against Floyd Mayweather. It’s claimed that Nurmagomedov turned down payday in the region of $100 million for the potential fight as he wishes to remain retired from combat sports.

Do you agree with Khabib Nurmagomedov? Is Tyson Fury the best pound-for-pound boxer?

5 bold predictions for the Steelers against the Browns