Pryor vs Cervantes. “The Hawk” Is A World ChampionThe Fight City

The Montreal Olympics in 1976 was a galvanizing moment for boxing in America, an event that saw the sport gain new stars and new fans, as the U.S. amateur team became one of the biggest stories of the games. Michael Spinks, Leo Randolph, Howard Davis Jr., Leon Spinks and Ray Leonard all won gold medals and soon after signed lucrative contracts to turn pro. Within a few short years Randolph, Leonard and Leon Spinks had won world titles, while Davis and Michael Spinks ranked as top contenders in their respective divisions.

But right behind all those new stars and feel-good stories were the boxers who had just missed having a chance to hear the cheers at the Olympics. Aaron Pryor had wanted to be on that podium in Montreal as much as any other young pugilist, but he dropped a close decision to Davis in the Olympic Trials. His record of over two hundred amateur wins, his reputation, and his performance against Davis, had earned him a spot as an alternate on the team, but after the closing ceremonies everyone knew who Howard Davis Jr. was; few had heard of Aaron “The Hawk” Pryor. A young Aaron Pryor: all feared “The Hawk.”

Pryor immediately turned pro and went about laying waste to the lightweight division, setting a breakneck pace to compliment his swarming, all-action style. In less than three years he had racked up nineteen straight wins, all but two by knockout. He was still “Aaron Who?” outside of his native Cincinnati, but the top contenders in the lightweight division were definitely aware of both his presence and his penchant for overwhelming opponents with his fearsome attack.

Which led to a new problem for Pryor: no one wanted to fight him. His activity rate plummeted and so did his bank account. Scrambling for both matches and income, Pryor resorted to working as a sparring partner for none other than Howard Davis Jr., but he lost that job when he decked the gold medalist during a training session.

Meanwhile, boxers Pryor had beaten in the amateurs were getting big money deals and national television exposure. He had defeated Thomas Hearns but now “The Hit Man” was an emerging star, his bouts broadcast regularly on national television. Pryor had defeated Hilmer Kenty in the amateurs no fewer than thirteen times, seven of the wins by stoppage, yet it was Kenty, not Pryor, who got the shot at WBA lightweight champ Ernesto Espana. Matchmaker Gil Clancy even offered Espana an extra fifty grand to fight Pryor instead of Kenty, but such was the reputation of “The Hawk” that the Venezuelan turned him down. Instead he took on Kenty and lost by ninth round stoppage in a one-sided brawl. 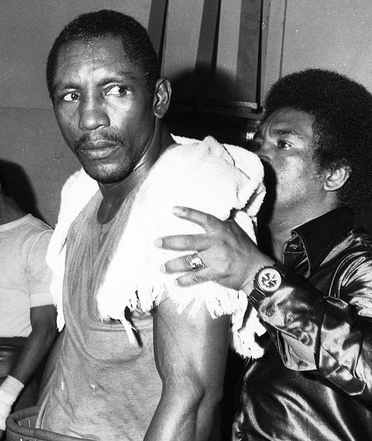 “I never dreamed Kenty would get a title shot before me,” moaned Pryor to the press. He was now taking every opportunity to voice his frustrations to the media, repeatedly calling out the top contenders and champions in the lightweight division. “What do I gotta do,” he asked, “to get a fight at Madison Square Garden or on television?”

Colombia’s Antonio Cervantes was something of a mysterious figure to U.S. boxing fans. Despite the fact he had been a world champion for most of the preceding eight years, had dominated the super-lightweight division, and was a living legend in his native Columbia, his face and name were little known, most of his fights taking place in Venezuela and Panama. Another mystery was his age. He insisted he was 34, but he looked older; it was whispered he was past forty. And while he had won thirteen straight since losing to the gifted Wilfred Benitez back in 1976, he was a decided underdog going into his title defense against Pryor. 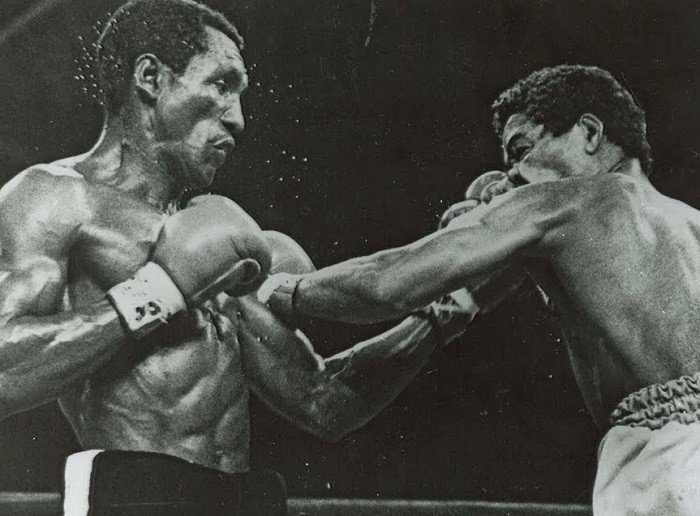 Cervantes had rebounded from a defeat in 1976 to a 17-year-old Wilfred Benitez.

But the real mystery was why he was in Cincinnati in the first place, why he had agreed to do what so many would not: take on Aaron Pryor, in his hometown, no less. But whatever back room deals may have been involved, Pryor finally had a title shot and an appearance on national television. “The Hawk” made the most of it.

As the fighters awaited the opening bell in the ring they presented a study in contrasts. The 24-year-old Pryor couldn’t stand still. Keyed up and ready to fight, he danced about the ring, shadow boxing and flexing his muscles and glaring at Cervantes. Meanwhile the champion sat slumped on his stool like a tired shift worker patiently waiting for the next bus home. A veteran of over a hundred bouts, this was just another day at the office for “Kid Pambele,” his facial expression and body language that of someone ready for a nap, not a world championship fight. Or maybe it was that of a ring-worn veteran, ripe for the taking by a younger, hungrier fighter. 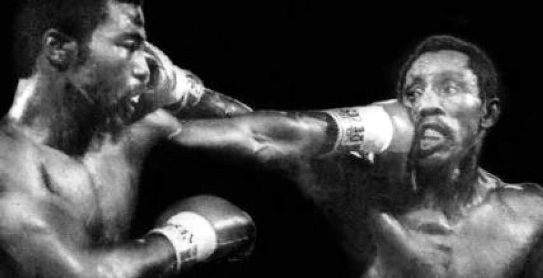 Broadcast live on CBS, Pryor vs Cervantes followed the timeless script of the proud, old king versus the young upstart in search of glory. At the bell, “The Hawk” tore after the champion, chasing him about the ring and unleashing a non-stop barrage of leather. Cervantes appeared briefly perplexed by the challenger’s aggression and the absence of any “feeling out” process but soon enough began to find openings for counter shots. Displaying admirable grace under pressure, he connected with counter left hooks as Pryor, a veritable buzzsaw, kept charging in, though the challenger landed few effective blows. Setting a whirlwind pace, he forced Cervantes into the ropes again and again but then, with seconds left in the round, a short counter hook and a right hand connected and Pryor’s knee briefly touched the canvas. Round one to the champion. 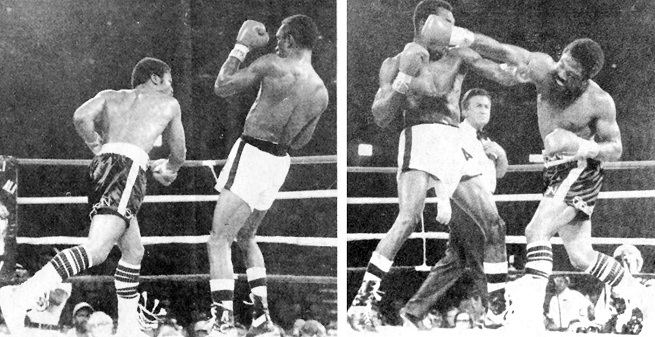 Pryor’s attack was ferocious and unceasing.

The torrid pace continued in the second in what was clearly a contest between youthful exuberance and veteran ring-smarts. Cervantes repeatedly got home with clean punches as Pryor’s brazen attack left him wide open for counters, but it was the champion who appeared hurt near the end of the round, as Pryor landed two hard rights. Returning to his corner at the bell, Cervantes could be seen gulping air, the pace already affecting his stamina.

With his cornermen urging Pryor to “Go get that old man!” the challenger started the third with two more powerful rights as he sought to take full control. Seconds later a series of right hands put Cervantes on the run and opened a deep gash over his right eye, and while the champion continued to score with solid counters, the punches had no effect on the constantly charging Pryor. The sight of his quarry’s blood drove the challenger to attack with even more intensity, his unceasing assault driving a bewildered Cervantes from one side of the ring to the other. His legs already unsteady, the Colombian clinched and held to survive the round. 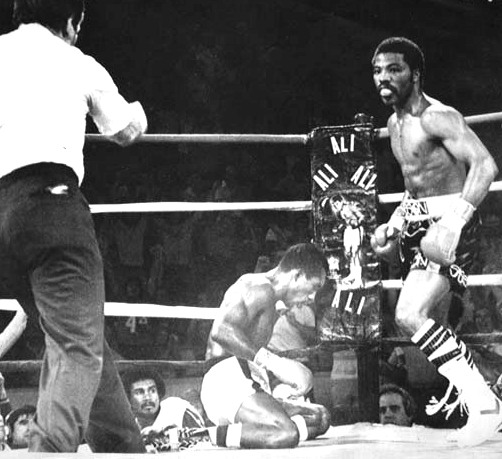 Cervantes down for the count in round four.

To his credit, Cervantes never gave up. Hurt, tired and bleeding, he continued to fight back as Pryor went for the kill in the fourth, but his counter punches, while they kept landing, were like pebbles thrown at a runaway train. Soon enough he found himself trapped again in his own corner as Pryor unloaded another barrage of right hands. The champion, overwhelmed, tried to clinch but “The Hawk” shrugged him off and kept firing until a crushing overhand right landed flush on Cervantes’ chin and dropped him. The old king gallantly tried to rise but could not. The long championship run of “Kid Pambele” had come to a sudden and violent end. 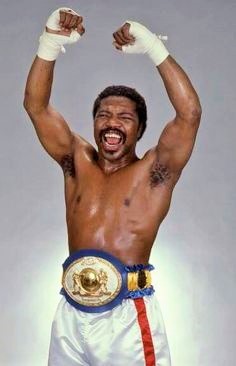 The crowd at the Riverfront Coliseum rejoiced, Cincinnati celebrating its first world champion since the days of Wallace “Bud” Smith and Ezzard Charles. Finally, it was no longer “Aaron Who?” but Aaron the champion, the fighter everyone feared. The new champ would go on to become a major attraction, his title defenses broadcast on national television as he demolished one contender after another with his wild, incessant, tornado fighting style, blasting his way towards a big money showdown with triple-crown champion Alexis Arguello and fistic immortality.    – Michael Carbert