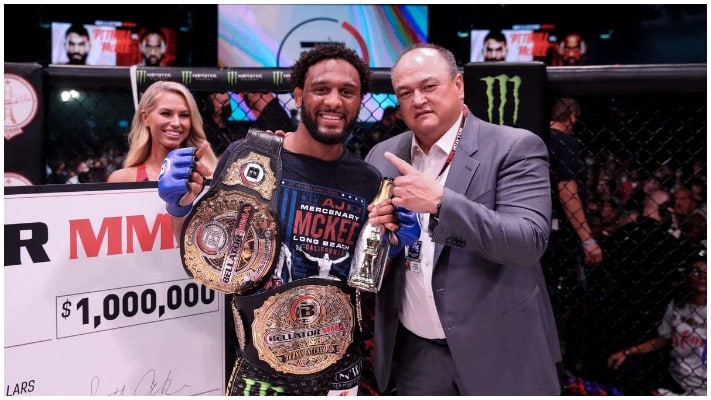 Bellator president, Scott Coker wants to see his featherweight champion square off against elite 145lb fighters from other promotions, primarily those in the UFC.

AJ McKee picked up the featherweight belt and a $1 million bonus cheque when he beat Patricio ‘Pitbull’ Freire inside one round at Bellator 263 this past weekend.

The 26-year-old wobbled the dual-weight Bellator champion with an early head kick before swarming with punches to drop ‘Pitbull’. A brief lapse in concentration allowed Freire to pop back to his feet before McKee locked up a standing guillotine choke to close the show.

Post-fight, McKee declared himself the best featherweight fighter in MMA.

“Being at 145 pounds isn’t the easiest,” McKee said. “Maybe we get some superfights going but I’m pretty much done with the division at 145 pounds, so hop up to 155 pounds. He’s the best 145-pounder – was the best. I’ve pretty much been saying it. Now people are seeing it and believing it. I am the best 145-pounder in the world whether it’s UFC, ONE FC, PFL, I don’t care who it is.

“I’ve got $1 million cash in my bank and I’d put it up against anybody else. I’m sure Showtime and Bellator, they’ll match it. Let’s do some superfights. Let’s get some big stuff going. Let’s change this sport, like I’ve been saying. Let’s do it. Let’s unify these belts.”

Coker is very much interested in matching McKee against the likes of Alexander Volkanovski, Brian Ortega, and Max Holloway but doubts Dana White would be willing to cross-promote.

“Yeah, I mean I would love to see (McKee) fight against other people as well, as you guys would also, but it’s not going to happen because it’s not the UFC’s business model to do it,” Coker said. “But you tell me this kid couldn’t go in there and fight anybody right now. Everybody knows that he can do it. So if they want to get it on, we’d do it in a second.” (Transcribed by BJPENN.com)

Do you think Scott Coker will be able to convince Dana White & the UFC to cross promote on AJ McKee fights?