Dustin Poirier Suggests He Will Retire After Fighting Charles Oliveira 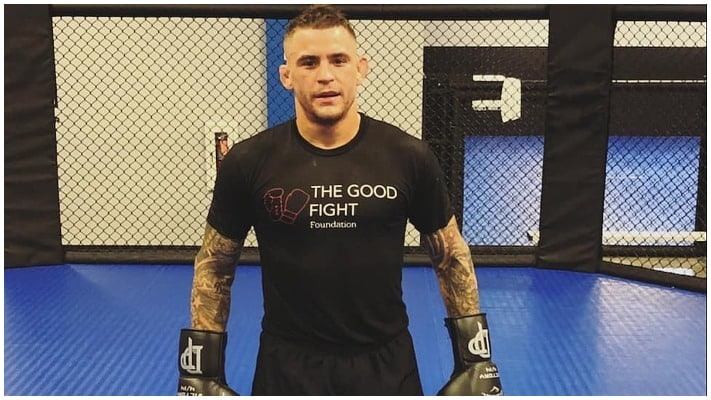 Dustin Poirier has hinted that his upcoming lightweight title fight against Charles Oliveira could well be the last of his career.

‘The Diamond’ has picked up back-to-back wins over Conor McGregor in 2021 to solidify himself as the top contender at 155lbs.

Oliveira won the title recently vacated by Khabib Nurmagomedov when he knocked out Michael Chandler inside two rounds at UFC 262.

A fight between Poirier and ‘Do Bronx’ now seems inevitable.

In an interview with Sportsmail, Poirier gave props to his next opponent who he considers “dangerous” in all facets of MMA.

“Oliveira is a very dangerous guy, I think he’s improving more and more in his striking, putting guys down, he’s long especially for that weight class and I think he’s probably the best jiu-jitsu practitioner in the UFC roster right now,” Poirier said.

“He’s aggressive and very offensive with his jiu-jitsu. He doesn’t just use it to protect himself or get out of bad positions, he attacks people with it and finishes fights with it so he’s a very dangerous opponent who has paid his dues and fought a long time in the UFC.

Poirier is yet to hold an undisputed UFC title. The Lafayette, Louisiana native beat Max Holloway in 2019 to become the interim lightweight champion before he fell short in his bid to unify the division against Nurmagomedov later that year.

The 32-year-old says becoming an undisputed world champion is his ultimate goal and once he’s achieved that there’s nothing left for him to accomplish in the sport.

“For me, being undisputed world champion was the goal from the beginning, if I can tick that box, I’ve done it all in the sport of mixed martial arts,” Poirier said.

Poirier says he might just call it a career and throw himself into his hot sauce business.

Do you think Dustin Poirier is seriously considering retirement ahead of his lightweight title fight against Charles Oliveira?