They called it “World War II,” an odd if not slightly offensive billing, but the logic was undeniable. In 1980, no division in boxing mattered more or inspired greater excitement than the welterweights. It was as if so much talent had assembled itself in the 147 pound weight class that it reached critical mass and exploded in a series of terrific match-ups. Carlos Palomino, Wilfred Benitez, Roberto Duran, Pipino Cuevas, Sugar Ray Leonard, Randy Shields, Thomas Hearns — the depth of the division embarrassed most others. Less than two months before, Leonard and Duran had fought in Montreal, galvanizing the attention of the sports world like no fight had in years. That was “World War I”; the promoters of Thomas “Hit Man” Hearns vs Jose “Pipino” Cuevas were hoping for a similar box-office bonanza. 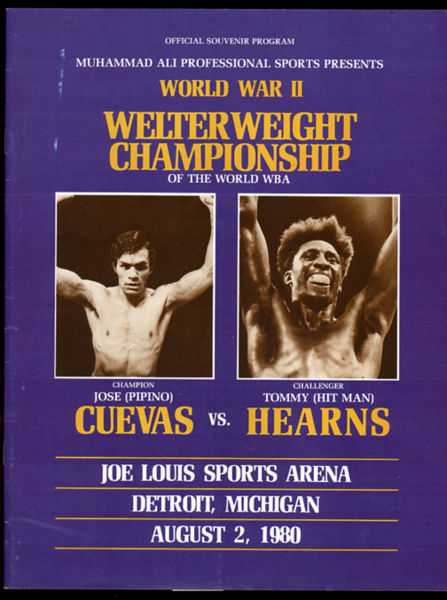 And Hearns vs Cuevas was a big fight, no question, shown on closed-circuit telecast throughout North America, even though the combatants were not as well known to casual sports fans as Duran and Leonard. But within boxing circles, the reputations of these two power punchers loomed just as large. For true fans of the fight game, this match-up was hotly anticipated as they knew this was a tilt destined to not go the distance.

Hearns — young, undefeated, a hero to the people of Detroit, Michigan — had been a highly successful amateur boxer, but unlike Leonard, had failed to make the Olympic team. But many in boxing now viewed him as an even more impressive talent than Sugar Ray. He had chewed up the division, knocking out one contender after another, surprising anyone who had seen him compete as an amateur.

In the past, Hearns had been a careful boxer, using his long arms and nimble feet to stick and move. It was trainer Emanuel Steward of the Kronk Gym who changed Hearns’ style, showing him how to use his freakish 6’1″ height and 78″ reach, comparable to that of a heavyweight, to generate incredible power, especially with the right hand. Steward taught Hearns about a little thing called leverage and once Tommy got the hang of it, his opponents ran for cover and the fans in Detroit started calling him “The Hitman.” 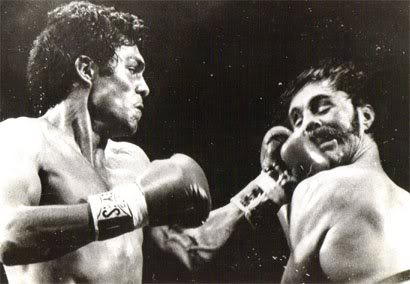 Mexico’s Pipino Cuevas had been WBA welterweight champion for four years, and the mere mention of his name inspired a furrowing of brows. He was not just respected, but legitimately feared. Fighting professionally since he was only fourteen, he had never been knocked down, and had defended his title eleven times, ten by knockout. His punching power was legendary. His left hook didn’t just hurt his opponents or knock them out; it sent them to the hospital. Angel Espada: broken jaw; Billy Backus: fractured orbital bone; Harold Weston: broken jaw and broken ribs. Simply put, Cuevas was one of the most dangerous welterweights who had ever lived.

Now Leonard had lost to Duran, and fans were wondering if another young American talent was about to lose to another fearsome, hard-punching Latino champion. The fight was held in Joe Louis Arena in Detroit in front of a fervent crowd, everyone there to see one of their own make it. No one left disappointed. 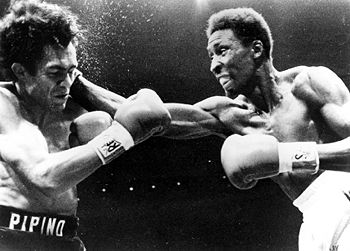 At the opening bell, two gunslingers, men accustomed to dominating opponents with sheer firepower, faced off. They sized each other up for some seconds, Hearns snapping out his sharp left jab, before closing the distance and simultaneously exchanging left hands. Both landed but it was Tommy’s hook which sent Cuevas stumbling across the ring. Hearns didn’t need an invitation; the Motor City Cobra immediately moved in and struck with his awesome right hand. And then struck again. And again. Before the first round was over the previously steel-chinned Cuevas had been staggered four more times by Hearns’ thunderous right. 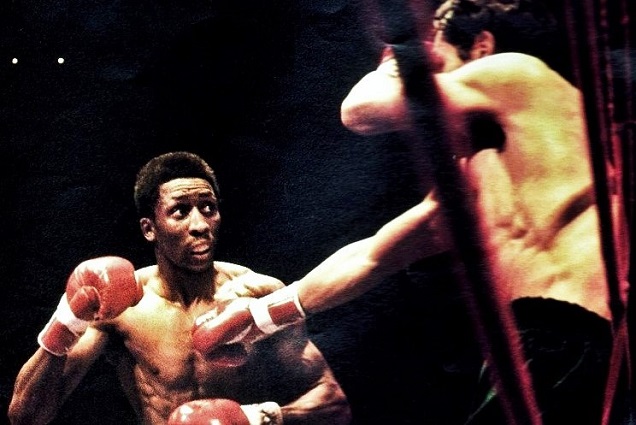 In the second, the challenger picked up where he had left off. His six and eight inch advantages in height and reach, plus his obvious edge in hand speed, made it impossible for Cuevas to get in range and bring his left hook into play. Hearns punched freely, in total command. Finally a devastating right landed perfectly on Pipino’s jaw and turned his legs to spaghetti; the Mexican’s whole body weaved and buckled like a palm tree in a hurricane as he struggled to stay erect. Hearns watched for a moment and then struck home another right and Pipino hit the canvas face first. 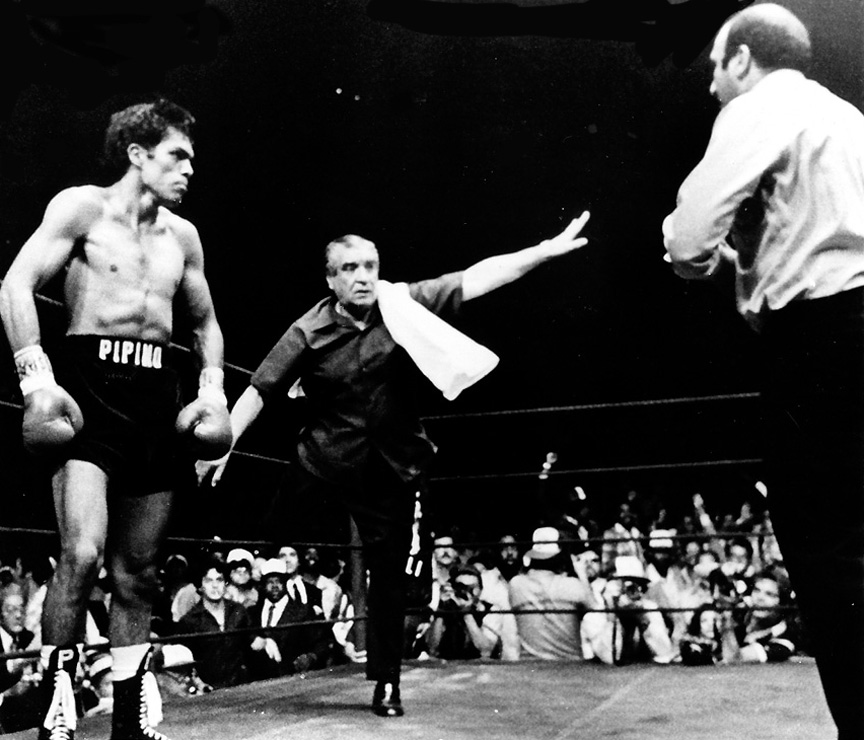 The champion’s trainer stops the fight.

Amazingly, Cuevas beat the count, but his manager had seen enough and stepped through the ropes. Thomas Hearns was the new WBA champion, and the countdown to the inevitable showdown with Sugar Ray Leonard had begun.         — Michael Carbert