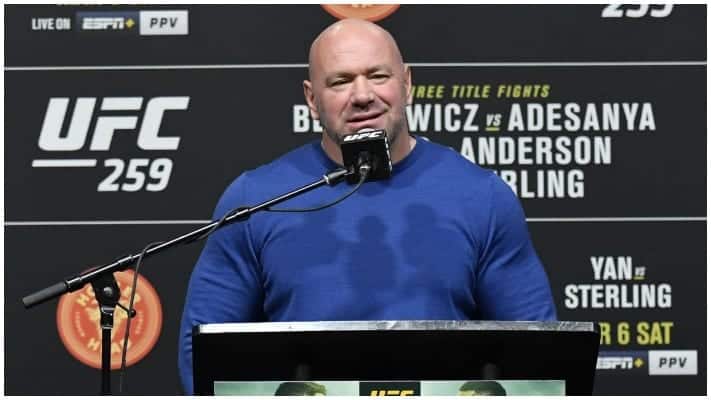 Dana White is hoping that one his former fighters, Vitor Belfort, does the world a favour by knocking out “crackhead” Oscar De La Hoya when they fight.

‘The Phenom’ is set to headline a Triller Fight Club pay-per-view event against De La Hoya on September 11.

It’ll be Belfort’s first fight of any kind since May 2018 and his first boxing match since 2006 – a first-round knockout win over Josemario Neves.

‘Golden Boy’ hasn’t fought since losing to Manny Pacquiao in 2008 but carries a wealth of experience and boxing accolades into the bout.

White and De La Hoya have been feuding for years. The pair often take shots in the media and the UFC president just couldn’t help himself when asked about the upcoming fight between his nemesis and former fighter.

“I’m praying Vitor knocks this crackhead out – and viciously,” White said on “The Pat McAfee Show.” He added, “Viciously knocks him out.”

Despite his hatred for De La Hoya, White acknowledges Belfort has a tough task ahead of him but also says the Brazilian’s power could carry him to victory.

“As much as I can’t stand that dirt bag, De La Hoya is legit,” White said. “Back in the day when me and De La Hoya were cool, I actually was up in his camp. Just his jab could knock people out. De La Hoya in his prime was the real deal. This is a real fight between two real guys. I think that Vitor obviously has the power to KO him, but De La Hoya’s no joke, either.”

White is hoping the Mexican boxing legends drug abuse will catch up with him on September 11.

“Hopefully all the coke sniffing and tequila drinking and whatever other sh*t that guy has been up to has caught up with him,” White said, “and Vitor lays one right on the big mouth of his and knocks him unconscious.” (Transcribed by MMA Junkie)

Do you think Dana White will get his wish? Will Vitor Belfort KO Oscar De La Hoya on September 11?