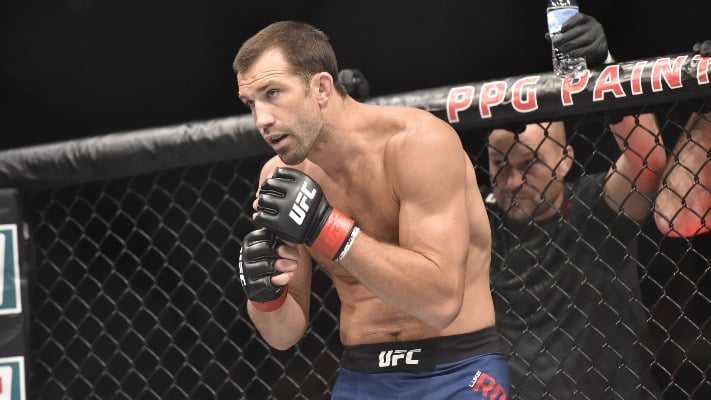 Former UFC middleweight champion Luke Rockhold could make his highly-anticipated return to the octagon sooner rather than later after it was reported that he has been offered a bout with Top-10 middleweight contender Sean Strickland for a later date.

Rockhold has been on the sidelines for a while since announcing his intentions to not only return to the UFC but also to cut weight and return to the division that he once held the belt in.

Rockhold made a brief trip to light heavyweight where he lost against then-top contender Jan Blachowicz at UFC 239, just a couple of fights before Blachowicz became the UFC light heavyweight champion. The 36-year-old Rockhold lost two of his last three middleweight fights, including an all-time upset against short-notice replacement Michael Bisping.

UFC president Dana White has been looking for an opponent for Rockhold for months, and it sounds like he’s found a matchup with Strickland to be his return to the octagon. Nothing has been accepted or agreed upon on Rockhold’s side of things just yet, but that could come soon. White confirmed to TSN’s Aaron Bronsteter that the Rockhold vs. Strickland fight has been offered to both sides just days after Strickland’s unanimous decision win over Uriah Hall at UFC Vegas 33.

Rockhold has talked a lot in recent media interviews about the prospects of a potential fight with UFC middleweight champion Israel Adesanya, saying that he is confident that he could give the reigning champion issues if the two were to cross paths in the octagon.

A win over Strickland would give Rockhold the clout that he would need to make another potential run at the belt, but a lot has changed in the division since he last fought. It is arguably a deeper, more talented division and the race for a shot at Adesanya is more crowded than ever before.

What is your way-too-early prediction for a fight between Luke Rockhold and Sean Strickland?