Dana White Is Not Interested In Working With Jake Paul 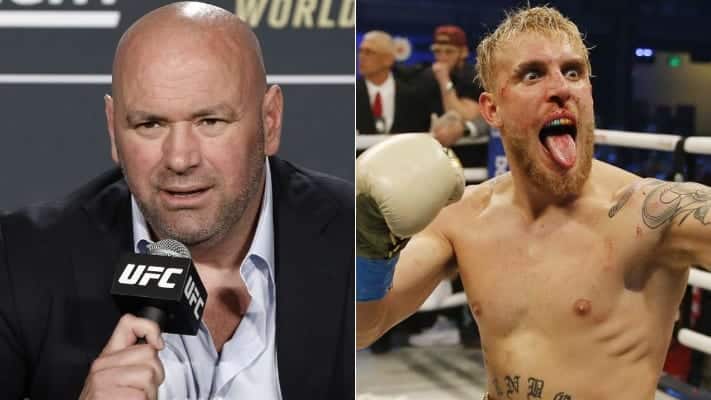 Dana White insists he has no ill will towards Jake Paul but says he will almost certainly never work with the YouTube celebrity turned boxer.

Paul transitioned to boxing in 2020 and has enjoyed some success against extremely low-level opposition. The 24-year-old beat fellow internet celebrity AnEsonGib in his professional debut before knocking out former NBA player, Nate Robinson on the undercard of Mike Tyson vs. Roy Jones Jr.

In his last fight, Paul took what many believed was a step up in opposition when he took on the former Bellator and ONE Championship welterweight titlist, Ben Askren.

‘Funky’ was two years removed from an injury-enforced retirement and is widley regarded as one of the worst strikers in MMA history. Askren got cracked early by Paul and despite beating the count was not allowed to fight on.

Paul is now set to face former UFC champion, Tyron Woodley. The pair will square off live on Showtime pay-per-view on August 29.

During his rise through the combat sports ranks, Paul has consistently taken shots at the UFC president, for what he perceives as mistreatment of fighters.

Despite all the trolling, White insists he has no ill will for Paul but say a relationship between the pair is unlikely as he finds the brash youngster “f*cking annoying”.

“I just don’t see it happening,” White told  The Full Send Podcast, “I don’t hate the kid. Is he fu**ing annoying? Yeah, he’s annoying. He’s trying to make that money. And his shelf life is very fu**ing short.”

“Listen, I never say never,” White added. “But I highly doubt it. It’s just not what I do. There’s a market for that. He could fight a different type of celebrity every week and there’s going to be a segment of the population that wants to pay for that and see it. But that’s not what I do. I put the best against the best.” (Transcribed by Sportskeeda)

Do you want to see Dana White and Jake Paul link up?