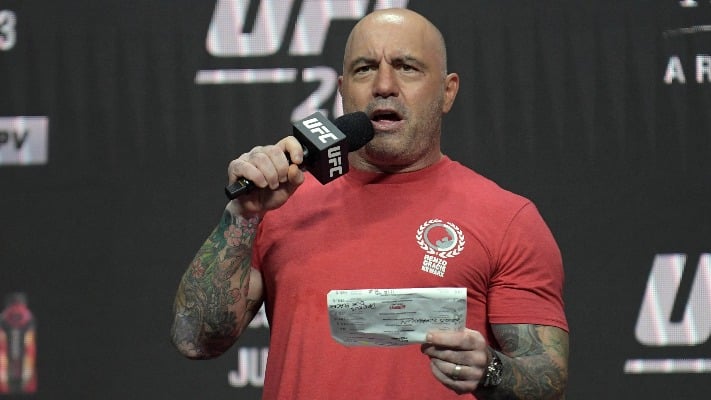 The UFC 265 broadcast team will be without longtime analyst Joe Rogan this weekend as he gets ready for his stand-up comedy tour, meaning that play-by-play man Jon Anik will be joined by former UFC champions Daniel Cormier and Dominick Cruz on the call in Houston, TX.

Rogan joined the UFC broadcast team back at UFC 12 in 1997 and has been a mainstay of the promotion’s skyrocketing media influence ever since. He is largely responsible for bringing energy and charisma to the UFC octagon as the fights play out.

Rogan missing a UFC pay-per-view is not a common occurrence, but he’ll be replaced by two capable personalities in Cruz and Cormier. After a successful UFC career in which he earned titles at light-heavyweight and heavyweight, Cormier has emerged as one of the main voices of MMA and has joined Rogan and Anik on most pay-per-view broadcasts since he retired.

Cruz is a former UFC bantamweight champion who still competes, and defeated Casey Keney earlier this year at UFC 259 by split-decision. He’s still hoping at another shot at the bantamweight title after losing his last shot against then-champion Henry Cejudo at UFC 249.

Rogan will take a rare leave of absence ahead of UFC 265’s interim heavyweight title bout between Derrick Lewis and Ciryl Gane. The winner will face the champion, Francis Ngannou at a later date, potentially at the end of 2021 or early 2022.

Other fights on the card include a bantamweight scrap between Jose Aldo and Pedro Munhoz, along with a pivotal welterweight fight between Vicente Luque and Michael Chiesa.

While UFC 265 in Houston is expected to be an incredible card in front of a sold-out crowd, Rogan not being on the broadcast crew will certainly be an odd experience for fans watching at home. Regardless, the promotion will be in good shape with Cruz and Cormier stepping up.

Will UFC 265 not be as appealing without Joe Rogan on commentary?