What became known as “The Night of the Ramos” happened fifty-one years ago today at the legendary Olympic Auditorium in Los Angeles and for those who witnessed this action-filled brawl, it will never be forgotten. The Mando Ramos vs Sugar Ramos match was set to determine the next challenger to face world lightweight champion Ismael Laguna, who had lifted the title from Mando five months earlier. But the eliminator between Mando and Sugar turned out to be a more than memorable event all on its own. It was a bout that showcased both fighters’ superlative chins in a thrilling, ten round war of attrition.

Mando Ramos was not only exciting and talented but also loose and fast, and we’re not just talking about how he slung leather in the ring. A sensation on the west coast, he had sold out the Olympic in only his ninth pro match, the charismatic Mando liked to fight, liked women, and liked to party, not necessarily in that order. These are appealing characteristics in a celebrity, but they can be detrimental to the development of a young boxer. But Mando, trained by Hall of Famer Jackie McCoy, managed to become the youngest lightweight champion in history despite his excesses outside the ring, and his popularity ensured he commanded huge purses. It is said that only Muhammad Ali made more money as a boxer than Mando in the 1960s. 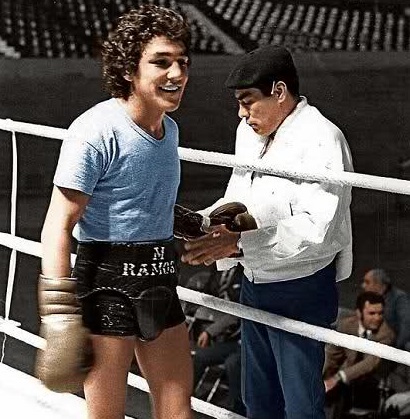 Ultiminio “Sugar” Ramos contrasted sharply with Mando as a no-nonsense Cuban champion who, like his countryman Jose Napoles, fled his country for Mexico after Fidel Castro banned professional boxing. There he fought hard and often, eventually earning a shot at featherweight champion Davey Moore in 1963. He took the title after a brutal war which ended tragically when Sugar decked Moore in round ten and the champion’s neck landed awkwardly on the bottom rope. Moore collapsed after the bout and never regained consciousness. Sugar went on to defend his title three times before losing to Vicente Saldivar and moving up to the lightweight division.

Before the Ramos vs Ramos match, many wondered how well Mando’s facial features would hold up against Sugar Ramos’ sharp punches. Mando had lost the title to Laguna after being badly cut above both eyes, bleeding so profusely that the fight was stopped by his corner in round nine. The other question was if Sugar might be too experienced for the young Mando. The Cuban had over 60 pro fights as well as the acumen of trainer Angelo Dundee in his corner.

At the opening bell, fans pushed aside all pre-fight questions to enjoy an exhibition of heart, determination, and brutality such as only professional boxing can provide. The first round saw both men engaging in sporadic action before finding their rhythm. By the end of that first stanza it was clear this was to be a fluid and fast-paced battle, free of strategic complexity, between two determined fighters with the utmost respect for one another. As early as round two the intensity of the action had transcended all expectations. During the pre-bout introductions the audience had cheered exuberantly for hometown hero Mando and viciously booed Sugar, but now they indiscriminately cheered action for action’s sake. Such is the magic pugilistic mayhem can work. 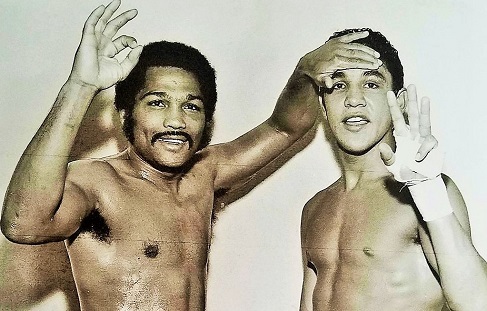 The fight followed a repeating pattern. Mando had Sugar in trouble in practically every round as one or another of his hard right hands found the Cuban’s jaw, forcing him to give ground. But even as Mando followed up with a barrage of heavy blows, Sugar refused to go down, instead coming back with his own wicked shots.

Should the reader ever find himself in the position of having to explain his love for the spectacle of violence that is boxing, he or she could do worse than refer their puzzled questioner to the seventh round of Ramos vs Ramos. As it began, both warriors, to the delight of the crowd, traded punches in ring center until Mando caught his adversary with a crisp left hook-right hand combination and proceeded to bombard Sugar with sharp one-twos. Sugar worked to keep Mando at bay with a hard left jab but as he used zero head movement his chin remained an easy target for Mando’s power shots.

Mando (left) and Sugar at the end of their epic war.

But this wouldn’t be the round to show to the non-boxing fan if it didn’t have an unexpected shift in momentum. Somehow Sugar found the strength to turn the tide and land right hooks and then uppercuts to Mando’s body before getting home a thunderous right cross that appeared to drain the energy out of the younger fighter. Backing to the ropes, “The Wonder Boy” absorbed a terrible pounding. Incredibly, Mando not only survived Sugar’s onslaught but at the end of the round he reversed the momentum once again, connecting with a huge uppercut just before the bell.

And so it went, back and forth, both men giving and taking, even as Mando’s left eyebrow gushed blood, the gore covering half his face; even as Sugar ate jabs and right-hands like he was starving for them; even as both stumbled and leaned against each other, staggering about the ring in a brutal and glorious dance, their weary arms still meting out punishment, those sodden gloves, heavy with sweat and blood, still pummeling each other’s exhausted flesh. 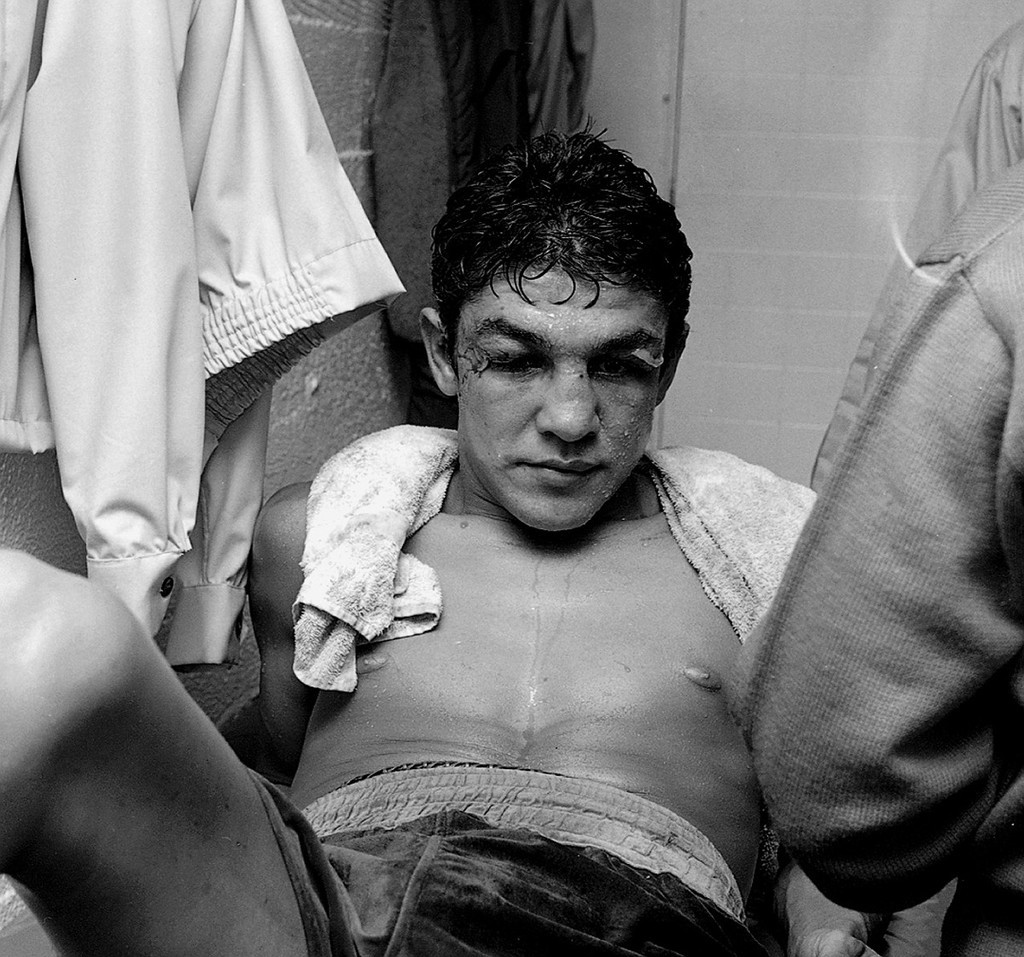 Mando in his dressing room after the fight.

The end result was a split decision for Mando in a match he clearly won. Despite Sugar’s courageous stand, the younger man landed the cleaner blows and remained largely in control of the action. But regardless of the outcome, both game warriors earned a place in boxing history that night, by way of an extraordinary exhibition of courage, determination and sportsmanship. That’s why “The Night of the Ramos” remains worthy of both remembrance and celebration.       –Rafael García