The roar from the Leicester fans as Kelechi Iheanacho smashed home his late penalty was quite something. They – and their players – cared an infinite amount more than anyone else. It was joyous for them, but stale and tedious for the rest of us.

While 30 men in Cape Town went hammer and tongs in a game that represents the very pinnacle of their sport, 22 others wandered around Wembley in a season curtain raiser that has never felt of such little interest. Sky Sports billed the third of three Lions Tests as ‘The Decider’; this was ‘The Trivial’.

The money raised and distributed to community-based initiatives, charities and lower league football teams is what it’s all about, or should be. That’s perhaps never been so important – though even that big plus for this hardship of a football match is always troubling, given the FA were obliged to change its name for failing to specify how much of the money from ticket sales went to charity.

With the Lions and the Test match cricket as competition, you could be forgiven for this being the third of your three screens, if it even made the cut. Its value could not have been in starker contrast to the last game of football many of us will have watched; we’re still not quite over that one. Another week should do it.

Manchester City look as though they could do with a bit longer than that. Sure, you could say they were treating this game with the lack of sh*ts it merits, and the point is of course to get minutes in legs ahead of a Premier League opener against Harry Kane’s Spurs next Sunday. But half of this team could well be playing in that game and they don’t look near ready to do so. Pep Guardiola appeared to care far more than his slovenly team – there was plenty of arm flailing from the technical area. 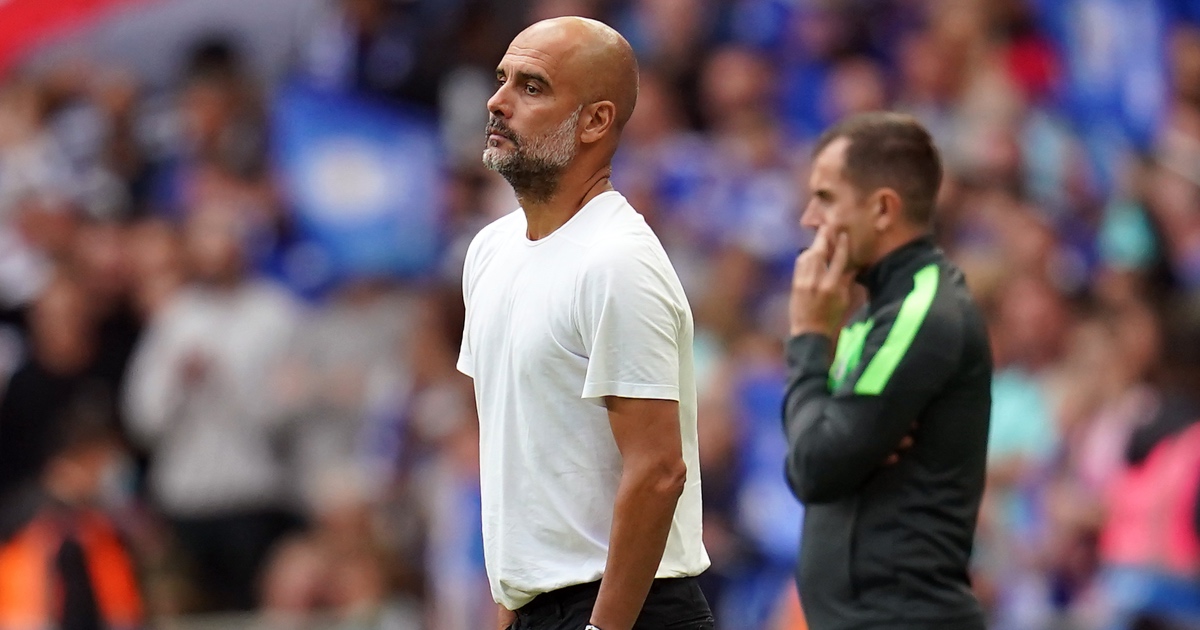 19-year-old Cole Palmer impressed with backheels and dropped shoulders, but moments of quality were otherwise fleeting. His neat touch and pass after a Ricardo Pereira mistake to put Riyad Mahrez through, only for the Algerian to run through sand for 50 yards and blaze the ball miles over the bar, was the perfect example of the academy graduates not getting the support of their more esteemed teammates.

Samuel Edozie too, who looked a tad overawed in the first half, grew into the game and troubled Pereira, one of the finest one-on-one defenders in the league. They were the only City players to come out of this game with any real credit. The passing of the whole team was uncharacteristically sloppy and slow; Ilkay Gundogan and Fernandinho may never have given the ball away more frequently.

It was the careless moments that were the most fun, as Leicester won (or more often, were given) the ball back. One such instance led to Benjamin Mendy going walkabout to leave a gaping space for Pereira to create a chance for Ayoze Perez, who fluffed it. Another saw Harvey Barnes – who was typically direct throughout – pick out Jamie Vardy, whose shot was saved on to the post by Zack Steffen.

Leicester were pretty poor too. James Maddison looked sharp and the immediate looks and passes forward caused City problems at times. But their end product was similarly lacking. And it was another City mistake that saved us from lots of penalties by gifting Kelechi Iheanacho to win it with just one.

Nathan Ake – who was the cause of plenty of Guardiola shrugs and frustration throughout – took a poor first touch, Iheanacho nicked the ball off his toe and was brought down. Ake didn’t play much last season and can’t expect to feature much more after this showing.

It wasn’t great, by which we mean it was rubbish. But it’s another Wembley win for Leicester and those fans enjoyed themselves. Which makes it worth it, probably.