Messi should do a Maradona and join Aston Villa…

Send your thoughts on Lionel Messi or anything else to theeditor@football365.com.

Kane made his own bed
Since England went the distance at Wembley, the only football that’s caught my eye has been in Tokyo (the seven-goal USA-Australia match for women’s gold was a real thriller last night, by the way!). As a result, I hadn’t seen much point in contributing to the ongoing psychobabble by fans overly obsessed with overly dramatized club transfer sagas…until now. Seeing that so many on this esteemed site seem to be having a cow over Kane, there’s a clear need for more uninformed opinions on the matter (you’re welcome):

1. A gentlemen’s agreement between fewer than two gentlemen is not an agreement.

2. An inconsistent and somewhat injury-prone 28-year-old Kane (who has never played for another club) is less valuable a player than, say, Jack Grealish. Or is anyone surprised that the biggest clubs are not exactly tripping over themselves to buy him for nine figures?

3. Only a club with more money than sense would pay even two-thirds of Spurs’ asking price, and Levy knows this. I can hear him now, “You know, Harry, as one of the world’s greatest strikers, you’re easily worth that much. It’s just that the pandemic took away everyone’s buying power.” (shrugs).

5. In case it hasn’t been mentioned before, Harry Kane (presumably as an adult of sound mind) willingly signed a six-year contract, and for a good chunk of change. So why is he acting like a spoiled brat? No one owes him anything (you made your bed, son).
Ebrahim (Can’t wait til the season starts, so we can watch this damn sport instead of wasting hours on wild speculation), MUFC, Seattle

1. Barcelona/Messi: Barca were daft in giving such a massive contract to Messi and overpaying for every player since 2017 in my opinion. Yes he’s one of the greatest players of all time (Cristiano Ronaldo or 1996-1998 Ronaldo for me) but the fact that no one at Barca had the thought of “this doesn’t add up” or “what if our strategy doesn’t work for us financially in the longterm” is one of the worst bits of business management I have heard since the banking crisis, especially since it has left with a squad no one wants to buy and being reliant on the ESL to prop them up.

2. Ronaldo and Messi should make their last career move to a club in the Europa league so they can complete their set of trophies (and the conference league in their second season). So few players have won the full set in relative terms and it feeds into my nerdy loves of stats and trivia.

3. Harry Kane – Levy should sell, regardless of anything else, if he has said he wants to leave. Reinvest, freshen up the squad and get rid of a potentially bad influence. Just don’t be as bad at spending money as they were in 2013.

4. Charlie Kane. Ridiculous office, but if you are getting easy money from your brother, why not?

5. Excited to see Grealish for city. Great player and a menacing city team with all attacking midfielders and rotating false nines will be great value. However, given that Jesus isn’t trusted and there doesn’t like a young striker will be promoted to the first team (from what i have seen), Pep needs a new striker. Lukaku fits the bill I think and looks like 40 million cheaper than Kane and Haaland, at least.

6. The European Super League – read that Juve, Real and Barca are Still interested. Given that two of those three are big spenders and real need a rebuild, I’m not surprised but do not think anyone else will signup for a while.

Thanks
Tom, Leeds fan in Newcastle.

Hands off our Kane
First time writing in, but I felt compelled to respond to Michael, LFC. The mail was fine until he got to the “But” paragraph. There’s a few layers that make this a patently absurd bit of analysis. For one thing, with the new rules maybe Michael should be concerned that Salah won’t hit 6 penalties like he did last season (Kane had 4), but I’m sure honorable Salah and Mane never go down under soft contact. That’s surely just a Harry Kane maneuver.

The other thing that’s pretty silly here is the idea that this rule change will somehow lower Kane’s standing. I don’t know what it is about the future Sir Harry but it seems like no one can just appreciate that he’s good. He’s not reliant on free kicks and pens for his production. He’s an all-around forward who understands how to draw fouls to pressure a defense or take pressure off of his own. Does Michael think that Kane won’t adjust to the new rules? Will the new rules somehow prevent Kane from playing a perfect skimming switched ball to a fullback or from getting shots off? If not then I think he’s still clearly the best striker in the division (at least). Kane’s ability to draw fouls is just a bonus on top of his many other talents. The man led the league in assists and goals last year. If you need a reason for City to hesitate to buy him, how about his age or his history of lower leg injuries? No need to contort yourself.

But since I’m Spurs through and through, hopefully Pep follows Michael’s advice. Hands off our Kane.
– (Not) Harry (Kane), Los Angeles, THFC 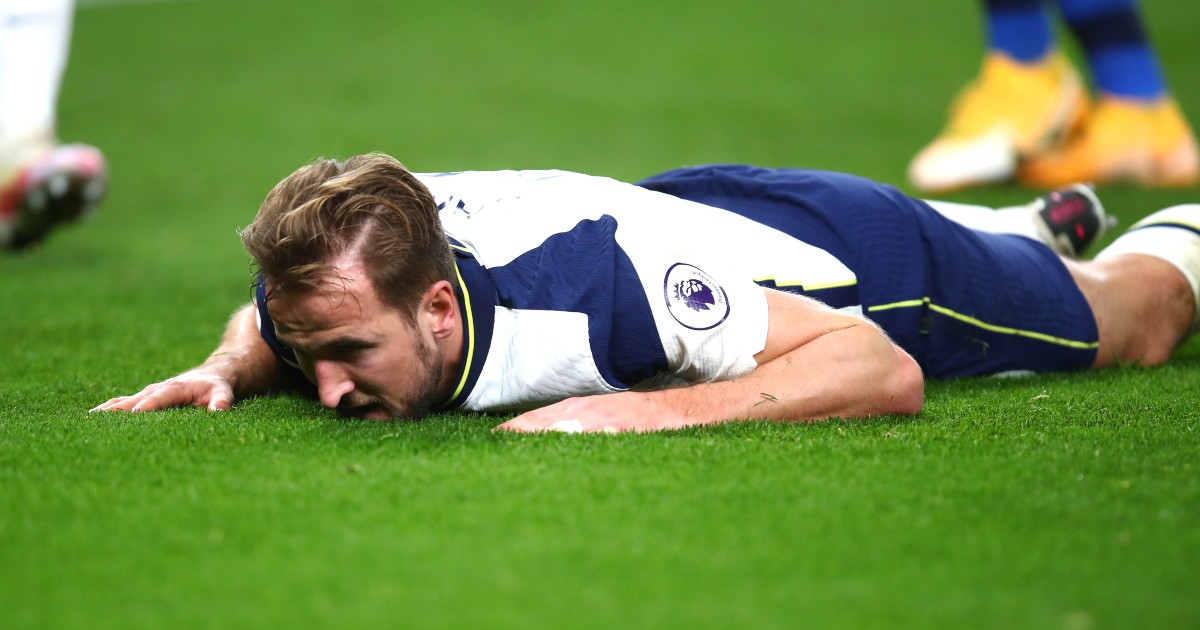 Messi ‘quitting’
Is Calum, Scotland on crack?? Messi isn’t “quitting” anywhere. His contract ran out on July 1st 2021. He then agreed a new contract, while a free agent. Both he and the club decided that it was decent deal for both parties, however La Liga blocked it. The same La Liga who are refusing to allow Aguero and Eric Garcia to register for the new season. Messi made Barcelona a lot more money than they have ever paid him, he brought them to footballing heights they’d never have been without him, from CL winners under Pep, to third last season, when they would have been lower mid table without him. He owes Barcelona nothing. Hopefully he stays in Europe so we can watch him for another few years, possibly the Premier League, where he has the same amount of goals against the top 6 already, as the over-rated Harry Kane.
Weldoninhio, Dublin

Barca beyond their means
The idea that Messi is the cause of Barca’s problems is totally bogus. Barca have consistently overpaid to bring in players and put themselves at financial risk over and over again. They have brought in new players before being able to offload existing players. They have been greedy and lived beyond their means. They had a once in a lifetime player but that wasn’t sufficient.

Sure, La Liga may cave, but that doesn’t make the problem go away, it just extends it until they can find some kind of ‘Hail Mary’ financial solution. Clearly the Super League was supposed to be just that. Not surprising that the three teams hanging on to it are the ones in the most desperate financial need. It’s good that the courts may decide that UEFA (and hopefully) FIFA don’t have exclusive rights over club competitions, but it isn’t going to change the current financial scenario except exempt them from the fines meted out by UEFA which were pretty paltry.

The club knew this was coming for several years but we’re still talking about getting Neymar back. Really. They offloaded Suarez while they still had Coutinho et al, which backfired.

It’s no coincidence that the once well run club has run into serious issues once people like Ferrando Soriano went to City.
Paul McDevitt

Messi to Villa
Let’s get real about the Messi situation. He must be fed up of the comparisons to Maradona. So there’s a simple solution. Hopefully he reads this and sees the brilliance and simplicity of the idea.

The season before Maradona joined Napoli they finished 11th. So he now needs to join the 11th best team in England and win the league with them to prove his greatness.

On the plus side Villa do have £100m in the bank I hear.
Minty, LFC

Messi to Al Saad
even if Callum’s take on what is going on in Barca was accurate , I would still take issue with comparisons with what Bogarde did, and what Umtiti is currently planning to do at Barca …..

You know you’re not going to contribute, won’t get a squad number, will probably rot in the reserves , and yet you won’t shift , wasting the rest of your career personally there is nothing worse, …and you honestly want to compare it to the guy who has largely been carrying a team to Leagues and Cups for at least the last 3 years….

while we are it, can we please stop calculating how much, players are making and saying it’s enough ,to live on for the the rest of their lives, really it isn’t , there’s the player and His family’s  lifestyles , the extra responsibilities he takes on because everyone assumes he’s rich , poor investments ,which are more likely ,when you’ve thought more about sports than business management etc,  go broke in a decade…..

As an aside the recent announcement of Al Saad proposal sounds wonderful especially if they loan him immediately to Barca for a year( while paying his wages )  … just think he rounds off his time in Barca ,has a farewell year ,hands the Baton to Pedri and Ruig etc ,one more crack at all the trophies says a proper goodbye to the fans…

Messi conspiracy
What if the Messi saga is the same as that weird Griezmann ‘I’m staying’ video to eventually go kinda thing. Like, what if this is La Liga’s strategy to get more exposure?
Calvino (Maybe?)

‘Guest tickets’
Ad propos my letter this morning, I still haven’t received my season ticket for the match on Sunday week, my payment was confirmed in the first week of June.

Interestingly I have had an email today, telling me there are ‘guest tickets’ available. For the opening day of the season, at home to the reigning champions!!  Really??

I’d be worried if my name was Daniel Levy.