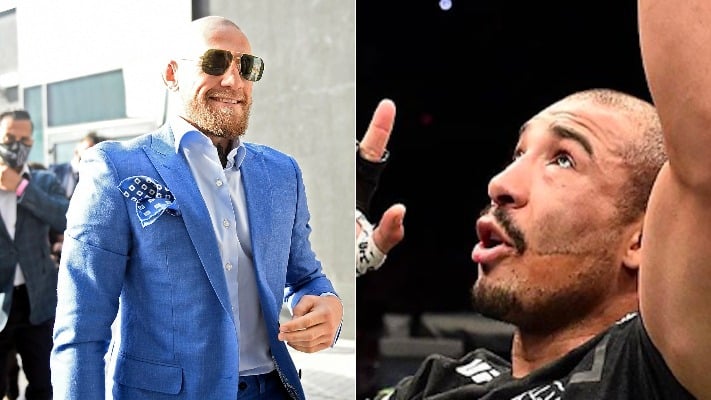 Conor McGregor has given his reaction to Jose Aldo‘s recent victory.

Aldo shared the Octagon with Pedro Munhoz in the co-main event of UFC 265. This was Aldo’s second bout since being stopped by Petr Yan for the vacant UFC Bantamweight Championship back in July 2020. First, Aldo earned a unanimous decision victory over Marlon Vera. He has now followed that up with another unanimous decision win, this time over Munhoz.

After the fight, McGregor reacted to Aldo’s moment of triumph on Twitter.

“Jose Aldo is a real legend.”

There is a storied history between McGregor and Aldo. The “Notorious” one challenged Aldo for the UFC Featherweight Title back in December 2015. Up until that point, nobody had beaten Aldo under the UFC banner. McGregor turned the world of MMA on its head when he knocked out Aldo in just 13 seconds.

The buildup to Aldo vs. McGregor was heated but the two have exchanged pleasantries since that fight took place. McGregor praised Aldo for his 2018 TKO win over Jeremy Stephens when speaking to Adam Glyn.

“I’m so happy for him. Honestly, truly happy to see the joy he had after it. It’s a crazy business and I know he’s gone through a lot of stuff, so to see him come back with that great finish I was very happy for him and his coach, Andre Pederneiras. The whole of Ireland was happy for Jose Aldo that night.”

Jose Aldo also showed his appreciation to Conor McGregor for defending his move down to bantamweight. Here’s what he told TSN’s Aaron Bronsteter at the time.

“Of course I took it to heart, the great champions know what it takes to sacrifice things for us to achieve things, the other people, the other fighters only dream of so it means a lot to me that it comes from him. He’s a champion of two weight classes. He knows the sacrifices that I had to make and I really take the compliment, the comment to heart.”