Francis Ngannou vs. Ciryl Gane Is A Badass Fight 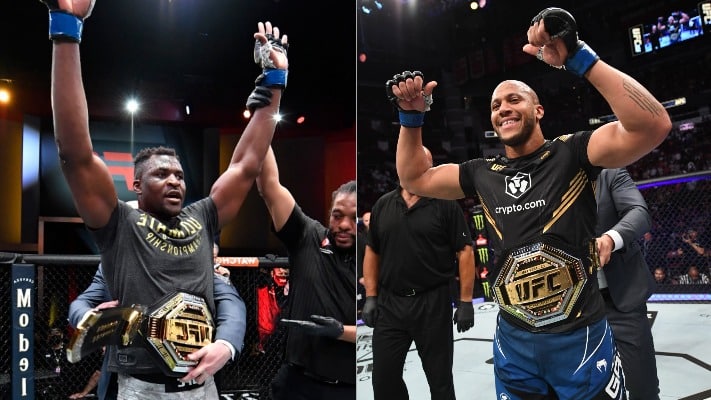 Francis Ngannou is the UFC Heavyweight Champion. “The Predator” wasn’t ready to compete at UFC 265 so the UFC decided to book an interim title fight between Gane and Derrick Lewis. Despite being in enemy territory, Gane dismantled “The Black Beast.” It was the leg kicks and movement of Gane that gave Lewis problems. In the third round, the damage was too great for Lewis to handle and he lost the fight via TKO.

During the UFC 265 post-fight press conference, White praised Gane for his performance and expressed his excitement for the interim heavyweight title fight.

“Ciryl Gane was too much for him. Ciryl Gane moves like a middleweight. His footwork is unbelievable, this guy stays on his toes the whole time, stays on the outside, and picks you apart. He is a very talented fighter. His fight IQ is through the roof. This guy’s the real deal. Him and Francis is a badass heavyweight fight.”

White was then asked about Jon Jones potentially being in the mix. Here’s what the UFC boss had to say.

Ngannou’s last bout took place back in March. That was when he captured the UFC Heavyweight Title by knocking out Stipe Miocic in the second round. Ngannou is riding a five-fight winning streak. He’s scored a knockout or TKO finish in all of those fights.

As for Gane, he is a perfect 10-0 in his pro MMA career up to this point. Four of those wins have come by way of TKO and he’s also sealed three submission finishes. Gane started his pro MMA career just three years ago in Aug. 2018. In a short amount of time, he could be recognized as the undisputed heavyweight king.