Jose Aldo Hopeful Of Fighting TJ Dillashaw Next In December 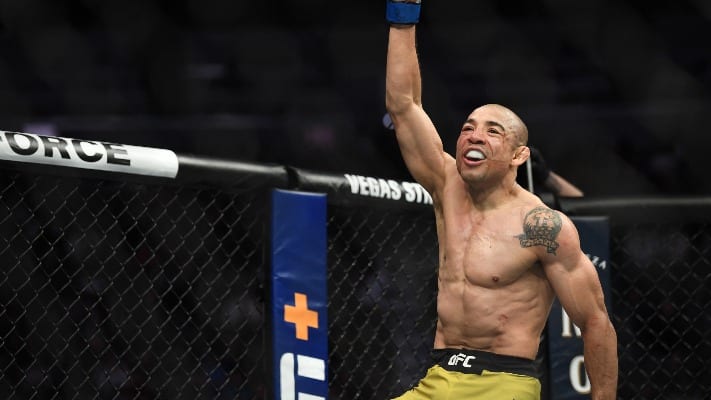 Aldo made it two wins in a row after outpointing Pedro Munhoz over three rounds in their bantamweight encounter at UFC 265 last night.

While the Brazilian still hopes to become a two-weight champion, another title shot doesn’t seem likely as of yet. That’s because Aldo only lost to Petr Yan in their vacant bantamweight title fight last year.

And with Yan expected to challenge current champion Aljamain Sterling in a rematch later this year, Aldo will have to remain active and continue racking up a few more wins.

Dillashaw is certainly one name that interests the former featherweight king and he is expecting that fight to take place before the end of the year.

“It would be great for me to fight with Dillashaw,” Aldo said at the post-fight press conference (via Middle Easy). “Hopefully by December. I think it would be a great fight and that’s what we expect. That’s what I’m expecting right now.”

Dillashaw only returned to action last month when he defeated Cory Sandhagen via split decision in a five-round war. And although he suffered many injuries in that fight and required surgery, Dillashaw wasn’t expecting a long layoff.

“Went in for a mri today, found out that I suffered a displaced Bucket Handle tear of the Lateral Meniscus and a Lateral Collateral Ligament (LCL) rupture at the end of the first round landing ground and pound while being lazy in a compromised position,” Dillashaw said last month. “The good news is that these tears are repairable and will have a very speedy recovery. Going in for surgery in the next couple days.

“Loved being in the cage even though I had to push through some adversities to grit out the win. Thank you for the support, it’s belt season now.”

With Dillashaw also likely having to wait for a title shot, a fight with Aldo certainly makes sense in the meantime.