£20m for Joe Willock? Arsenal are ‘run by idiots’…

Send your thoughts on Joe Willock, Arsenal or anything else to theeditor@football365.com…

Arsenal are ‘run by idiots’…
Price of staying in the Premier League? £170m. Price of a young English talent? £30-£40m. Price of Joe Willock, who scored the goals to keep Newcastle in the league and was developed by Arsenal? £20m.

Our club is run by idiots.
Graham Simons, Gooner, (Wake me up when Arteta, Edu and the Kroenkes are gone), Norf London

Falling back in love with football
I hope your readers don’t mind me sharing.

Recently I have been falling out of love with football. I don’t think it was for any particular reason.

I don’t hate the money involved, I don’t think it was the lack of fans I just think it was one of those things. My late father was a football fan till his late 30s then he ‘fell out of love’ with football.

I have followed in my dad’s footsteps and I have rode motorcycles for over 20 years, recently I have found myself looking forward to MotoGP and world Superbikes more that any football match.

I took my son to see Liverpool’s friendly with Bilbao, his first live game.

The way his eyes lit up as he walked up the steps and saw the pitch and the fans for the 1st time.

His excitement at seeing Van Dijk, Salah and Allison.

The way he grabbed me in celebration as Jota scored.

His disappointment at Bilbaos equaliser.

The passion in my 8 year olds voice as he joined in Anfield renditions of ‘He’s Virgil Van Dijk’ ‘Mo Salah, the Egyptian King’ and other chants.

It was like my footballing battery was low and needed a jump start, my son gave me that

I now can not wait for the start of the new season!
Graham, LFC

Coventry City
With the Premier League kick off looming large, I just wanted to sneak in and say how satisfying it was to see my mighty Sky Blues finally return home yesterday, with the second half performance in particular against Forest lived up to the given billing and importance highlighted by the Sky tv cameras. The JPT win and couple of promotions from league 2 and league 1 have been late highlights of an otherwise dour couple of decades for Coventry fans that have seen massive financial incompetence, points deductions, and two bouts of homelessness, with Coventry forced to play for periods at both Northampton and Birmingham.

Whilst the off-field issues haven’t disappeared, we do at least have some stability, and a long term agreement with stadium owners Wasps that should guarantee these housing issues do not resurface in the coming years. With a limited budget, Mark Robins has done a fantastic job of getting us to play some fluid counter-attacking football that is as good as anything Coventry fans have had to watch for a long time. Whilst we do still lack a killer edge, the fans certainly deserved a little luck yesterday, with a not-undeserved 96th minute winner capping off a good second half for the fans who were noisy throughout, even when we went one-nil down.

Here’s hoping we can kick off and consolidate our place in the Championship as a building block for the future (or happy to end the season now for COVID and take the table as it is?)
Reece (PUSB!) – Qatar

If thats the case then do we need to question the merits of Totti, Scholes, Giggs, Maldini, Del Piero, Gerrard, Le Tissier etc?

Or does the criticisms only count when its a player you have no vested interest in
Paul, Manchester

I felt the need to write into the mailbox to clear up a misconception which seems to have shown itself this morning.People are claiming Messi and his legacy will be tainted for leaving Barcelona over wage demands or  monetary reasons. From my understanding this is not the case. Even if he decided to play for free, as some have proposed, he still would not be able to stay on as a player and I’ll try to explain why.

From my understanding La Liga has implemented a wage cap meaning a club cannot pay in excess of 70% of their total revenue on player wages. From what I have read Barcelona are currently sitting somewhere between 105-115%. Until this is reduced they cannot register any new players. Messi’s contract expired in June I believe, meaning to renew this he would fall under the category of new player registration (even though he has been there  something like 21 years)

So even if he decided to play for free (which personally I think would be ridiculous when you read how much some of the other payers are on) he still would not be able to register for the coming season until Barcelona drop around 40% of their current wage bill, which is just not going to happen in such a short time. From reports Messi even agreed to cut his wages by 50% in order to remain but as we have all seen this still wasn’t enough for Bareclona to keep the player.

I never thought I would feel so much empathy for a millionaire footballer but watching the press conference yesterday I couldn’t help but feel emotional (and to be clear I have never liked Barcelona). This is arguably the greatest player of a generation (although again I’m more of a Ronald man myself) who gave everything for this club, he deserved a send off from a packed Nou Camp, a hundred thousand people chanting his name. But instead he stood in a room with barely enough people to fill a double decker bus. It just didn’t feel right.
Barry (PSG should just go balls out and sign Ronaldo too) Dublin

When you’re the best in the world at what you do, why would you ever do it for free? Nor should he have to….would you?
Jon (nothing witty, just needs saying), Lincoln 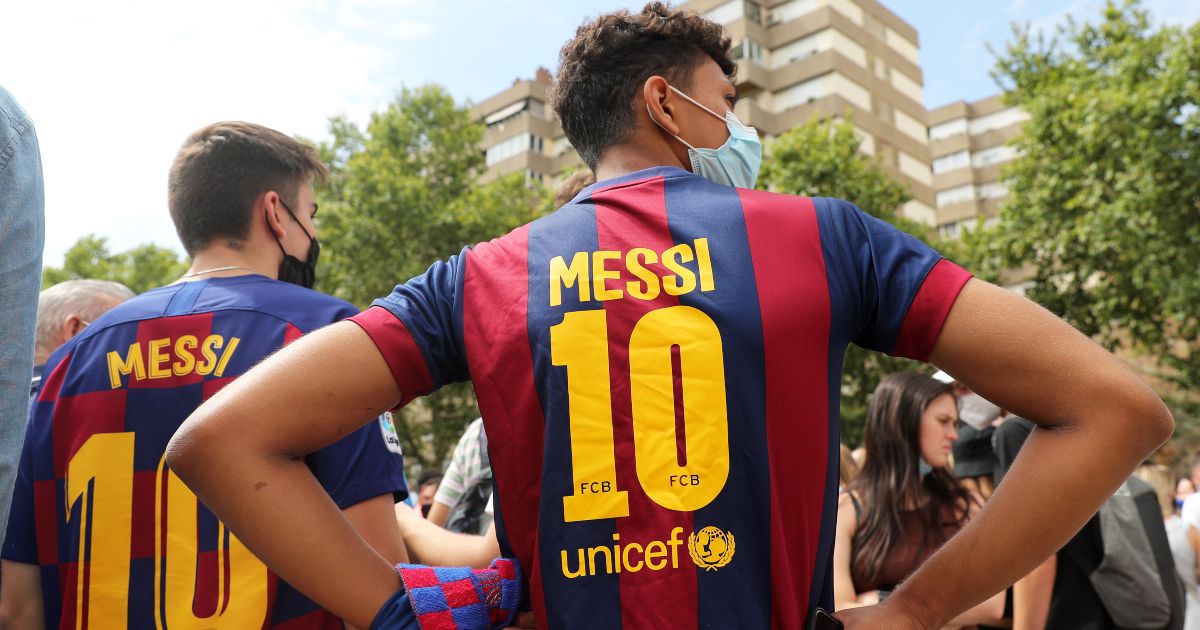 Just been reading mailbox contributions on Messi saying he should play for nothing.

Even if he did, there are still employers contributions to pensions, tax, healthcare etc. Plus insurance, insuring messi isn’t cheap. The insurance company will insist on certain things like security maybe. So it wouldn’t be nothing and I’m sure at least some of those expenses count in the salary cap.

If hes contracted to barcelona for zero, is that even legal? Food at the training ground would be deemed a taxable benefit and all the other tosh.

Sponsors would want their pound of flesh. How would that work?

Wouldn’t it create animosity in the dressing room? It’s hard enough with all those wildly differing salaries but with a charity case as well.

How would the rest of the league react to that flagrant attempt to circumnavigate the wage cap rules?

Obviously the spanish tax authorities wouldn’t be interested in all these crafty tricks, lionel has never been in trouble with…. oh wait.
Rob, Gravesend

Harry de Cosemo’s article about Messi and Barcelona is a sad one but the truth is often terrible.That we may in our lifetime never get to see a great player like Messi remain in the same club for so long.

That a new era where loyalty,trust, respect and purity of the game have withered and all that is left in the game is financial crisis and Paul pogba’s instagram posts.
Jamo(no one wants Messi to leave…not even PSG) Nairobi,Kenya.

Messi/Ronaldo fan boys
There is truly nothing more tedious than Messi and Ronaldo fanboys going at it like 90s teenage girls arguing over Gary or Robbie. Both sides equally entrenched in their opinions, with zero self awareness that literally nothing either player could do could ever change their minds.

Messi doesn’t need the Premier League
If I had a pound for everytime I hear “Messi needs to prove himself in the EPL”, I would be a millionaire by now.

Who told you all a player needs to play in the EPL before his “quality” can be deemed worthy? I have heard this rubbish since my early days of watching football but it has since become a norm in football conversations now and people are starting to think it holds water.

IT IS TOTAL RUBBISH!

Messi or any other player for that matter doesn’t need the EPL to prove their genius. We have had great players who never set foot in the EPL. Some of them prominently feature in discussions about Greatest Players Of ALL Time.

Yes, the EPL is a good league with good players but to assume other leagues are not worthy is utter rubbish. Get yourself educated.
Nelson (What the hell is a farmer’s league? A league where only farmer’s play?…Rubbish!) Lagos.

Tragedy
It’s tragic that Messi is leaving. And it’s especially tragic that once his departure was announced literally only two teams were linked with him – those with oil money injected into the club. I worry what the landscape will look like in ten years. How often it will be a City vs PSG final in the champions league?

To those who say Messi has or hasn’t been a drain on Barcelona financially – how exactly do you know this?? Have you studied their accounts?

While it’s clear the club has been mismanaged in many other ways especially poor expensive signings in the past few years, unless you look at the accounts you don’t actually know if the club made more money through all those things than they paid out.

So stop writing conjecture based on having access to none of the facts please.
Nishul Saperia (FFP has failed)