Khamzat Chimaev Plays Down Rivalry With Khabib Nurmagomedov: I Love Him 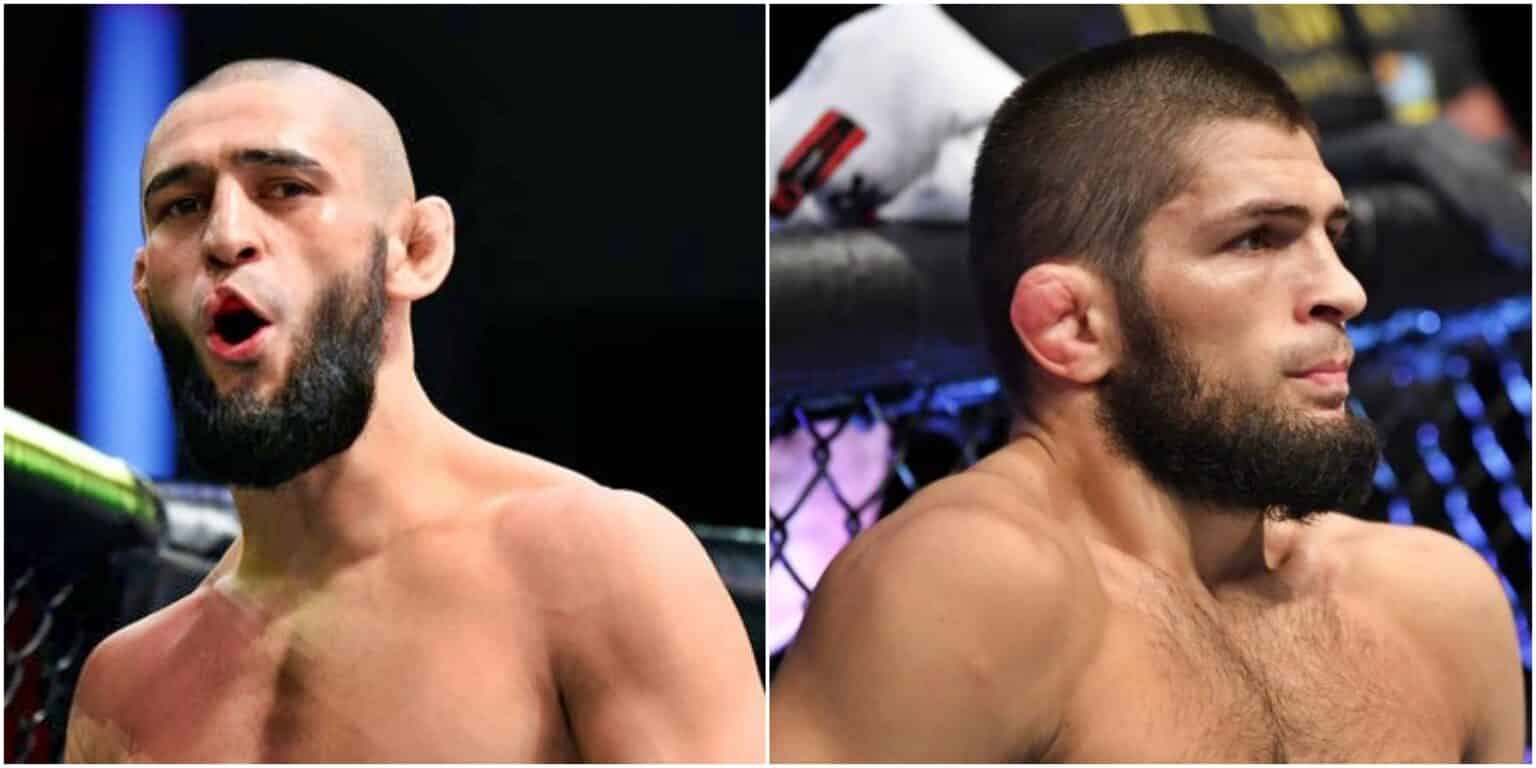 Ahead of his upcoming Octagon comeback in October, undefeated uber-prospect, Khamzat Chimaev has squashed any rumours of a potential rivalry with former undisputed lightweight champion, Khabib Nurmagomedov claiming that he “loves” the undefeated sambo specialist, and how he has looked up to him during his career.

Forced from a trio of attempted pairings with streaking welterweight contender, the #3 rated, Leon Edwards, Chimaev was left with lingering health issues amid a battle with the novel coronavirus in December of last year.

Slated to return to active competition for the first time since September of last year, the AllStars MMA mainstay is booked to meet with the heavy-handed, Li Jingliang on ‘Fight Island’ in Abu Dhabi, UAE as part of the main card of UFC 267.

Suggestions of a rivalry with the retired Khabib arose when Chimaev claimed during an Instagram live Q&A session, that he would “smash” then-undefeated former lightweight kingpin — before it emerged a couple of weeks later that Chimaev had parted ways with Dominance MMA and Ali Abdelaziz — the same outfit which represents Khabib.

Clearing up any sort of confusion regarding a possible issue between the two, Chimaev explained that he looks up to the Dagestan native to this day.

“This guy (Khabib Nurmagomedov), we looked up to him (in the) beginning and now still look up to him,” Chimaev explained during a recent interview with FrontKick.online. “He (Khabib) [became] a champion, he’s one of the best fighters in the world. And people think I hate him. I love him because he’s Muslim. I’m Muslim. He come from some village like me, same country, same small Republic, like Chechnya, Dagestan. It’s the same. I have a lot of brothers from Dagestan. He’s Muslim, I’m Muslim, we’re brothers.“

“I answered to bullsh*t guy (during the Q&A), but nobody knows him,” Chimaev said. “It’s my [mistake) because I answer for him. He said like, ‘Khabib gonna smash you…’ If somebody say (sic) to you, ‘He gonna smash you,’ of course I’m gonna answer it like, ‘No, nobody gonna smash me. I’m gonna smash everybody. If you a (sic) real man, you have to think like that.” (H/T MMA News)

A three-fight veteran under the UFC’s banner, former Brave CF standout, Chimaev debuted on ‘Fight Island’ in July of last year where he stopped John Philips with a second round kimura finish.

Just 10-days later, in record setting fashion, Chimaev stopped the debuting, Rhys McKee with ground-strikes in the opening frame of their welterweight clash.

Appearing on the main card of UFC Vegas 11 back in September in his most recent outing, it took Chimaev just 17-seconds to stop Roufusport grappler, Gerald Meerschaert — dropping the submission artist with a one-punch stoppage.