At no point during his press conference at the Nou Camp did this seem like an end Lionel Messi expected or wanted. Barcelona deserve this.

There were tears, applause and a sense of something untoward. Family, friends, teammates, board members and journalists crammed into a small room at Camp Nou to watch Lionel Messi stumble on his words, sacrificing his eloquence to keep his emotions in check. He’d planned out what he was going to say but the reality of why he was there hit him hard and so he lost himself. Messi was stood at a podium, suited to the max, announcing his departure from FC Barcelona.

The dust hadn’t settled since the club released a statement on Thursday night and it still hasn’t now. It says everything about Messi and his relationship with Barcelona that even them confirming his exit was taken with a pinch of salt. Everyone was waiting for the catch; Twitter even captioned the trending topic by saying Messi was leaving ‘according to’ a Barcelona statement, rather than suggesting they had said it as fact.

There were murmurings that the club were using Messi’s situation as leverage against La Liga’s new cash injection thanks to CVC Capital Partners, which they and Real Madrid fear would potentially disrupt their regular duopoly in Spain. Gradually the realisation dawned. After all the speculation over his future last summer, this time he was leaving the only club of his professional career behind. The key difference was, he no longer wanted to.

If anybody believed that elite football clubs are beyond the reach of financial crisis – an easy opinion to formulate owing to mass evidence over recent years – the case of Barcelona is emphatic proof to the contrary. Their debt has risen to over £1billion, to the point where they were being told by the league that no new signings, including Memphis Depay and Sergio Agüero, Messi’s best friend signed as a way to entice him to renew his contract, which he had agreed to do, could be registered. It isn’t just that Agüero won’t get to fulfil his dream of teaming up with Messi at club level, but rather that he won’t get to play at all as things stand.

Until around Thursday afternoon, everyone, including Messi himself, believed that renewal was all but a formality. That was why the press conference wasn’t just a poignant occasion, remembering his 672 goals and 35 trophies since making his debut in 2004. It was an eerily numb one, too. This was a situation nobody wanted; there was a stunned silence in the room, palpable even through a television screen as millions watched across the world, but you couldn’t shake the feeling that Messi, despite refusing to blame anybody in particular for what had happened, felt more could have been done. 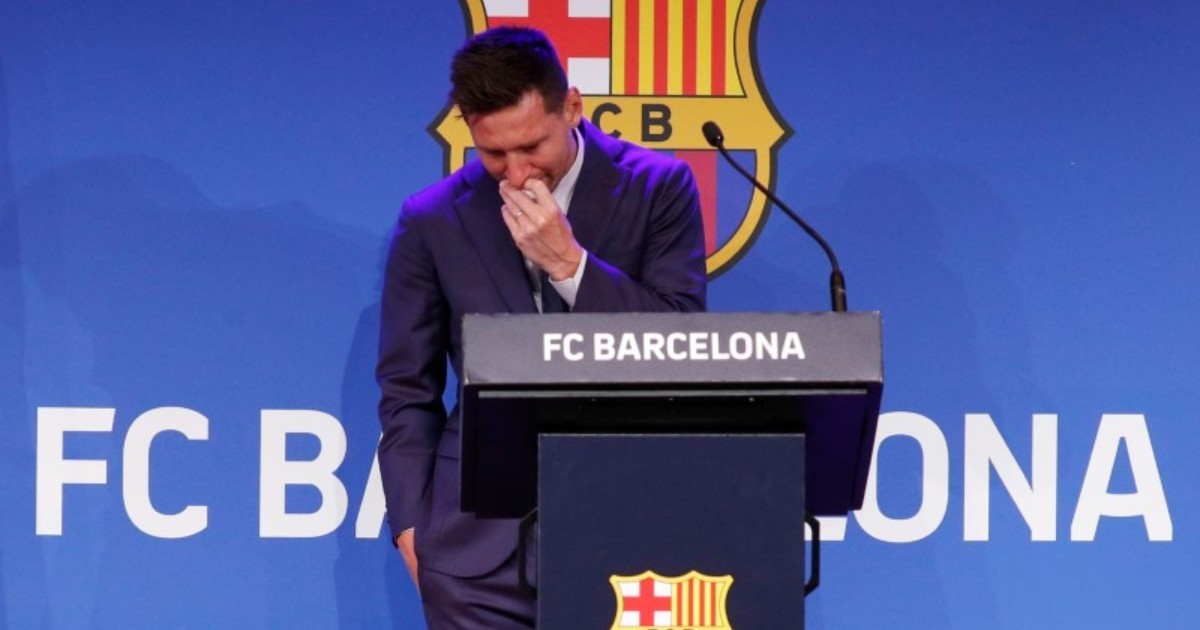 Joan Laporta, Barcelona’s president currently in his second term having witnessed the birth of Messi’s career and the club’s most successful era in his first, watched on. He’d already said every avenue had been explored in his own press briefing last week.

It isn’t the story here, but Messi’s personal turnaround over the past 12 months has been something to behold. He’d pushed to leave after finally growing tired of Barcelona’s wavering competitiveness, internal politics and blend of arrogant and ignorant mismanagement at almost every level. That was supposed to be the watershed moment, but the threat of legal action defused the situation and as Laporta replaced Josep Maria Bartomeu, the main villain in the story which has led to Messi’s eventual departure, relations began to heal. By the time his contract ran out at the end of June, the love and mutual respect was back to a base level.

Even at the age of 34 and managing the forced evolution of his own game, he still managed to hide the problems at the club, both political and sporting, with his own brilliance.

The damage was done a long time ago. Bartomeu remains chiefly responsible for the biggest mess Barcelona have potentially ever found themselves in. Laporta has continued the sense of entitlement which needs to be fumigated inside Camp Nou before anything gets better. He rightly says nobody, not even Messi, is bigger than Barcelona, but he has been accused of using Messi as a pawn and it is easy to see why, so wedded to the European Super League are he and Florentino Perez, his Real Madrid counterpart, you wonder what choice he would have made if he could have re-signed Messi for the price of abandoning it.

Messi isn’t being viewed as a total victim here. Not unanimously anyway. Graffiti adorned the walls on the way into the stadium calling him a traitor. It was quickly painted over but clear enough for him to read if he was driven past at the right time. Barcelona fans and socios are as clear as anybody on the situation. Helpless as they are to stop it, there is a desperate sadness radiating from them. But a consensus of others suggesting Messi could play for free to remain at the club is growing. He said he did everything asked of him, including halving his salary, but if he cares as much as he says, why not just play for nothing?

Barcelona’s debt is so high that even a gesture as grand as that wouldn’t have made a difference, putting aside the absurdity of such a suggestion. Laporta claims there were losses of €487m last season. Messi loves the club and the life he built in the city he calls home; he told his three children they would return one day. Nobody should ever be expected to work for free, especially when players like Philippe Coutinho and Antoine Griezmann are a much heavier financial burden in terms of what Barca get out of their deals.

But that is symptomatic of the wider discourse around Messi. More is expected of him every year on the pitch, and in a world where loyalty in football is almost becoming a myth, there is a feeling he should behave a certain way because he is held up to a different standard. Nobody ever expected him to leave Barcelona, apart from anything else because he would prove too expensive, but nobody really wants him to either. The image of him wearing that shirt became romanticised; it has been jarring to have to let it go.

What next, then? Destination Paris, almost certainly. It makes sense. Neymar, his former Barcelona teammate, is at PSG and has been attempting to persuade him to join for a year, but they are also one of just a few clubs who can afford him, even on a free transfer. There will be those who see through his tears and heartache, believing he’ll quickly settle with earning millions in Qatari cash at the Parc des Princes, but the closing of this particular book will never sit right.

Messi’s Barcelona exit is about more than ending an era on the pitch. Perhaps, in a strange way, it’ll allow a clean slate and a new approach, but lots is still to happen on that front, including more sales. This is more about punishment: that of the club for their negligence, of Messi, forced out of where he wants to be, and football, unable to comprehend a new dawn and losing the one constant it had left.