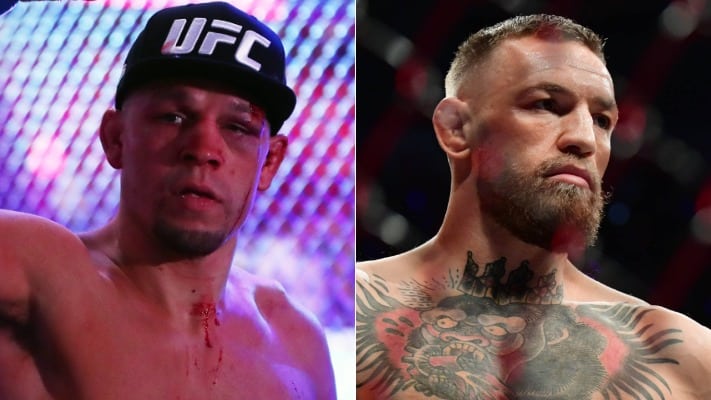 UFC star Nate Diaz took some time out of his day to take shots at two of his bitter rivals; UFC lightweights Conor McGregor and Dustin Poirier on his Twitter page, suggesting that he knows the solution to beating both of them in the UFC octagon.

Diaz has competed against McGregor twice at welterweight, while he was scheduled to fight Poirier at UFC 230 before contract negotiations fell through due to his prolonged tension with the UFC brass, including president Dana White. He most recently fought against welterweight contender Leon Edwards at UFC 263, losing by unanimous decision but nearly turning the tide in the fight’s final minutes.

McGregor recently fell to Poirier at UFC 264 after suffering a nasty broken leg in the closing seconds of the first round and is in the middle of a long road to recovery. Diaz thinks that McGregor should’ve been able to learn from his previous mistakes against Poirier in their trilogy bout last month.

Diaz may have to wait to fight Poirier, who is widely expected to fight for the UFC lightweight title later this year against Charles Oliveira. The UFC hasn’t officially announced and booked the fight but it is currently being targeted for December.

After his two fights in the octagon with McGregor in which both fights won one fight apiece, he came back in late 2019 to defeat Anthony Pettis before losing the self-coined BMF belt against Jorge Masvidal at UFC 244. He was out for about a year and a half before his recent loss to Edwards but has claimed he wants to remain active in 2021.

With McGregor expected to miss time until about summer 2022 and Poirier moving up the ranks to fight for the title, it could be a bit for Diaz to get a matchup with either of them. It’ll be interesting to see who Diaz faces in his next bout in the octagon.

Who do you think Nate Diaz should fight next?