Anticipating the haters
Reading this mornings mailbox I thought I would preempt the criticism coming my way way by expanding on my comment on the Joe Willock sale. Firstly, I am not in favour of his sale but see it as necessary to fund other potential deals.

Arsenal like most clubs are struggling to sell fringe / unwanted players. Ideally we would be selling Nketiah, Willian, Kolasinac, Nelson, Torreira, Elneny, Maitland Niles, Lacazette and a right back. If Arsenal could sell most/some/any of these players there would hopefully be funds for a creative midfielder, striker & back up keeper. However their all still Arsenal players and we have limited or no money for the players we need. The one player we have interest is Willock and without departures how much does he play?

In the 4,2,3,1 system we play the only space for him is as one of the 2 which means alongside Partey. He is not better than Saka, Partey or Martinelli for a wing spot. While also definitely not being a 10 or striker.

There has clearly been a judgement that he can’t play in a midfield 2 so a sale is painful but ok. There is talk of long term moves to 4,3,3 for Arsenal in which case Willock could of played in the midfield 3 however our needs right now require funds which explain the sale. In an ideal world there would be both a buyback clause and sell on clause but I am not optimistic.

I reserve judgement on Arsenal’s transfer window until 1st September but am anxious. We have signed  a back up left back, Lokonga looks encouraging and will probably play against Brentford, White is a long term signing based on the desire for high quality distribution and running out from the back. The timing is frustrating but I see the logic. Sometimes you have to do what’s available in terms of signings not what’s most urgent. Hopefully we get the other things we need.

If the Willock sale allows Odegaard or A N other to sign in midfield and a back up keeper to arrive it’s worth it. If a striker arrives as well. It’s a good transfer window. However I am not optimistic. 6th/ 5th  and Europa League is Arsenal’s realistic target this season. Sadly.
Croydon Gooner

Arteta and Edu
So last season we had one of the best 3 defences in the league, even with Xhaka and David luiz taking turns with others to produce unforced errors leading to goals. Before Emile Smith Rowe, at some point we where 20th in terms of chances created, even when Odegaard came we still struggled in most games to create chances. We relied on fine margins..with a midfield that rarely scores, a misfiring Auba, 8th place was because Grealish got injured, and Everton where terrible.

What did we do? We only improved our only strong area(White). We got 2 substitutes players, and we are desperately trying to sign last season’s worst goal keeper for £30m + to act as a back up.

So we play Brentford on Friday. Are we stronger than last year? Emphatically NO. So we have spend £73m already without solving last season’s primary issues.
Kufre

A problem like Maria
Look it’s a good article, she’s clearly good at her job and very adept at selling players – which as my own club have proved, is a very difficult thing to do, especially at the moment.

However, Chelsea did spend £250m (£220m, whatever, it was a lot and let’s face it, not all of those worked out) last summer, they also spent £70m on Kepa, £35m on Drinkwater, and ended up getting a transfer ban for the shady dealings between 2013 and 2016, all of which presumably Granovskaia had a hand in too (as she took over from Ron Gourlay in 2014 according to the article).

With limited options available in the winter, they hired Tuchel which was clearly a masterstroke in retrospect, won the CL and even Havertz looked good by the end of the season (less so poor old Timo Werner) but that stems from the Lampard appointment which was, by any measure, not a good one.

Now they’re spending £97.5m on Lukaku, time will tell if that is a good move or not but that’s a lot of cash for a 28 year old with nearly 500 professional games under his belt and a pretty heavy frame, and he was their second choice in any case. The CL win suggests on the whole, she’s been successful but it’s not exactly been smooth sailing has it?

Anyway, as with all things there’s some nuance. Is she better than Ed Woodward? Yep (OK, low bar). But is she some heady combo of Angela Merkel, Rihanna and Gina Rinehart in the business and politics sense? I’m not so sure.
Jonny, MUFC

Spare us the fake tears…
Alright, I’m sick of hearing about poor Messi and how it’s a travesty he is leaving Barcelona. A massive part of the reason Barcelona are in the financial mess they are is because Messi and his dad negotiated his last contract for €550m – that’s half a billion for the people at the back. That was his pay including bonuses, for doing his job. Excluding endorsements etc he would have been paid for during that time.

Naturally that level of pay had knock on effects to the rest of the squad and perspective signings. Sure, the former officials at Barcelona need locking up for signing those outrageous contracts. But let’s be real here, Barcelona the club has played in front of empty stadiums for c. 18 months. I don’t know the ins and outs but they will have also seen a commercial income reduction. Messi has made close to €1bn from football, he does not need to go and play in Paris earning another €30-50m a season for 2/3 years (depending on which reports you read). Imagine the boost to his reputation if he decided to stay at Barcelona and took a minimum wage salary for a season until they can pay him in line with the rest of the squad – but it’s not going to happen, it’s not even an option because as much as we like to pretend otherwise there is zero loyalty in football. He hasn’t got any to a club unless they are paying him.

Spare us the fake tears Messi, you could stay if you wanted to but you want to keep making crazy amounts of money.
James B 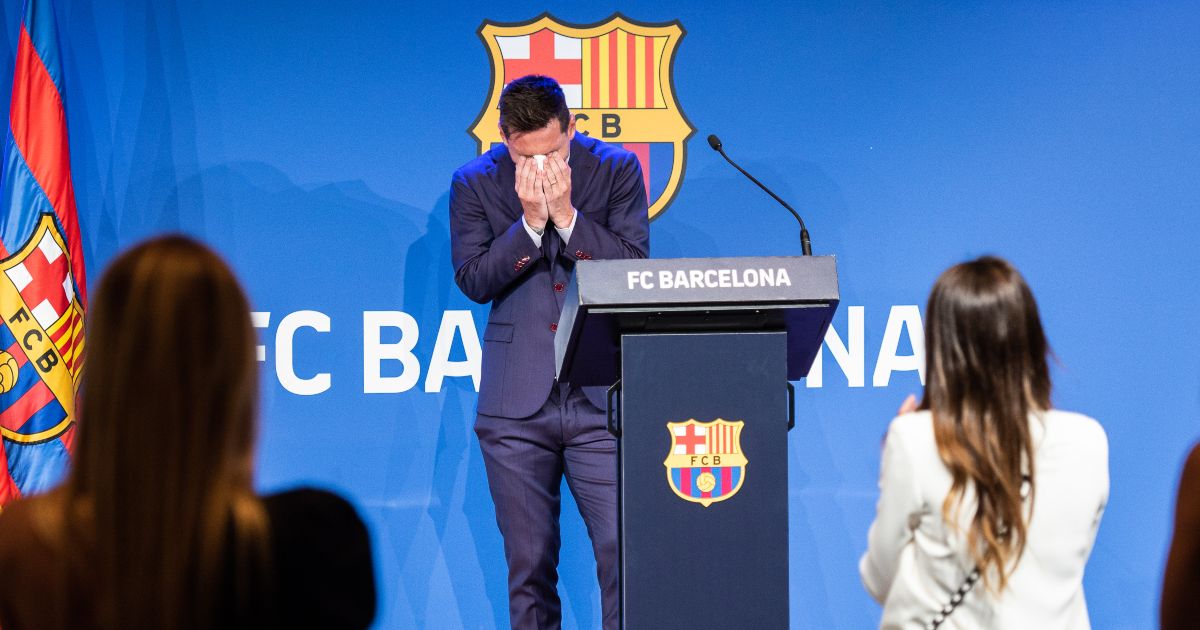 Since 2005 he has pulled down the pants of every top-class club you can think of.

Do we really think Messi can put David Alaba on his arse then chip Manuel f*****g Neuer (with his right foot, no less) but would somehow struggle against Robert Huth or Paul Mcshane?

Get out.
Silvio Dante

As a Liverpool fan, I’m surprised Mike in the morning mailbox doesn’t remember that Kevin Keegan left us after winning the league and European cup for a new challenge in Hamburg.
Abiodun (F365er since the daily email days)

Not that Messi cares what I think, but…
It’s a transfer lacking in bravery. Even if he scores 50 goals this season now and wins the CL it won’t enhance my opinion of him. Had he gone to either Manchester club and done it (or Juve), then it probably would have done.

Little biased as I’ve always been more Ronaldo than Messi, but I just don’t think there’s anything that Messi can achieve with PSG that will make me sit up and think ‘he’s even better than I already thought’.
Andrew M

Chris NZ’s initial suggestion was that a club has to pay out the full value of the contract and this would always be paid up and should be treated as deducted from the transfer fee.

Richard, Brighton then endorsed this, citing the secret footballer, who did indeed suggest that that is how it works legally.

Well, the truth of it is that it depends on the player, the circumstances and the contract, as Richard rightly says. Richard goes on to say that the obligation to pay in full just makes sense, because a contract is a binding agreement between two parties, so player will be expecting to be paid. But, per the binding agreement, the player gets that money in exchange for playing football, for that club, not for someone else… I wouldn’t be thrilled to pay Kane for four years of banging in goals for City, if I were Tottenham…

My reading of that extract from the Secret Footballer is that he was being pushed out by the club. He had £1.4m left on his deal, so he “only” earned £27k, so was probably not a big fish with, for example, Man City lining up to take him in a reported £160m deal where he’ll probably get a massive pay rise.

I can tell you now, in the Kane example, if he wants his move, Tottenham are not going to pay him the entire balance of his salary, despite him playing for another team. There may be some sort of loyalty payment, or cut of the transfer fee, but I’d be astonished if it was the entire value of his weekly salary – unless Kane was willing to blow his deal up, lose his pay rise and shot at glory, or Man City were willing to pay an additional premium.

In fact, in English contract law, it is not the case that if one party terminates, the other gets paid the full value. The wronged party has a duty to mitigate their losses (I.e. to do what they can to minimise their loses, in this case, getting another job). So taking the Kane example, based on salary alone, if he got wrongly terminated tomorrow, City would sign him and pay him even more than he earned at Tottenham, so he wouldn’t have a valuable claim for loss of salary and he wouldn’t have a right to “double recover” from Spurs. He may have different claims around loyalty bonuses, image rights or whatever but, again, has to mitigate (some he could, some he couldn’t), so again, I’d be astonished if his claim is the full value of his contract.

Kane’s scenario seems different to the Secret footballer or, using a contemporary example, the Phil Jones scenario. United are reportrdly going to let him go this summer. Whichever club he goes to will not be paying him the £75k a week he currently earns, so United will have to cut a deal and subsidise his salary (canny move giving him that new contract Ed Woodward…).

Of course, talking about the terms of Kane’s current contract (which we don’t know anyway) are irrelevant, because this would be a negotiation to terminate it prematurely. A negotiation that, seemingly, he’s desperate to have, while the club appear happy to keep him and, for City’s part, they seem reluctant to meet the required fee. For Kane to get his wish, I would guess he’s the one who needs to back down over any large incentives in his Tottenham deal. Then Kane may want to sue his agent for negligence…
Andy (MUFC)

Still not a bad team all the same:

Which makes me wonder: I never thought I’d ever see Messi leave the Nou Camp, and the fact that money talks more than ever, is the whole idea of a player spending his entire career with the same club over as a concept?

Not a particularly important point…
But I do have a slight issue with seeing Steven Gerrard repeatedly mentioned alongside other ‘one club heroes’, which seems to conveniently forget his season in the MLS after leaving Liverpool.I’m sure this wasn’t financially motivated and he’d always dreamt of playing for [checks notes] LA Galaxy 😉
Adam Thomson