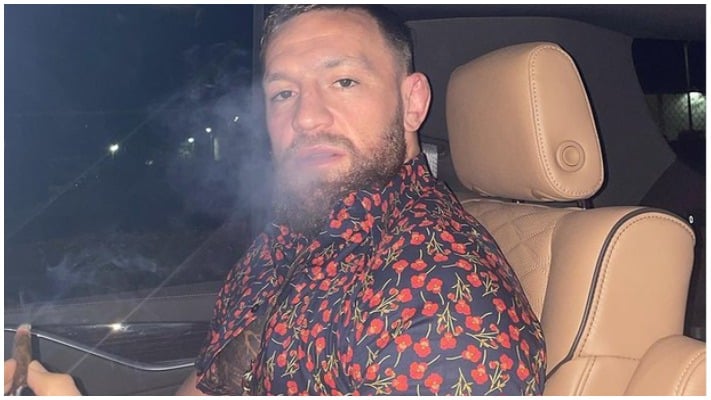 Former UFC featherweight and lightweight champion Conor McGregor continues to enjoy his time away from the octagon, as he continues to recover from a devastating leg injury he suffered at UFC 264 in his trilogy with Dustin Poirier.

That includes smoking marijuana in California and claiming that he even owns a farm of the drug in Oregon.

McGregor has been spending time in California in the Los Angeles area since before his fight with Poirier, training at a nearby “McGregor FAST” gym leading up to the fight and spending time with his family in the Golden State.

“A big blunt. Yeah, look at the neck on me! I’m getting jacked,” McGregor said in a video posted to his Instagram story. “A lovely strain! It comes from my hemp farm in Eugene, Oregon.”

“We’ve been testing some different strains out. This one is indica dominant, but we’ve a lot of quality produce in the works for our fans.”

“The land around Oregon, and Eugene in particular, is absolutely breathtaking. I’ve the best hemp farm in the USA. Produces nothing but quality!

The videos posted on his social media divided fans, with some believing he is in a rough place while others believing he is just enjoying himself in a state where the drug is legal.

McGregor’s demeanor has been criticized and also supported since his pre-fight antics with Poirier leading up to UFC 264. He went far in the trash-talking realm, attacking Poirier’s wife and also promising to kill him when they fought.

In the closing seconds of the first round, McGregor’s leg snapped and the fight was quickly stopped due to a doctor’s stoppage, leaving an unusual conclusion to one of the most talked-about trilogies in UFC history.

McGregor will miss the rest of 2021 with a return to the octagon tentatively targeted for some time in 2022. UFC president Dana White has already confirmed that a fourth fight between McGregor and Poirier should happen at some point, but fans will have to wait for a bit and in the meantime enjoy his presence on social media rather than in the octagon.

What is your reaction to Conor McGregor’s latest antics?