Not romantic but really very sensible

He came to Barca as a 13 year old, grew up there, fell in love there and raised a family there. The entire city knew and loved him and he did loved them too. In 21 years he won everything there was to win, set numerous records and gave the city more pride and prestige than any one sporting individual ever has. He stayed when he easily could have gone and never spoke ill of the club. He was expected to sign a deal as he was told, only to have to leave unexpectedly in the end. The world’s best player was left without a club and without a clear idea of what’s next. Townsend I can get, Messi I cannot. Not easy anyway you look at it.

Now you may say ‘He was well compensated for it’. One, that has nothing to do with emotions and this tears, and two, Barca got what they needed out of him. They got a haul of trophies that all depended on him. Go on, tell me another player who could score 91 goals in a calendar year? I’ll wait..

Not only that, but his marketing ability and merchandising potential dwarf every other player on the planet. I remember when Real signed Kaka, they said his shirt sales paid for the transfer within two years. Barca were making roughly 32 million pounds/38 million euros per year in Messi shirt sales, just shirt sales.

Not only that, but I read on Sunday that 10% of all visitors to Barcelona – the city – list Messi as their reason for coming. So not only did Barca gain from him, the entire city, league and country benefited from his glorious ability. That’s about 2.8 billion euros to the city. That €550m isn’t looking so grand now is it..

Messi has been there and done it all, and if he wants to take a massive payday while at the same time putting himself in a better place to win the CL, then fair play to him. He owes Barca nothing, and if they don’t want their highest performing player to stay, that’s on them. They can pay Griezmann almost the same to do nowhere near as much.
Calvino (Next time you can get more than your friends and relatives to visit a city, come back to me)

Correcting some Messi nonsense
Seeing people talk about Messi leaving Barca on Twitter and in the mails (Hello James B in particular!) who clearly don’t know what they’re talking about is getting beyond annoying. So, one more time for the people in the back: As Messi is out of contract, any new contract he signs would mean he needs to be registered by Barcelona as a new player. Barcelona cannot register any new players unless they dramatically reduce their wage bill. Even if Messi signs for free (Has any other player ever been expected to play for free?) it makes no difference. Barca’s wage bill would still be too high, they couldn’t register him and he couldn’t play. I’ve even seen it suggested that he should sign for nothing and stick around indefinitely until the wage bill is low enough for him to play. Because having the greatest player of all time sit on his hands not playing and not being paid at the age of 34 is exactly how he should be expected to wind down his career. Clearly leaving Barcelona hurt him and, seeing as choosing to take a massive wage cut didn’t help one bit, he has every right to take the highest offer he can and enjoy the last few years he has left.
Jamie Smith LUFC

…I would just like to point out that in the last Mailbox, James B had suggested that Messi leaving Barcelona is due to a lack of loyalty, and the only way he could possibly show any loyalty was by playing for minimum wage.

Ignoring the many practical reasons why this wouldn’t be possible, a simple look online at one of the MANY articles today on Messi’s transfer, most of them will mentioned that under Spanish employment law it would be illegal for Barcelona to reduce Messi’s pay by more than 50%. I would assume this is intended to protect lower paid workers, but it would be unfeasible for exceptions to be made for the highest paid workers.

Next time, feel free to spend 10 minutes on Google before deciding to get angry at something and firing off emails left right and center.
Stu, ‘Not an expert, but can use Google’. MUFC

Messi is Jerry Maguire
While Messi will be remembered for being a great footballer and bringing huge success for Barcelona, depending on how things go this year, he may also be remembered for killing Barca off.

Barca clearly have a lot to answer for with some poor transfer decisions – but so do many other clubs. But how much of that was predicated by Messi’s desire and push for continued success. While being paid a stupidly large amount to play, he was also demanding on who they signed, creating an even more difficult situation for the club.

As if he wasn’t confident in his own ability to be the leader of the team, he needed them to bring in other expensive players to support him.

Then the issue about playing in the Premier League. What I will say is that the Champions League data against teams from other leagues is bogus. The strength of a league is in its depth. The top teams all go for it (except Mourinho led teams) in the CL final rounds. They have home and away games and we often see high scores – both ways.

However, when it comes to league games, the less fancied Premier League teams have not been so free, playing midfield versions of parking the bus, that Messi may or may not have a hard time handling. Not quite the cold, wet midweek game at Stoke but there is something to be said about lower league tactics and whether they have the coaching and players to pull it off and the EPL does.

But it’s a moot point. Its not about playing for a higher or lower level league. It’s all about the money. Like Tom Cruise in Jerry Maguire, it’s always about the money with Messi. PSG are one of only two teams that could have afforded it and one team willing to pay it.
Paul McDevitt 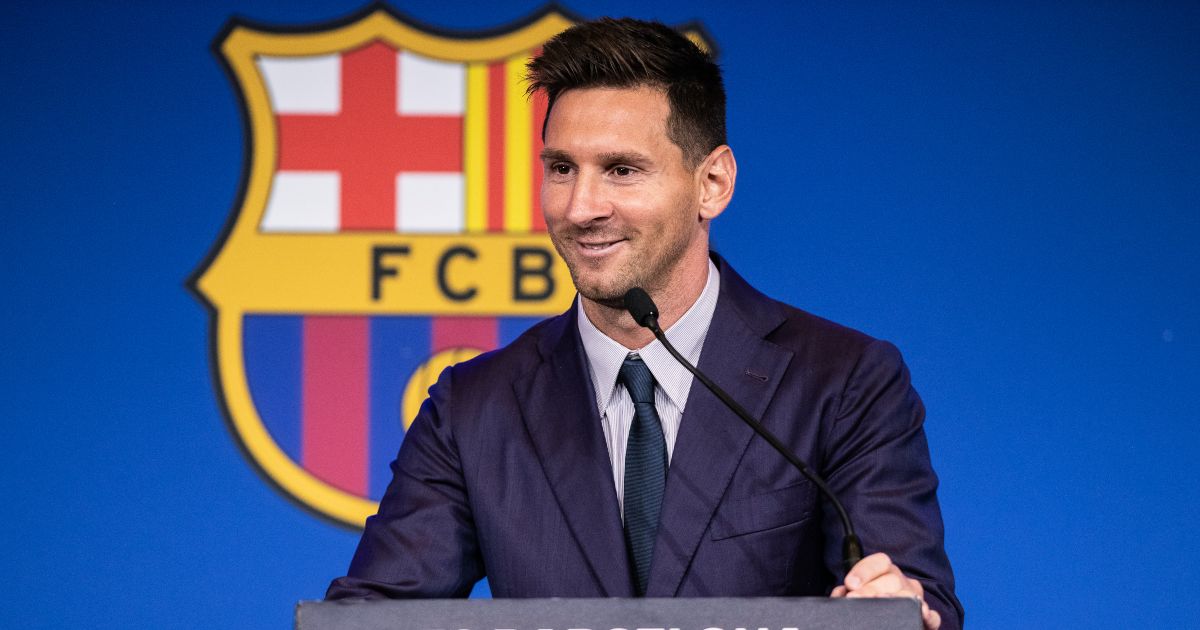 What now for DVB?
With PSG securing Messi, Pogba definitely stays at United, and I am once more hopeful of United resigning Herera in the PSG fire sale but where does this leave poor Donny?

The prevalent belief is that United will switch to a 4-3-3 this season opening up space for Van De Beek in a midfield 3. Unless Varane becomes a combination of Van Dijk and Kante, there’s no one United can put with DvB and Bruno in a midfield 3 to have any defensive solidity in the middle of the park.

Matic and DvB can look great in a pre season friendly but I don’t see them doing great against top opposition.

So what has Ole seen to keep DvB? I have a sneaking suspicion he might play him as a false 9. United are light up top, reliant on a 34 year old, albeit great, striker.

If Cavani gets injured playing DvB as a false 9 with Rashford/Greenwood, Sancho and Bruno behind him will unlock most defences.

DvBs greatest quality may be making off the ball runs, with Bruno firmly occupying the number 10 position, DvB doesnt get a chance to play there and make runs into the box. He’s more of a second striker kind of number 9 than an orchaestrator ala Bruno Fernandes.

In the mid field he tries playing quick one twos but there are very few players United has that like that style of play. Rashford likes ball in space he can run onto, Greenwood dribbles, Bruno loves ball to his feet, Pogba loves time on the ball – a Van de Beek style player looks lost in such a set up. His runs aren’t picked up, the ball isn’t played quickly enough back to him and he doesn’t have the confidence yet to impose himself.

Putting him up top and letting him occupy the defenders as players make runs off him may work a lot better. The boy definitely has goals in him and first time passes can catch defences off guard.

Hes definitely a better shout for a false 9 than cesc fabregas ever was.
Shehzad Ghias, MUFC, Karachi

A returning XI
Inspired by the one club man XI and Romelu Lukaku, here’s my “returning” XI, of players who realised their mistake (or made it twice).
Extra credit for being expensive like big Rom.

The honorable mentions list is far too long to name everyone, so I’ll just leave it there.
KC (shout out Chelsea for being involved in £200m or so of this)

Wilshere next?
Jack Wilshere to Arsenal? Makes a bit of sense, no?

Free transfer. Will likely accept shorter contract with lower wages and/or an incentivised contract based on playing.
Technically sound. plays in No.8 and No.10 and gives exactly what Xhaka and Elneny don’t (theoretically) – A bit of movement and drive.
Homegrown (also ‘knows the club/has passion/Arsenal DNA’ etc etc)
Fans will still have a soft spot for him (goodwill on the bank)

YES he is super super injury prone, but with no Europe he can be used sparingly and or as substitute (squad depth)

I would still prefer a more long term and forward thinking signing (Odegaard, Maddison, Auoar) but if none of them can materialize the Wilshere can be closed without fuss and won’t be the worst move.

It just makes sense. And I still love Wilshere so would like to see it happen.
Hats, Gooner, Sri Lanka

Spare a thought for Rangers
So Rangers got knocked out of the Champions League qualifying round, as they are my Scottish team thanks to my dad, I am disappointed, but it also got me thinking, how is it that a country’s “champions” have to qualify while the also rans go straight into the group stage, not really fair is it?

No I know I will be bombarded by “it’s an inferior league”, or coefficient arguments blah blah blah, but these smaller nations are never going to improve their coefficient ratings if they have to squeeze preliminary rounds into already packed scheduled. After all it is “Champions” league, shouldn’t ALL qualifying countries champions go straight into the group stage and the also rans can play in qualifiers, it would certainly lead to more diverse groups than the usual bunch of cashed up monopolies.
Andrew Goonerabroad Brown