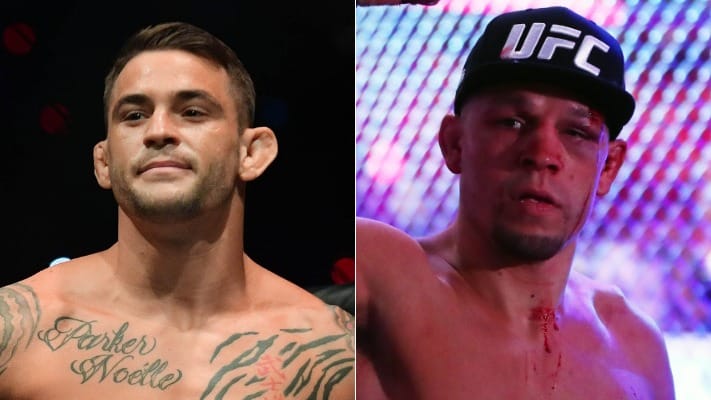 Dustin Poirier is not a fan of Nate Diaz‘s recent antics on social media, and he has responded with a subtle callout of the UFC fan favorite via a recent post on his Twitter page.

Poirier is fresh off his win over Conor McGregor at UFC 264 via doctor’s stoppage and is widely expected to face Charles Oliveira for the lightweight title for his next appearance in the UFC octagon. Poirier was supposed to fight Diaz at UFC 230 but the fight fell through with both men accusing the other of being the primary reason for pulling out of the contest.

Poirier has had plenty of issues with Diaz’s trash-talking online and took the opportunity to call out the Stockton native on Twitter.

“Let’s fight don’t be scared this time though,” Diaz tweeted.

Diaz recently taunted McGregor on social media as well for his performance against Poirier at UFC 264, saying that he intends to show the Irishman how to beat Poirier in the UFC octagon. Diaz has previously stated that he intends to remain active to wrap up 2021 but he doesn’t have a fight scheduled as of right now.

Poirier is expected to fight McGregor in a fourth bout between the two rivals in the future, as all but confirmed by UFC president Dana White in multiple interviews. He’s also called out Diaz for a fight ever since he beat McGregor in their second bout at UFC 257.

A fight between Poirier and Diaz would definitely garner the attention of fans, but it would have to be at welterweight as Diaz has previously stated he’s done cutting down to 155 pounds. Regardless of not having a title on the line, it would be a big fight for both men to enhance their star power in the UFC.

Do you think we’ll ever see a fight between Dustin Poirier and Nate Diaz?