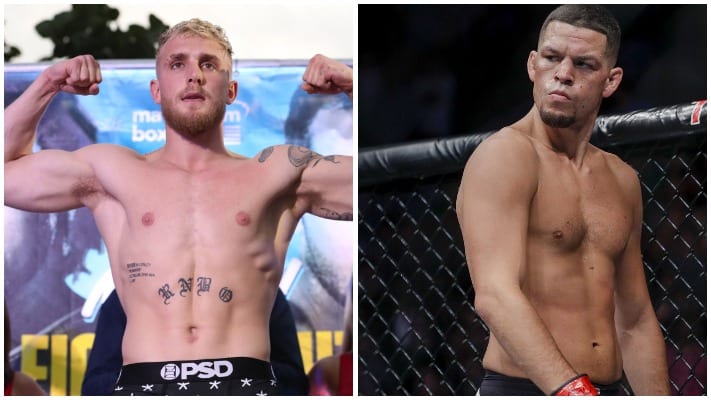 Jake Paul says he would prefer to fight Nate Diaz over Conor McGregor.

The YouTuber turned professional boxer has been relentlessly calling out McGregor since he entered the combat sports world in 2020. For the most part, ‘Notorious’ has ignored Paul but has also refused to rule out squaring off against him down the line.

McGregor is currently healing up after fracturing his tibia and fibula at UFC 264. The Irishman took his trash talk to another level ahead of his third fight with Dustin Poirier and has continued to aim below the belt at ‘The Diamond’ and his other rivals on social media since the fight.

Paul believes McGregor is struggling to deal with the fact he’s past his peak.

“Look, he’s this guy that was the sh*t for so long and the center of attention, and now his career has plummeted,” Paul told MMA Junkie. “He’s falling off. He’s 1-3 in five years and it seems as if people don’t really care. He’s disrespectful. Even to the point where it’s too far. There’s a point in this where it’s like, ‘Cool, yeah. It’s the fight game. I said what I said. Get over it.’ Talk as much sh*t as you want. But there’s a point where you look dumb.”

“It’s not even that he’s being disrespectful, he just looks dumb with the sh*t that he’s saying,” Paul added. “Threatening to kill people and then he’s out partying, back to drinking, hitting the clubs in L.A. I don’t know, man. I think it’s over for him and I don’t think his ego can maybe accept that.”

The demise of McGregor has led Paul to focus on a potential crossover bout with Diaz.

Do you want to see Jake Paul vs. Nate Diaz?