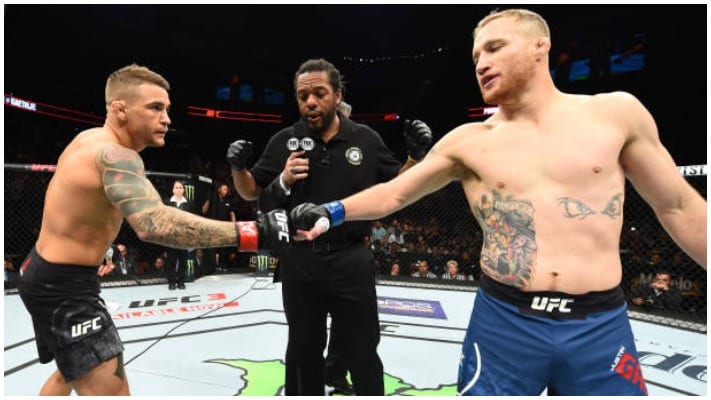 Justin Gaethje believes he will square off against Dustin Poirier for the lightweight title in 2022.

The 155lb duo previously fought in 2018 in what was a Fight of the Year contender. Gaethje and Poirier went to war for four rounds before ‘The Diamond’ closed the show.

Gaethje is set to face Michael Chandler at UFC 268 on November 6. The event is currently scheduled to take place at Madison Square Garden in New York but things may change in the coming weeks due to a vaccine mandate in the city. Gaethje and Chandler have both publicly expressed their desire to see the event relocated.

Poirier is fresh of a second successive win over Conor McGregor. The former interim lightweight champion knocked ‘Notorious’ out at UFC 257 in January before an unfortunate injury brought a premature end to their trilogy bout at UFC 264 on July 10. A fourth fight between the two rivals remains a possibility although McGregor is not expected to return to fighting for until summer 2022.

‘The Diamond’ is now next in line for a shot at the undisputed lightweight title that is currently held by Charles Oliveira who picked up UFC gold by knocking out Chandler in May.

Gaethje believes he and Poirier will be successful in their upcoming bouts. If so, that would set up an eagerly anticipated rematch for lightweight gold.

“@DustinPoirier will KO @CharlesDoBronxs in December,” Gaethje wrote. After I break @MikeChandlerMMA on Nov 6th at any venue on the planet, I will get my rematch and you will see a replay of the best fight that happened on earth in 2018. That’s a year to look forward to

Gaethje then added that he’d prefer his fight with Chandler to take place in America.

“Preferably any venue on the planet in America lol”

Do you think we’ll see Justin Gaethje rematch Dustin Poirier for the lightweight title in 2022?