Nathaniel Wood Hopes To Heal Up In Time For Fall Fight 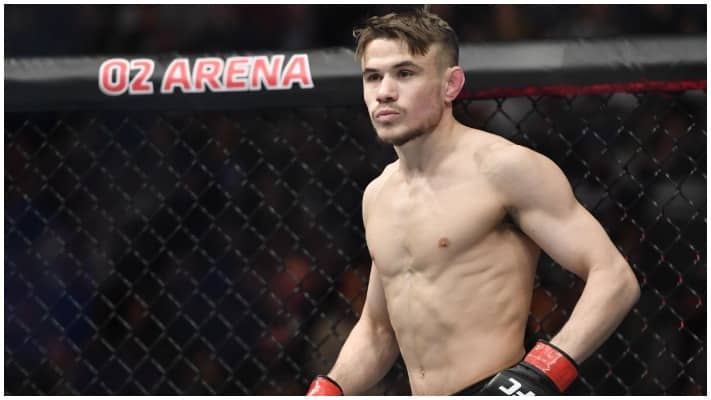 Nathaniel Wood was due to square off against Jonathan Martinez on September 4.

Unfortunately, a hand injury forced the UFC bantamweight prospect of the bout, and he’s now in a race to get fighting fit before the end of 2021.

The 28-year-old broke his right metacarpal in training and now faces a six to eight weeks recovery period before he can get back to training.

“Fortunately, he (the doctor) said six to eight weeks, which, you know, I’m happy with that because I fought straight away, ‘ahh that might be six months,” Wood told LowKickMMA. “The doctor turned around and said, ‘you’ve broken it, but you’ve kind of broken it as best as you could, we don’t need to do pin it. We don’t need to operate on it. It’s just a case of leaving it now, let it rest.’ He said six weeks at least, but he said maybe a little bit longer. So, you know, in my head, I’m thinking if it’s six weeks, eight weeks fight camp, you know, hopefully 14 weeks (I’ll) be back in there. I’d like to make sure that I’m there for November, December and get one in before the end of the year.”

Wood is just thankful that the UFC’s proposed return to London has been scrapped and he still has the chance to compete in his hometown the next time promotion makes the trip.

“As far as I was aware, we was just getting ready for London,” Wood said. “I think a week before I broke my hand, they said, ‘okay, it’s now been moved to Vegas.’ I can only imagine that, you know, COVID got in the way of things again.”

“Unfortunately, it wasn’t London, but if anything, I’m kind of glad now, because now that I’ve broken my hand, if it was London, I would have been absolutely devastated,” Wood added. “If anything, I think I would have just had to lie about my hand and go in there with one hand. For me, that would’ve meant everything to be in London. So, the fact that it’s been moved anyway, you know, that’s great. Hopefully that means they’ll get it back on soon and I’d like to think that they’ll put me on there.”

Who do you want to see Nathaniel Wood fight once he is fully fit?

Back at Last! – Milwaukee Admirals