‘Arteta out’ just one game in from Arsenal fans

Arsenal fans already want Mikel Arteta out after just one game, while Ben White had an absolute disaster. Send your thoughts to theeditor@football365.com

Best result ever
Although growing up as a Spurs fan, as a kid I watched a lot of Brentford games as being in the lower leagues they were a lot easier to get tickets to watch (and closer!)

Therefore Brentford beating Arsenal in their first premier league game is the best result ever.
Paulo (so pleased my dad was there tonight)

2. In fact, that was a horror debut from Ben White who didn’t really impress once. More mistakes than Luiz, could not win an aerial duel to save his life and was dribbled past several times. I can’t remember a worse debut for an Arsenal player in a very long time. You shouldn’t judge a player after one game but for that price, he will be. Not his fault but once again, it highlights the problems with Arsenal’s recruitment. Hopefully he’ll be able to show off his passing and dribbles against Norwich.

3. One undeniable impact of Arteta’s tenure as Arsenal manager has been an improved defence – until now. Whatever sauce he added, it’s looked totally absent in pre-season and now in the first game of the season too. Arsenal look weak defensively again. Metaphorically and literally.

4. Arteta deserves the sack for one reason alone – the impact he’s had on Arsenal’s attacking fluency. So much gets blamed on personnel but since he took over, Arsenal’s fluidity, intent, confidence and just plain competence in attack has waned. Watching Martinelli, Balogun and Pepe tonight was painful – they looked totally incoherent; as if they haven’t been properly coached in how to attack in over a year.

5. Arteta promised a ruthless squad revolution at the end of last season. It hasn’t happened and the few changes that have taken place (involving £80m of spend) have arguably made the squad no better than it was before. At least Edu has had some lovely holidays though.

6. The goalkeeping situation is a disaster. Leno is not good enough – he never has been. Especially not for how Arteta wants to play football. The decision to sell Martinez was bizarre at the time but the decision to keep going with Leno this summer is looking beyond stupid. This stupidity is compounded by Arsenal’s push to sign Ramsdale as sub-par competition instead of finding a true replacement. It’s a blessing that Sheffield put a valuation on him that even Edu wouldn’t pay. Bringing someone in to slowly take over is a nonsense. Leno needs proper competition immediately.

7. Chambers seems like a very nice lad but he’s not good enough to play right back against a high energy team like Brentford or Leeds. He can’t keep up with the play which meant he was ineffective both defensively and in build up. Pepe was so isolated; the right side of Arsenal’s attack became redundant for most of the game.

8. Arsenal’s right back situation is a shambles. Five potential right backs but… Chambers isn’t good enough for 30-40% of opposition teams, Bellerin has no drive anymore, Soares simply isn’t good enough to play for a top half team (ask Southampton), AMN doesn’t want to play there and Tavares is actually a left back. Right back will be Arsenal’s gaping wound of an achilles heel this season.

9. Speaking of achilles heels – given Arteta seems too inept to coach attacking football, supremely talented attacking players are desperately needed to simply score a goal. Everyone seems to know Arsenal need a creative attacking midfielder who can play an accurate fast pass to the Arsenal strikers that want to make runs in behind (assuming Auba, Martinelli and Balogun even remember how to do those now). But Arteta doesn’t seem to want to play that way and instead, is seeking a striker that can play weird Arteta-ball. I just have no idea who that is or who Arsenal will actually buy. How many strikers in the world have the nous, physicality, touch and pass to play quality link up, as well as the legs to press and the pace to charge into the area. Do they even exist? Lautaro maybe… but no chance Arsenal get him. Plus he’s probably not big enough. Plus if Arteta does regain focus on a 10 that can pass, who can they get to play at 10? Odegaard or Maddison would be useful but they both seem very unlikely. Aouar? There’s a reason no-one has snapped him up on the cheap this summer. The way forward in attack looks foggy indeed.

10. With upcoming fixtures against Chelsea and Man City, Arsenal could easily be 0 goals scored, 8-9 conceded after three games and be bottom of the League. Yes it’s a tough start but surely that kills the clubs chances of signing quality players late in the window.

11. Some positivity… ESR, Saka and Tierney are fabulous players getting better with every game. It feels like they aren’t anywhere near their ceilings either. Three truly exciting players, two of which have 5 years contracts. Sambi looks like he could become a quality player too… but probably not this year.

12. This is going to be yet another bad season to be an Arsenal fan… it’s becoming hard to remember the good ones. They feel like a very long time ago… definitely pre-Kroenke.
Ben (London)

Arteta out
Simple; Arteta trying to fit square pegs into round holes. Coach to the strengths of your players, not the other way around. Kroenke out, followed by Arteta. Arsenal are a punchline right now and nothing will change until the aforementioned happens. It’s so obvious.
Ken, expat gooner

…I think I am seriously reaching peak #WengerIn after watching that. So bad. And not surprising which is the sad part.
T, AFC

We just lost a football match
I went to an actual game of football. With crowds and everything.

My cheeks hurt from laughing with friends I hadn’t seen for over a year and a half (what with one thing and another).

Arsenal lost a football match is all.
Stefan The Grateful Gooner, Norfolk

Arsenal look like a mid-table team
Wish I’d have sent this mail pre kick-off to be honest because I would have liked a Nostradamus rep.

When the Arsenal lineup came out I thought to myself – Southampton.

Sorry if you’re a Southampton fan by the way. There just seemed to be a bunch of 6-7/10 players and absolutely zero star quality throughout the team. They won’t get relegated no, but 5th favourites for the league seems bonkers right now (sky bet).

I get there’s a couple of players missing, and Saka should have started.

But choosing between Emile Smith Rowe and Martinelli as your match winners is a sorry state of affairs for a once great club.
KC (had high hopes for Arsenal this year, lost them before kick off)

Welcome back, fans
Five minutes into Brentford vs Arsenal and I realise the reason I fell in love with English football, is the fans in the stadium!
Miller (SA, LFC since 2000) 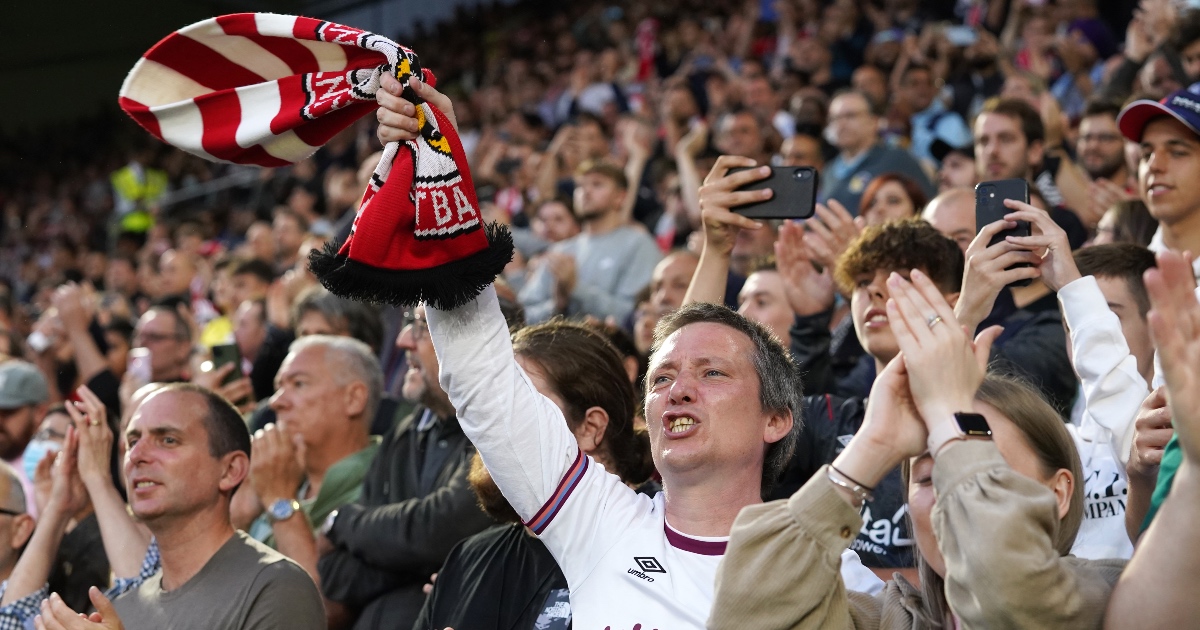 Can we just have fans?
Great to see football back with fans in the stadium. Nice to see one of the new boys win.

But boy oh boy, I really wish I had the option of stadium sound only.

I was a little sick in my mouth with Ian Drury making this into the second coming of Christ. Great though it was – it’s still football. It doesn’t need pre-prepared sappy, schmaltzy commentary.

While I missed football, I forgot how bad most commentary can be.
Paul McDevitt

Maybe Lawro had a point
Far be it from me to want to be seen to be defending Mark Lawrenson, but maybe he understands the approach that newly promoted teams might take when taking to their home pitch for their first premiership game against incumbent opposition. Yes, you’re able to prove via scurrying through readily available stats that the outcome usually falls in the more experienced sides favour in the vast majority of situations, but that’s not going to warm Mikel Arteta’s Horlicks this evening. Perhaps it’s dangerous because the opposition are more up for it than they may be by the time romance has given way to gritty November reality, and the ‘veterans’ have further to fall with an early blemish. I understand web pages need virtual ink, but maybe just wind your neck in a couple of feet, for objectivity’s sake.
Gavin Hoey, Dublin