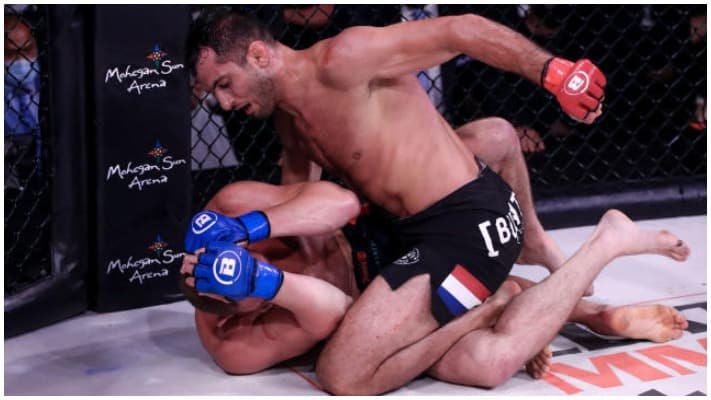 Gegard Mousasi made another defence of his middleweight title when he faced off against John Salter in the Bellator 264 main event on Friday evening.

The challenger got off to a pretty decent start in round one. Salter secured a takedown and was able to maintain position, drop some strikes and ultimately see out the round on top.

Mousasi turned things around in round two. The Frenchman was able to land at will during the first few minutes. Salter momentarily escaped from the relentless pressure of Mousasi by once again taking the fight to the mat. Unfortunately for Salter, it wasn’t long until Mousasi escaped and went to work in the clinch before finishing the round with some nasty ground strikes.

The finish came in round three. Salter looked tired and Mousasi was shrugging off his takedown with ease. One particular attempt leaves Salter on his back and vulnerable. Mousasi jumps in with nasty ground and pound that ultimately forces the referee to wave off the fight.

Post-fight, Mousasi squared off with Austin Vanderford who appears to be next in line for a shot at the Bellator middleweight king.

How do you see Gegard Mousasi vs. Austin Vanderford playing out?

Canelo Alvarez On Caleb Plant: “I’ve Never Had As Much Bad Blood With An Opponent Like This One”