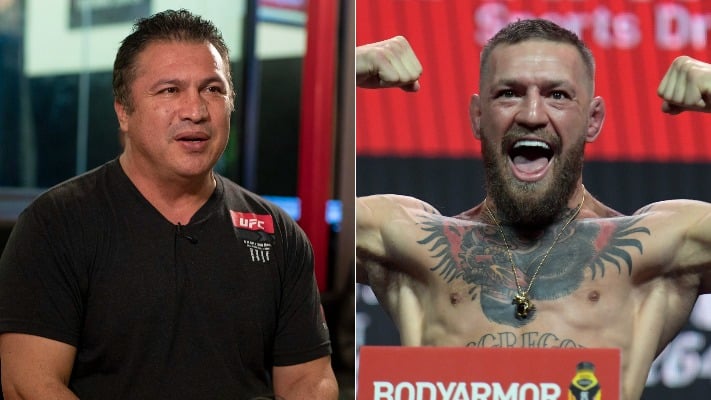 American Kickboxing Academy head coach Javier Mendez and UFC star Conor McGregor are on the opposite ends of the spectrum of recent events. Mendez is the longtime coach of former UFC champions Daniel Cormier and Khabib Nurmagomedov, while McGregor has viciously attacked both of them in recent weeks.

It’s safe to say that Mendez is not a fan of McGregor’s recent antics on social media. McGregor took a shot at Nurmagomedov’s deceased father in a since-deleted tweet, and made fun of Cormier’s weight, and mocked him for a recently intoxicated media availability prior to a UFC event.

Mendez has since responded to McGregor’s recent harsh comments on Twitter, which all began during the lead-up to his last fight against Dustin Poirier.

“Let’s face it, I had some choice words for him (Conor McGregor) that were way worse than DC” Mendez said during a recent episode of his podcast. “But I’m the lowly coach, so I’m not as important. At one point he’s going to come after me, and rightfully so. He has some shots coming at me because I fired some at him.”

“I never really fired at him. And now, I have. So, it’s only fair that he could fire back at me. And I accept. Whatever he comes at me, he comes at me with. He’ll do his research, but he’s not gonna have very much. I don’t really have much to come at me. He will come after me.”

Mendez’s comments come after weeks of bizarre outbursts from McGregor, primarily on Instagram and Twitter. Leading up to his fight with Poirier, McGregor attacked his wife and threatened to kill him in the octagon at UFC 264, a fight he would go on to lose via doctor’s stoppage.

Mendez is well-known for developing some of the greatest martial artists on the planet, including Cormier and Nurmagomedov. Mendez currently trains up-and-coming stars such as Islam Makhachev and Usman Nurmagomedov, two of the biggest names in the UFC and Bellator.

It seems like only a matter of time until McGregor unleashes another tirade on social media, and it seems like Mendez may be one of the top options for a potential target.

What are your thoughts on Javier Mendez‘s comments regarding Conor McGregor?