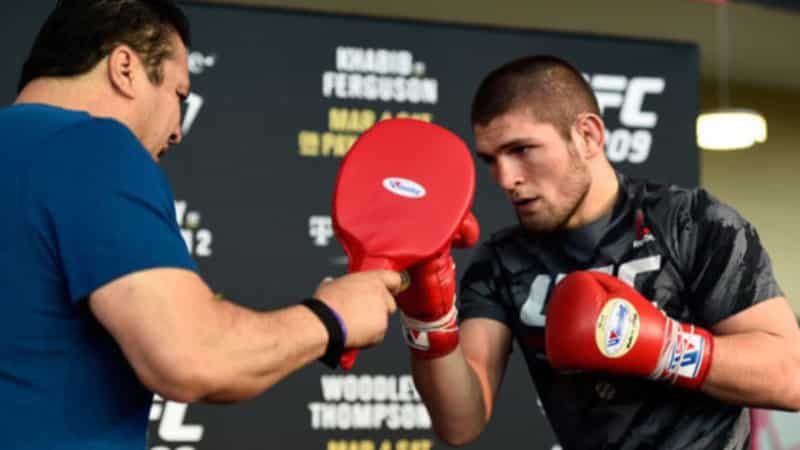 Mendez, the longtime leader of the San Jose, California facility, featured prominently in both the corner and team of Khabib during the Dagestani native’s illustrious time under the UFC’s banner. And since the undefeated Sambo specialist’s retirement following a submission win over Justin Gaethje in October of last year at UFC 254 — the two have begun cornering fighters together, achieving great success as a coaching tandem.

Khabib, who retired with a perfect, undefeated professional record of 29-0 — was asked on numerous different occasions by UFC president, Dana White as well as officials from the organization to snap his recent retirement, to no avail, however.

Bowing out with a trio of successful title defenses which saw him headline in three high-profile pay-per-view events consecutively, Khabib lodged a trio of stoppage victories over arch-enemy, former two-weight champion, Conor McGregor, as well as submission stoppages over former interim gold holders, Dustin Poirier and the aforenoted, Gaethje, respectively.

Appearing during a recent Q&A session, Khabib’s long-time AKA head coach, Mendez confirmed that financial gain, as well as status amongst fans and onlookers, most certainly changed Khabib, with the soon to be 33-year-old becoming more generous as a result.

Khabib, alongside his aforementioned foe, McGregor currently holds the record for the highest pay-per-view buy rate in the history of a professional mixed martial arts event. His UFC 229 bad-blooded bout with the Dubliner generated a staggering 2.4 million buys, falling just short of the 2015 boxing match between Floyd Mayweather and Manny Pacquiao with generated a whopping 4.6 million buys, as well as Mayweather’s 2017 bout with McGregor which earned a butyrate of 4.3 million.

Earlier this week, reports emerged that Khabib had put pen to paper on a contract to sign with Russian third-division soccer team, FC Legion Dynamo. In January of this year, the grappling standout outlined his intentions to transition to professional football, claiming that he was “ready to accept offers“.