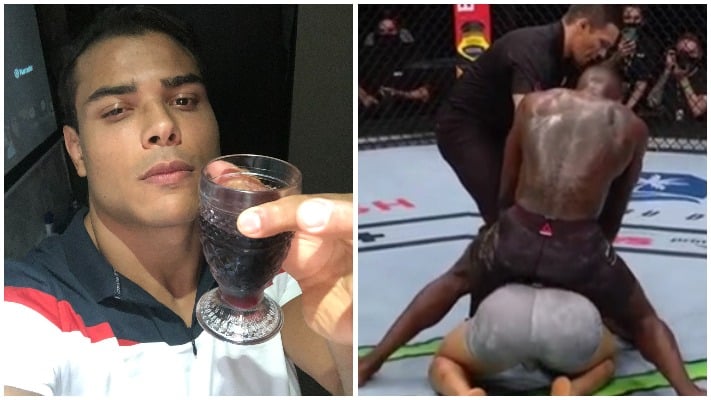 Paulo Costa has finally explained why he chose to get drunk the night before the biggest fight of his life.

‘Borrachinha’ impressively worked his way to a middleweight title shot by beating the likes of Johnny Hendricks, Uriah Hall and Yoel Romero.

The Brazilian squared off against Israel Adesanya for the 185lb title at UFC 253. Costa was picked apart and dominated before being finished inside two rounds in September 2020.

Post-fight, Costa admitted that his poor performance was partially due to the fact he was nursing a hangover after drinking too much win the night before UFC 253.

The 30-year-old explained to Brett Okamoto of ESPN exactly why he thought it was a good idea to drink the night before the biggest fight of his life.

“My weight cut was very hard, but it’s always hard,” Costa said. “The problem is that in Abu Dhabi, the fight happens in the morning, not at night. So, you get one night more [of recovery]. And what happened is, after my weight cut, I had recovered very well. But then I trained so hard. I was so confident, that I trained hard. I trained more than is recommended after a weight cut. And I think this made a lot of problems in my body. I had a lot of cramps and I had a lot of problems trying to sleep.

Costa says it’s not uncommon for him to drink a glass of wine to help him nod off but admits on this occasion he overdid it.

“I had decided to fight. I would not let this fight fall out. After the physical therapist stepped out of my room, I went to my bed but couldn’t fall asleep. I tried melatonin, but it didn’t work. Sometimes I will use one cup of wine when I feel a lot of stress, it’s helped me a little bit, but just one cup, when I have time to put it out of my body. But it was too late. I was desperate to fall asleep.”

The top middleweight contender is set to return to the Octagon on October 23. He’ll square off against Marvin Vettori, who is also fresh off a tough loss to Adesanya.

Do you think Paulo Costa get back in the win column on October 23?