After a quick international break, we’re back for some Premier League action this weekend as Newcastle host Spurs, Chelsea travel to Brentford and Liverpool take on Watford.

Ranieri’s return should be entertaining
Claudio Ranieri is warmly welcomed back to the Premier League this weekend in the early kick-off, and there is reason for optimism at Vicarage Road – in the long term, that is. Watford were already looking strong enough to survive the drop under Xisco but Ranieri’s experience and tactical particulars put them in an even better position.

The Italian likes to play pragmatic counter-attacking football that focuses on a deep line and quick breaks down the wings, which is exactly what Xisco was trying to do before he was sacked. Ismaela Sarr and Emmanuel Dennis will continue to lead the team on the break – and Watford will continue to pick up points against bottom-half clubs.

Probably not against Liverpool, though, who are back to being a brilliantly oiled machine this season. It will be entertaining to see Ranieri back in the dugout, but ultimately a losing start against Jurgen Klopp’s side.

When will Tuchel start trying something new?
When Thomas Tuchel first arrived at Chelsea he had a reputation for constant tactical tinkering, a habit he first developed at Mainz when teams were confounded by the weekly formation changes made in response to detailed scouting reports on the opposition. It is particularly surprising then that Tuchel has only really tried a 3-4-3 or the slightly-different 3-5-2 since becoming Chelsea manager earlier this year.

The system gives excellent width and depth, and when in full flow looks more like a hybrid anyway as they move into the 3-2-5 shape so often taken up by the big clubs these days. But in recent weeks the formation has started to look tired: a bit light in central midfield, too narrow in attack to stretch the opposition, and light in overlapping runs to find space down the flanks. Mid-ranking teams have found that by sitting back a bit they can force Chelsea into tame sideways possession, the knock-on effect being Romelu Lukaku converted into a target man of sorts.

He, and the rest of the team, is not flourishing, and while Tuchel’s in-game tactical switches are still working (his mid-match move from 3-4-3 to 3-5-2 swung the game in Chelsea’s favour against Tottenham and Southampton) it is high time he shakes things up a bit. There is so much attacking quality in his team, and so little of it in the wing-back positions, that sooner or later Tuchel ought to move to a back four.

Brentford away isn’t necessarily the ideal moment to do so, given that Thomas Frank’s side use a 3-5-2 (it’s generally beneficial to mirror a back three, as Chelsea’s opponents so often do) although failure to beat the hosts could be the catalyst for change. Frank’s team have already shown an unusual capacity to rough up stronger teams, using a direct approach to bustle forward on the counter-attack through Ivan Toney and Bryan Mbeumo. This strike partnership should cause Chelsea’s back three all sorts of problems.

Any flatness through midfield, any hesitation in working out how to build into Lukaku, will be punished by Brentford. Their fans can be confident of at least a point at Griffin Park.

Newcastle’s short-term survival is by no means guaranteed
So, how do you feel about public beheadings? What is your stance on bombing Yemen? Do you think murdering journalists and dissidents is a good thing or a bad thing? What do you reckon about oppressive regimes buying football clubs as a PR exercise in soft power to wash the blood off their hands and make themselves more palatable to western investors?

This is an open and shut case, obviously. Yes, Newcastle supporters have been put in a very difficult position and there are no easy choices moving forward, but it is self-evident that Saudi Arabia’s control of the club is horrifying. As Alan Shearer succinctly put it in The Athletic: “We haven’t been consulted. We haven’t had a choice. What we do have is a responsibility to go into it with open eyes.”

He is absolutely right, because to keep one’s eyes open is a necessary vigilance against sportswashing. To their credit, most Newcastle fans – aside from a noisy minority on social media – appear to be doing so, with a survey by the Athletic revealing 83% of Newcastle fans are concerned by Saudi Arabia’s human rights record.

But any Newcastle fan gleefully parading around St. James’s Park with tea towels on their heads ought to be condemned, and it is right that the LGBTQ+ supporters group Unite with Pride’s statement – acknowledging Newcastle United’s new owners are “one of the least tolerant” countries in the world while welcoming the “opportunity” for the takeover to have a “positive influence” on LGBTQ+ rights in Saudi Arabia – has been called out for what it is: disgraceful.

As is so often the case with sportswashing, they have failed to appreciate it in action even as they claim to acknowledge it: “Maybe we’ll change them/maybe they’ve changed” is precisely the (false) image of a progressive, evolving Saudi Arabia this purchase is designed to project.

This is not to suggest Newcastle supporters ought to abandon their club, but rather engage in what is happening in Saudi Arabia and refuse the easy option of whataboutery or burying their heads in the sand. Fans of rival clubs will make this latter option particularly difficult, and the newfound disgust that will be unleashed upon Newcastle adds an intriguing layer to their short-term future.

Some football fans may even feel that actively wishing for the club’s downfall is the best way to battle against the sportswashing attempt; a way for neutrals to keep their eyes open. The initial outrage against these kinds of purchases (such as those by Abu Dhabi and Qatar of Man City and PSG respectively) tends to falter once the world’s best players dazzle on the pitch and the laundry starts coming out clean, but for now Newcastle will face hostile crowds as they battle against relegation.

Until January at least, Newcastle are stuck with the same squad that has not won any of their first seven Premier League games. On the one hand, the mood of the club has been lifted and a better manager will soon be in the dugout. On the other, that hostility will be keenly felt by players who, for the most part, will know their futures lie elsewhere.

There is no guarantee Newcastle will survive relegation this season, not with arguably the third-worst squad in the Premier League. A tricky run of fixtures through until December starts with the visit of Tottenham Hotspur, whose victory over Aston Villa before the international break steadied the ship after a turbulent few weeks for Nuno Espirito Santo. Spurs hold the advantage in all areas of the pitch and should win this. As unfair as it is on the blameless Newcastle supporters, a lot of people would be very pleased to see that happen.

Back the treble: Liverpool to win with a -1 handicap, Brentford to draw with Chelsea, Spurs to beat Newcastle @ just over 14/1 with Planet Sport Bet. 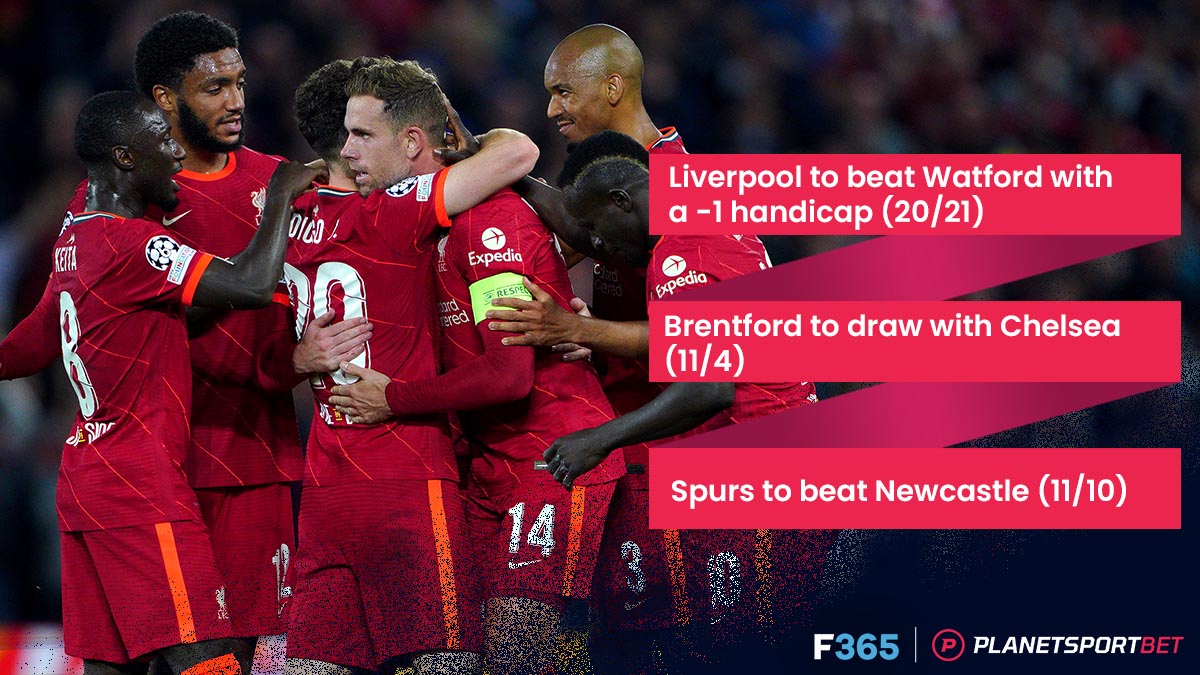 Sterling hasn’t made most of his talent, Chelsea missing Mount and more mails…