Were he still with us, Aaron Pryor would be 66-years-old today. Gone too soon, and taken in the same year that saw the passing of Muhammad Ali, “The Hawk” succumbed to heart disease shortly before his 61st birthday, but like “The Greatest,” he will never be forgotten by serious boxing fans.

Looking back, Pryor was less a bird of prey than the veritable comet or shooting star, a streak of brilliant, scintillating light and then gone forever. Reckless, impetuous, a wild boxing buccaneer, he blazed through the game and then his peak was over, burned out by cocaine and excess and an insistence that everything in his career had to be done his way. Pryor was renowned for being exceedingly stubborn and erratic and impossible to work with. But there was no denying his talent.

Former gold medalist and world champion Leo Randolph, a member of the U.S. Olympic team on which Pryor was an alternate, has been quoted as saying that Pryor “was the best defensive amateur boxer that I have ever seen. I was astounded to see [him] stand in the middle of the ring and his opponent throw every punch possible and not one of them hit Aaron.”

Pryor had just missed the chance to represent his country at the 1976 Olympics in Montreal and instead was on the team as a back-up, and no doubt he watched Howard Davis Jr. and Sugar Ray Leonard win gold medals with a gnawing sense that it should have been him up there defeating the Cubans and Russians.

A couple of years into his professional career and the view that he was being unjustly passed over only intensified. The gold medalists from that historic Olympics had gone on to high rankings and championship wins, and while Pryor had beaten guys like Thomas Hearns and Hilmer Kenty in the amateurs, now they were the ones getting big money and world title matches, while Pryor struggled in obscurity. He was undefeated, 19-0 with 17 KO’s, but outside of his native Cincinnati, few cared about Aaron Pryor. Except for the fact that the other contenders in the lightweight division knew he was one pugilist they did not want to mess with.

Increasingly, “The Hawk” couldn’t land any meaningful fights and it got so bad he had to take up work as a sparring partner to make ends meet, giving rounds to Howard Davis Jr. before he knocked Davis on his butt and lost the job. Prominent trainer Gil Clancy took up Pryor’s cause, approaching the champions and lobbying on Aaron’s behalf, even publicly begging that the top contenders and titlists at lightweight give Aaron a shot, but there were no takers until someone convinced long-time champion Antonio Cervantes to give Pryor his big break.

For the legendary Colombian, it was a huge mistake; Kid Pambele never stood a chance. Pryor took full advantage of the opportunity, unleashing all of his pent up rage and overwhelming the veteran, knocking him out in round four. Finally, Pryor was a world champ, his face on the cover of the boxing magazines, his title defenses on TV. “What time is it?” he shouted at the cameras and his entourage answered back: “Hawk Time!!!” 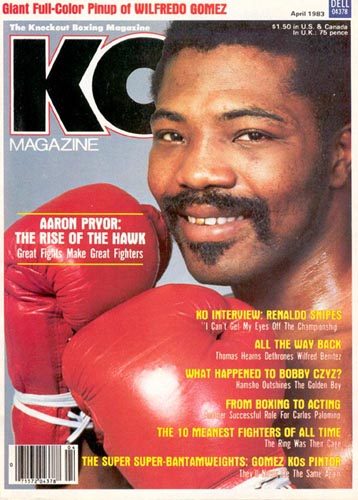 No doubt Aaron anticipated big money deals coming his way now that he held a world title belt but such was not the case. Just as he had watched others get the glory and the medals at the Olympics, now he watched as Hearns, Kenty, and Ray Leonard got the opportunities for big fights and big money. In the meantime Pryor racked up five straight title defenses, all by knockout, and then along came Alexis Arguello, boxing’s triple crown champion and an emerging star in his own right. A Pryor vs Arguello showdown became a hot ticket in 1982, not to mention one of the greatest action fights of all time.

To this day controversy shadows Pryor’s historic first great win over Arguello in Miami. There are two reasons for this. First, the Nicaraguan champion, also known as “El Caballero del Ring,” was exceedingly popular and poised to become a huge star with a win over Pryor and a fourth world title in four weight divisions, something that had never been done. Millions of Latin fight fans were heartbroken when Pryor stopped Arguello after a thunderous, back-and-forth war.

And second, the suspicion of foul play arose after microphones had picked up Pryor’s trainer at the time, Panama Lewis, calling for a special water bottle, the one he had “mixed,” before the start of round 14. Pryor swallowed from the bottle and them stormed out of his corner to batter and stop an exhausted Arguello, and no urine tests were conducted following the match. Skepticism about this incident only intensified when the following year Lewis was condemned for tampering with the gloves of Luis Resto before his bout with Billy Collins. Lewis was banned from boxing for that despicable crime.

In the eyes of this observer, all of the speculation surrounding the first meeting with Arguello is hugely unfair to Pryor. No stimulant was responsible for his amazing performance that night, but instead talent, toughness and an iron-clad refusal to lose. And the clear-cut evidence for that is the outcome of the Arguello vs Pryor rematch a year later, when the Nicaraguan actually performed better, but it didn’t matter. Pryor, with no Panama Lewis in his corner, was just too strong, resilient and vicious and the result was another stoppage defeat for Arguello, this time in round ten. The simple fact remains: Pryor was an absolute beast, a non-stop whirlwind with terrific power and the unique ability to throw devastating shots from unexpected angles.

“Aaron Pryor was the original Manny Pacquiao,” says veteran trainer Nazim Richardson. Sadly though, Pryor lacked Pacquiao’s longevity. The money he earned from the two Arguello bouts didn’t stay in his pockets for long and much of it went to fuel a cocaine addiction that overwhelmed him and which he battled off and on for years thereafter. Thankfully, he eventually overcame his addictions and his demons to become a loving husband, father and grandfather.

Perhaps frustration and heartbreak and the conviction that he could never receive his just reward or his rightful opportunities had something to do with self-destructive choices. Despite his many victories, his appearances on national television, and his time as a world champion, Pryor could never shake the feeling that he deserved better. Sitting on the sidelines at the Olympics was in the past, and yet he could only sit and watch as Sugar Ray Leonard, Roberto Duran and Thomas Hearns — a fighter he had defeated in the amateurs — earned massive paydays and became crossover stars.

The Arguello clashes were big, but not on quite the same level, and the closest Pryor ever got to a multi-million dollar superfight was when Leonard gave serious consideration to granting Pryor a shot at his welterweight title in 1982. Sugar Ray was the biggest name in boxing at the time and a Leonard vs Pryor match would have meant huge money for “The Hawk.” A victory — which, believe it or not, was a distinct possibility — would have made Pryor a superstar.

At the time of these negotiations Leonard was training for a tune-up match with Roger Stafford and while in camp he realized something was wrong with his vision. Doctors diagnosed a detached retina and Leonard immediately underwent surgery. As Pryor told it, he was driving when he heard on the car radio of Leonard’s decision to retire and he immediately pulled over to the side of the road and cried like a baby.

In this pundit’s opinion, a battle at that time between Aaron “The Hawk” Pryor and Sugar Ray Leonard would have been an absolute classic, a truly great fight, and Pryor would have triumphed in a manner not dissimilar from how Roberto Duran defeated Leonard in 1980. Unrelenting pressure, a breakneck pace, non-stop punching, plus Pryor’s power and amazing stamina, would have all spelled huge trouble for Ray. Don’t forget, it would have been a 15 round fight and I envision Pryor steamrolling a tired Leonard in the later rounds to secure a points win.

Idle speculation of course, but totally appropriate on the anniversary of Aaron Pryor’s birth. You’re no longer with us, champ, but you’re not forgotten. You were a great one, a tremendous talent with amazing heart and talent and courage. And for this fight fan, it will always be “Hawk Time!”       — Robert Portis

IPL 2022 Retention: ‘It’s Been A Journey That’s Changed My Life’