The Premier League is back this weekend as Arsenal travel to Leicester, Man United look to bounce back against Spurs and Norwich host Leeds at Carrow Road.

Lose the ball, run away from the ball
Sack race specials like this one always feel a bit weird, but maybe especially so this season after the pandemic-infused fallow year of 2020/21 when only four mid-campaign managerial changes were made – a 16-year low. There was a lot more leeway in empty stadiums, when the football felt a little ghostly and unreal, and the emotions, the fury, the indignation was dampened by the solitude of the spectacle.

But the Premier League is back to its screaming, red-faced best, and casting the mind back to pre-Covid times, autumn was always the most active time in boardrooms. Around October and November the table has settled down, the beginning has ended and panicky executives are starting to wonder if lurching wildly in a new direction might boot their club up the charts.

Ole Gunnar Solskjaer and Nuno Espirito Santo are in very different situations, one nearing the end of a long journey carried by blind optimism and the other approaching the final part of a very short walk, dragged to the floor by a heavy despair. Yet the particular characteristics of what is happening on the pitch are relatively similar: both the Manchester United and Tottenham Hotspur players look like they have no idea what they are supposed to be doing.

Neither team is being coached properly in terms of actually constructing their attacks, which means both teams are more effective when allowed to counter-attack. This Saturday, with the pressure mounting and the players hesitating nervously on the ball, nobody is going to want to seize the initiative. That means a dull game low on quality – and goals.

Style clash should provide entertaining game
In direct contrast, in the lunchtime kick-off there ought to be a lot of goalmouth action thanks to the clash in styles, the upbeat demeanour of the two teams and the detail and structure in how the sides are coached when holding possession. It will be everything the Spurs v Man Utd game is not, complete with purpose, game-plans and goals.

Brendan Rodgers and Mikel Arteta are both eyeing the fourth Champions League spot which, judging by the United board’s apparent continued backing of Solskjaer, is likely to be up for grabs come the end of the season. That makes their meeting in Leicester particularly intriguing, especially since neither Leicester City nor Arsenal have managed to play with any real consistency so far this season. Both are liable to collapsing; both are capable of putting a surging run together. It’s a six-pointer worth more than it looks on paper.

There will a lot of space in this game, a lot of chances for the two managers’ respective pursuit of quick, vertical football built out from defence to come good. Leicester’s back three, finally reinstated, has sharpened Youri Tielemans and James Maddison higher up the pitch, and the team’s 3-4-1-2 shape sits troublingly in the gaps around Arsenal’s 4-2-3-1. More worrying still is the thought of in-form Jamie Vardy and Patson Daka making runs on the outside of Arsenal’s error-prone centre-backs.

At the other end, Leicester’s defence is looking very leaky. They have conceded eight goals in their last four games and appear vulnerable to the renewed vigour of the Pierre-Emerick Aubameyang and Alexandre Lacazette partnership. Expect big open patches of green, some lovely one-touch football and an entertaining 90 minutes.

Crucial moment for Bielsa to prevent heads from dropping
Leeds United needed something to wake them up, to break through the gloom with a serotonin hit, and they got it last weekend when Rodrigo’s 93rd-minute penalty made a 1-1 draw with Wolves at Elland Road feel like a win. Marcelo Bielsa needs to ensure they use this momentum to get some wins under their belt and move back up the table.

Supporters get frustrated by any talk of jaded players and burn out at Leeds, which is perceived as a lazy stereotype about Bielsa. But it isn’t. He has never been at one club for this long and, historically, his teams do always reach the point where his physically and psychologically demanding strategy leads to a sudden disbelief, a switching-off.

That’s not to say it will happen, or is currently happening, but pundits are right to be wary of the possibility – which is why following a difficult start to the campaign Leeds need to collect a simple three points at Carrow Road. Norwich City’s 7-0 defeat to Chelsea last weekend showed they are not up for the fight and are in real danger of setting a new Premier League record low points tally.

There is no excuse for Leeds to drop points. If they do, it will be time to worry about their battle against relegation. They should just about have enough to win.

Back the Treble: Over 3.5 goals in Leicester v Arsenal, under 2.5 goals in Spurs v Man United, Leeds to beat Norwich at 12/1 (Planet Sport Bet) 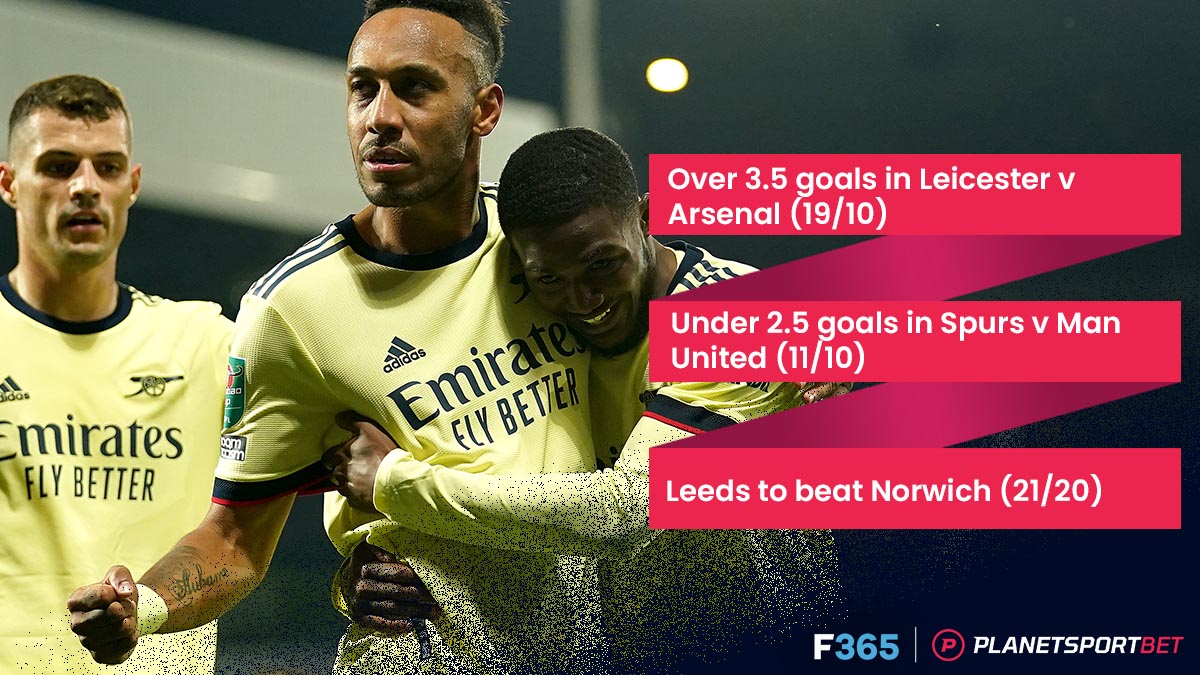